Seals are a type of marine mammal found in different parts of the world. They can live in both polar and tropical waters. Seals are found in various places and number more than 30 species. They are excellent swimmers who have been known for holding their breath underwater for up to two hours! Seals only come ashore to avoid predators such as whales and sharks, as well as to mate, give birth, feed, and molt. Keep reading to learn ten incredible facts about these marine animals.

1. The Baikal Seal is the Only Freshwater Seal in the World

The Baikal seal, one of the smallest true seals, marks the seal’s evolutionary transition from terrestrial to semi-aquatic. Seals most probably spent time in freshwater before moving to the oceans. Lake Baikal, a freshwater lake in Siberia, is home to a diverse range of fascinating animals and is the world’s oldest and deepest lake.

During a fifteen-minute dive, hooded seals’ brain temperature dropped by three degrees Celsius, indicating that the brain was using less oxygen. The seals sent cold blood to their brain via their front flippers’ prominent superficial veins, lowering the brain’s oxygen consumption by 15-20%. This significantly increases a seal’s diving capabilities while protecting it from hypoxic harm.

3. Badgers, Skunks, and Bears are all Related to Seals

Evolutionary biologists have debated the origins of seals for more than a century. While scientists are confident that pinnipeds descended from land-dwelling predators, they disagree on the exact stages between terrestrial predecessors and present marine mammals. Along with the three subclades of Ursidae (bears), pinnipeds, Mustelidae (weasels, otters, badgers, and relatives), and Mephitidae make up the suborder Caniformia (skunks and stink badgers). A relatively complete skeleton of a novel semi-aquatic carnivore was discovered in 2007 in an early Miocene lake deposit in Nunavut, Canada. It became renowned as an evolutionary link between land animals and seals.

4. Leopard Seals are Among the World’s Top Ten Most Enormous Seals

Female leopard seals, the bigger of the two sexes, can weigh up to 590 kilograms (1,300 pounds) and reach a length of 3.5 meters (10 feet). Their bodies are slender and long, while their heads seem almost too big for their serpentine bodies. Leopard seals can push themselves along the water at high speeds up to 18mh because of their sleek design and abnormally large fore flippers. Only walruses and elephant seals are bigger than leopard seals in the polar ocean.

The leopard seal is named from the spotted pattern on its skin that is dark on top and light on the bottom. It has a large, almost reptilian-like cranium, strong incisors, and enormous jaws that set it apart from other genuine seals. Due to these adaptations, it is an apex predator in its area and only faces regular predation from the considerably larger orca whale. Krill, squid, fish, and even some birds are among the varieties leopard seals consume.

5. A Young Seal is Called a Pup

Pups are young seals considered pups from the time they are born until they are weaned around the age of one year.

To survive, the newborn seal must learn to swim and catch food on its own. While learning to hunt for themselves, many baby seals lose nearly half of their body weight.

The adolescent seal stage comes next. The seal will have learned to catch its prey and swim during this stage. So now, all that’s left is to put on some weight to survive the cold, brutal winter.

The adult seal is the last stage of their growth cycle. Seals are considered adults at the age of six and can live for up to thirty years, depending on whether they are male or female.

Generally speaking, seals will not attack humans on purpose or out of nowhere. Although they are highly unusual, there have been a few accounts of seal attacks. Seals aren’t hazardous; even if they bite, they can’t kill you because they’re not venomous or carry rabies. Even though seals are mammals, they are rarely infected with rabies since rabies is more common in terrestrial mammals. Seal bites, however, can spread illnesses, including the infamous ‘seal finger,’ a typical seal bite result.

7. The Diets of Seals Vary

Seals eat a variety of species, with the majority relying on seafood acquired at sea. However, there are a few species that defy the stereotype.

Leopard seals, for example, rely on hunting penguins and even other seals to make a living. Meanwhile, walruses eat clams and other shellfish that they trace with their incredibly sensitive whiskers before sucking up their muscular lips from the seafloor.

The crabeater seal is an Antarctic pinniped species. On the other hand, these animals do not consume crabs—at least not the ones you might expect. Instead, these seals filter water for Antarctic krill, a small, plentiful crustacean.

True seals are also known as earless seals, however, they have ears. What these seals lack is a pinnae. The pinnae is the scientific name for the visible external ear. The tiny holes at the sides of an earless seal’s head can be seen when you look at them closely. But earless seals do not have external ears that can be seen from the outside. Seal internal ears resemble those of other animals.

Interestingly, seals have significantly greater hearing underwater than they do on land. Their hearing is comparable to other mammals’ hearing on land, though slightly less sensitive. This is due, in part, to the fact that their especially lengthy ear canals are frequently blocked by wax.

Overall, compared to other animals, seals’ absence of external ears does not significantly affect their ability to hear above water. The ability of seals to hear underwater is even more astounding. They are far better than animals with ear flaps at determining the direction of a sound because they lack external ears.

9. Male Seals Battle for the Privilege to Mate

When mating season arrives, male seals make deep, throaty sounds to seek females’ attention. A male seal will scream to other male seals to let them know his ladies have been claimed. When it comes to mating, males are very territorial. They’ll claim the right to mate, striking and biting one other. The winner will mate with up to 50 local females.

The Southern elephant seal can reach up to 4 meters in length and weigh up to two tonnes. That’s about as heavy as a huge car!

Southern elephant seals (Mirounga leonina) live in sub-Antarctic and Antarctic waters that feature brutally cold conditions but are rich in squid, fish, and other marine foods these seals enjoy. They breed on land but spend their winters in the frigid Antarctic waters around the Antarctic pack ice.

Of all seals, the southern elephant is the largest. Males can reach lengths of up to 16 feet and weigh up to a whopping 6,000 pounds. These huge pinnipeds, however, are not known as elephant seals for their size. Their trunk-like inflatable snouts gave them their name. 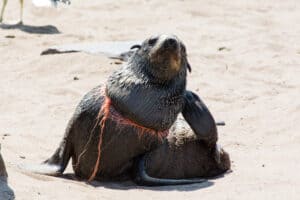