The crabeater seal doesn’t actually eat crab at all, but instead krill

Click through all of our Crabeater Seal images in the gallery. 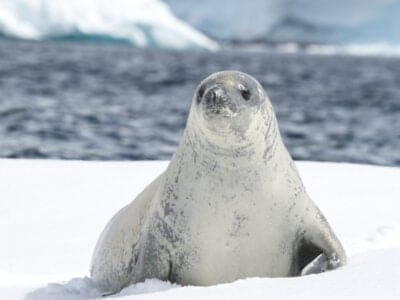 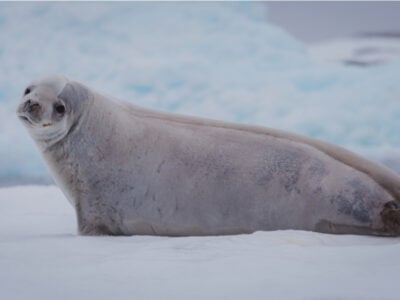 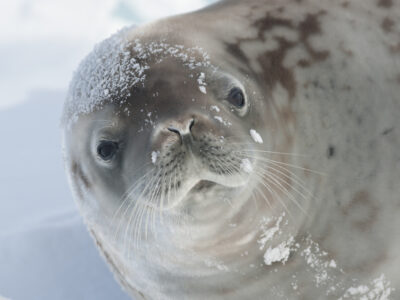 View all of the Crabeater Seal images!

The crabeater seal has carved out a very successful life in one of the most inhospitable places on the planet.

Found almost everywhere around the Antarctic seas, it is believed to be one of the most abundant and populous of carnivorous mammals. However, the crabeater probably suffers from the biggest case of misnaming in the entire animal kingdom. They do not eat crab at all (few of which even live in the Antarctic); instead, they eat tiny crustaceans called krill that live relatively close to the surface. A better name would be the krill-eating seal. Unfortunately, because of their isolated environment, there are still some facts about them that we don’t understand.

The scientific name of the crabeater seal is Lobodon carcinophaga. Lobodon comes from a Greek term meaning lobe-toothed, whereas carcinophaga roughly translates to mean crab eater. This species is the only currently living member of its genus, but it does share common ancestry with the leopard seal, Ross seal, and other Antarctic seals. The crabeater belongs to a family known as the true seals, which are characterized by the lack of external ear flaps and an inability to rotate their hind flippers under their body.

The crabeater seal is characterized by a long body and big skull and snout compared to other seal species. The coat is blotched gray-brown during the summer and then transforms into white or blonde following the late summer molt. It normally measures somewhere between 6.6 and 8.2 feet and weighs up to an astonishing 500 or 600 pounds. Females are slightly larger, on average than males, but their body weight fluctuates substantially throughout the year.

They lose nearly half their weight while nursing the baby pup on their nutrient-rich milk. The thick layers of blubber help them remain insulated in the frigid Antarctic waters.

The crabeater seal sometimes gathers together in large groups for protection. Young pups in particular will congregate in groups of up to a thousand individuals. As they age, the seals may become solitary or live in small groups of only three or four. Their behavior is largely associated with fluctuations in the ice packs. When ice packs start to melt, they may travel long distances to seek refuge elsewhere.

While adults tend not to be too vocal, the crabeater has several ways to communicate. Males in particular will produce a few types of mating calls, including both a low and a high moan. If it feels threatened, then the seal may hiss, snort, bare its teeth, and roll over. This may help it to get away from potential threats.

Despite how much time they spend on ice packs, crabeater seals are mostly adapted for the water. Because their hind flippers are fused to the pelvis, these seals cannot bring the legs under their body to walk on them. To move on land, they curve their body back and forth in a snake-like motion. This enables them to reach speeds of up to 15 miles per hour in short bursts, the fastest of any seals in the world. When it’s in the water, the crabeater uses a combination of its hind flippers to propel forward and its front flippers to steer. They can reach speeds of around eight miles per hour consistently in the water.

Many people often wonder whether seals can breathe underwater. The answer is no, they cannot. Seals need to breathe air just like any other mammal. But they do have the remarkable ability to remain underwater for up to 11 minutes at a time, thanks to particularly rich oxygen stores and the ability to seal their nostrils shut.

Most seals forage at depths of around 100 feet, but the maximum possible depth they can dive is thought to be around 1,400 feet. Eventually, though, crabeaters are forced back to the surface to breathe. When the water is frozen over with ice, they will use the breathing holes created by Weddell seals, even chasing the smaller seals away.

For much of the year, the crabeater seal can be found around the coasts and ice packs of Antarctica. During the winter, it travels farther north with the expansion of ice packs. Some seals have even appeared as far away as Australia, New Zealand, South Africa, and the southern tip of South America, though this is uncommon behavior. Sometimes, a seal will lose its bearing and end up well off course, toward the interior of Antarctica.

Isolated in the extreme south, the crabeater faces few threats from humans. Predators seem to be the most pressing problem daily. However, climate change may prove to be a massive threat in the future. Dissipating ice packs will expose the seal to predators and reduce its natural birthing grounds.

What eats the crabeater seal?

Because of its sheer size and ferocity, an adult crabeater seal is a formidable foe. The killer whale is one of the few species large enough to hunt them. Seals are quite exposed in the water and risk being eaten. If the seal manages to escape from their grasp by climbing on ice, then packs of orcas may attempt to tip over the ice by creating waves in the water. Juvenile crabeaters also face significant predation from leopard seals. It’s estimated that as many as 80% of all immature crabeaters are killed in this manner. Many adults still carry scars that testify to the seriousness of these attacks.

What does the crabeater seal eat?

The crabeater seal is specialized for consuming Antarctic krill. The teeth have complex and jagged cusps (the points at the ends) to filter out krill from the water. The seal will swim through a group of krill and suck up whatever it can into its mouth. Small fish and squid also make up around 5% of its diet.

Crabeaters reproduce and then give birth directly on the pack ice. The reproductive season takes place at some point between October and December. Following an 11-month gestation period (in which the female may have the ability to temporarily suspend the development of her newly fertilized egg), the mother will give birth to a single baby, which weighs about 44 pounds and is otherwise helpless. While she’s nursing the baby on her milk, a random male who’s almost certainly not the father will join them on the ice and protect them from predators and other males. His intention seems to be entirely selfish. He is waiting for the female to become sexually receptive again so he can mate with her. This protective gesture simply seems to be his way of establishing his mating rights over other males.

Since they are born so close to the next mating season, pups grow at an astonishing rate. They gain nearly ten pounds a day until they’re fully weaned at around three weeks of age. There appears to be little parental involvement from this point forward. However, even after gaining independence, the seals still have a lot of growing to do. They reach sexual maturity at around three or four years. Many females can successfully reproduce until around 25 years or so. They are thought to live around 40 years in the wild.

According to the IUCN Red List, the crabeater seal is a species of least concern. It is thought to be the most common species of Pinnipeds (seals and sea lions) in the world, with an estimated population of somewhere between 7 million and 70 million. More likely, population numbers probably fall within the range of 20 to 40 million. The numbers can be difficult to estimate because some parts of Antarctica are a challenge to access during parts of the year.

What is a crabeater seal?

The crabeater is a semi-aquatic member of the true seal family. It’s one of only a handful of seals (along with leopard and Ross seals) that hails from Antarctica. It is mostly distinguished by the elongated body, big skull, and gray-brown coat of fur that becomes white in the fall and winter. It spends all of its time either swimming in the water or hauling out onto ice packs.

The crabeater is actually carnivorous because the krill is a tiny crustacean.

How did the crabeater seal get its name?

The name originated because, at the time, this species was thought to feed on a wider range of crustaceans, not just krill. Crab was sometimes used interchangeably with just about any crustacean in the wild.

What do crabeater seals do?

Crabeaters spend most of their time resting on ice packs or hunting and exploring in the water. Most dives only last a few minutes long and are intended to look for krill. Hunting appears to mostly occur at night.

How many crabeater seals are there in Antarctica?

Population estimates vary substantially because some parts of Antarctica are difficult to access, but there could be anywhere between 7 million and 70 million crabeaters in the wild. The higher end of the range seems unrealistic; the true number is probably no more than 20 to 40 million. But they are surprisingly plentiful, given the extreme inhospitable nature of their environment.

How do crabeater seals adapt to Antarctica?

The seal’s blubber provides all the necessary insulation to keep them warm and comfortable. Their main food source, the krill, is particularly abundant in Antarctic waters. And they’re very well-adapted to using the ice for safety and protection.

What is the scientific name for crabeater seal?

What does the crabeater seal eat?

Despite the name, the crabeater actually consumes krill, a tiny crustacean that serves as one of the most important food sources in many marine environments around the world. They kind of resemble small shrimp.