Written by Jennifer Gaeng
Updated: October 7, 2022
©
Share this post on:
More Great Content:
Dogs With The Highest Bite Force
This Prankster Coyote Wasn’t Ready for a…
The 10 Most Dangerous Dog Breeds in…
Belgian Shepherd vs German Shepherd: 5 Key…
The Top 8 Oldest Dogs Ever
American Bully Vs American Bulldog: Is There…

The Yorkshire Terrier, or Yorkie as it is more commonly known, is a small dog breed that belongs to the terrier family. The breed matured in Yorkshire, England, in the 19th century and should weigh no more than seven pounds. Popular as a pet, the Yorkshire Terrier is credited for helping to pave the way for the development of several other dog breeds, notably the Silky Terrier. Their coat coloration ranges from black and brown to silver-grey to blonde. Ready to learn more? Here are 10 Incredible Yorkshire Terrier Facts!

1.      They Rank As The Sixth Most Common Dog Breed In America

Presently, the Yorkie ranks sixth among dog breeds in popularity in the Americas, and the AKC confirms this to be the case. This dog’s small stature and friendly disposition have made it a hit in the United States. The United Kingdom (where the breed was first seen) is not the only place it has found widespread acclaim.

2.      Yorkshire Terriers Are Named After The Area They Were Bred In The 19th Century

These days, people call them Yorkies. The Yorkshire Terrier’s appearance formerly varied significantly, but these distinctions have been eliminated via breeding. At one time, the term “Yorkshire Terrier” was used to describe practically any terrier-type dog with a long coat and coat colors of blue, silver, and tan.

One thing that is known is that three separate dogs were used to develop the breed known as the Yorkshire Terrier. It is thought that the Maltese and Paisley Terrier were employed in the early stages of breeding. Although they were developed using Scottish terriers, they are known as Yorkshire Terriers to honor the region in which they were developed.

4.      Yorkshire Terriers Have Two Sets Of Teeth In A Lifetime, Just Like Human

An adult Yorkshire Terrier typically has 42 teeth. This can occasionally change, but it is usually not a problem until a serious bite results. The overcrowding of teeth in Yorkshire Terriers is one issue caused by their narrow jaws, and poor dental health may result if this happens. To avoid further health issues, a veterinarian may need to clean them professionally.

A puppy will initially be toothless, and between the ages of three and eight weeks, their first teeth will start to erupt. They will lose these teeth at around four months of age, and the second set will develop. A Yorkshire Terrier will have two sets of teeth during their lifetime: their milk teeth and their adult teeth, just like humans and the majority of other dog breeds. Their milk teeth, also known as deciduous teeth, have 28 teeth.

5.      True Yorkshire Terriers Only Have One Coat Color

The Yorkshire Terrier has one approved coat color, unlike many other breeds. A Yorkie has a brown coat and a blue saddle. Variations are called “parti-colors.” Parti-color dogs are white with black, blue, and tan. It’s recessive and rare.

Unusual-colored dogs have health risks. Yorkshire Terrier coat color may take about three years to develop. Some say puppies shouldn’t compete because their genuine coat color could prohibit them from becoming legally recognized.

6.      A Famous Yorkshire Terrier Had Its Own Show

The most well-known Yorkshire Terrier in history, Huddersfield Ben, is just one of several notable breeds. He established the standard for the breed as we know it now, which is why he is so well-known. A breed expert once referred to him as the breed’s greatest dog because of his outstanding competition performance.

Huddersfield Ben was a show and stud dog owned by Mary Ann Foster. He quickly earned the reputation of being the breed standard due to his excellent qualities. Famous portrait artist George Earl painted Huddersfield Ben in 1891. He had many pups because everyone wanted a dog just like him. Even today, he is frequently referred to as the breed’s founder.

7.      Yorkshire Terriers May Be a Good Fit If You Have Allergies

The Yorkshire Terrier’s hypoallergenic coat is just one of the breed’s many appeals. This is because they often only shed a tiny amount when brushed or bathed, compared to other long-haired dog breeds. There will be very little dog hair in and around their homes, which is wonderful for people allergic to dog hair.

Usually, a Yorkshire Terrier’s saliva or dander will cause an allergic reaction if a person is sensitive to them. According to some scientists, dogs have unique proteins that can cause an allergic reaction in some persons but not others, refuting the claim that the Yorkshire Terrier has a hypoallergenic coat. Therefore, their lack of shedding may have little or no impact.

Yorkshire Terriers may have a high risk of developing various genetic disorders. Distichiae is the most common of these common medical conditions. These follicles produce eyelashes in a peculiar place close to the eye. Corneal ulcers, squinting, corneal abrasions, and general discomfort may also develop.

9.      There is an Unofficial Variation of the Yorkshire Terrier that Comes With Health Risks

Teacup Yorkies are too small to give birth normally and require a cesarean section, which could kill the mom and her offspring. Teacup Yorkies have greater health difficulties than ordinary Yorkies. These disorders include hydrocephalus, epilepsy, luxating patellae, chronic pelvic pain syndrome, and open fontanels.

10.   A Yorkshire Terrier Once Took Residence in the White House

Many famous people have had Yorkshire Terriers. For example, Tricia Nixon Cox, the daughter of the 42nd President of the United States, Richard Nixon, was one of them. Her dog, Pasha, was a White House resident while Richard Nixon was in office. Not only did Patricia Nixon Cox have a Yorkshire Terrier, but so did Ivanka Trump, the eldest daughter of former President of the United States, Donald Trump. Even more elite people have had Yorkshire Terriers as pets, likely contributing to the breed’s continued popularity among A-listers.

Watch Two Grizzlies Have a Heated Debate On the Beach 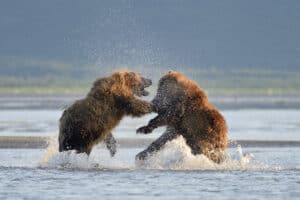