This breed is nicknamed the “Diehard” because of its iron will and steely determination.

Fun Fact
This breed is nicknamed the “Diehard” because of its iron will and steely determination.
Temperament
Confident, independent, and alert
Diet
Omnivore

Scottish Terrier as a Pet:

Click through all of our Scottish Terrier images in the gallery. 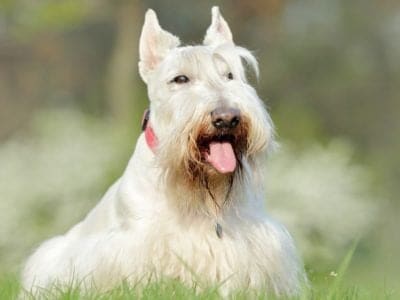 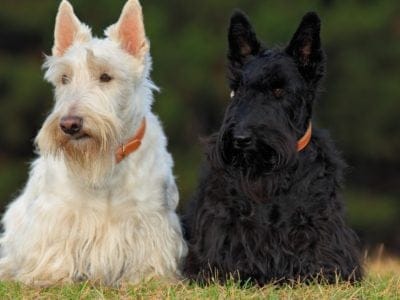 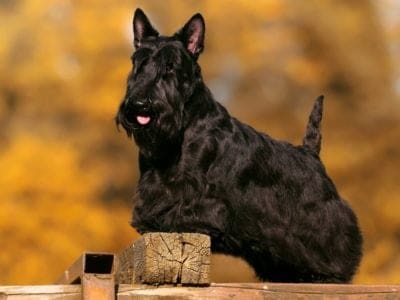 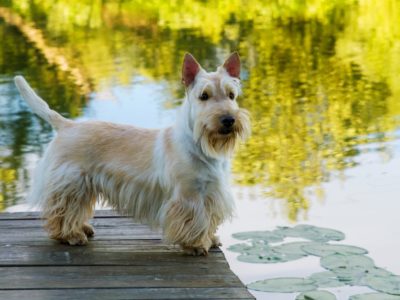 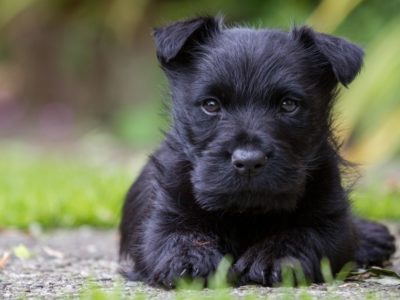 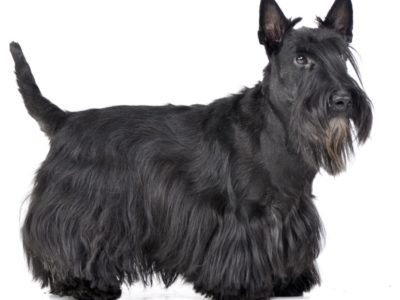 View all of the Scottish Terrier images!

The Scottish Terrier is a miniature, short-legged breed with a big personality and self-confident style. It was originally bred in the Scottish Highlands, probably sometime between the 15th and 18th centuries, to hunt and kill vermin and small game. Terrier derives from a Latin word that literally means earth dog, perhaps referring to its tendency to hunt along the ground. The first of this breed to be registered in the United States was a dog called Dake in 1884.

The Scottish Terrier has a distinctive appearance, with its well-defined eyebrows and beard, which some may say make it appear old and wise. The dog’s coat combines two different layers: a coarse, wiry outer layer and a dense, soft lower layer. It comes in a mix of a few different colors, including all black, a pale yellow or almost white color called wheaten, and a striped or irregular pattern called brindle.

3 pros and cons of owning a Scottish Terrier

The Scottish Terrier is a miniature but sturdy breed with short legs and a low frame. Males and females are approximately the same sizes.

The Scottish Terrier is a fairly healthy dog with an average lifespan of around 12 years. This breed is most prone to cancer, cataracts, glaucoma, craniomandibular osteopathy (a genetic condition causing excessive bone growth in the lower jaw), and a unique condition called Scotty cramp (which can cause spasms throughout the dog’s body, sometimes preventing it from walking). On the first visit to the vet, it is also recommended to have separate tests for Von Willebrand’s disease (a bleeding disorder caused by low clotting proteins) and patella (kneecap) issues. To sum up some of the most common health problems:

The Scottish Terrier has a strong, independent, and indelible personality that some have described as almost-human-like. Its confident and tenacious demeanor seems to belie its miniature size. This makes them surprisingly good watchdogs. When a stranger approaches the home, it may try to bark and alert its owner. But unless properly trained from an early age, they can be a little distrustful of and aggressive toward strangers. Their relationship with other dogs can be contentious as well, and sometimes their hunting instinct will take over and cause them to chase smaller animals. That is why it’s crucial to socialize it as a puppy to avoid these behaviors. Fortunately, the Scottish Terrier doesn’t require too much space, so they are able to live in both apartments and houses without any problems.

How to Take Care of the Scottish Terrier

The Scottish Terrier is a better choice for experienced dog owners than first-time owners (particularly due to difficulties with training), but anyone who’s willing to put in the time and effort can end up loving this breed. If you decide that this breed is right for you, then you should try to find a high-quality breeder in your area that adheres to the breed standards and only breeds the best dogs. Another good option is a rescue or adoption group that takes in this breed. Rescue groups care quite a bit about the health of their dogs. Once you bring your dog home, it will need regular, semi-frequent physical examinations at the vet to check for any abnormalities and problems. If you have any other concerns about the dog’s routine, then you should consult with the vet.

Health and Entertainment for your Scottish Terrier

The Scottish Terrier should thrive on about a cup of dog food per day, depending on its size, age, and activity level. The American Kennel Club recommends a diet consisting of about 25% protein with a bit of canned food added in. If it’s fed the right diet, then the dog’s coat should be smooth and healthy with no signs of flaking.

The Scottish Terrier needs to be brushed with a simple pin brush and comb around two to three times per week to prevent tangling and matting. Wiry-coated breeds like the Scottish Terrier should also be hand stripped once a month or so. Hand stripping is a method of removing dead hairs from the top layer by hand. This will keep the consistency of the entire coat intact.

Otherwise, if the coat is merely clipped, then it will lose some of the harsher outer layers as the softer lower layer will become dominant. If you are having trouble hand-stripping the fur yourself, then you might want to find a professional who will do it, but you should be aware that not all groomers will be familiar with this method. Besides attending to its grooming needs, you should brush the dog’s teeth, preferably every day, using a soft-bristle brush and canine toothpaste. You should also perform regular ear checks and give occasional nail trimmings whenever the need arises.

The Scottish Terrier has an independent and stubborn streak that has earned this dog an unfair reputation as difficult to train. But in fact, this breed is very alert, inquisitive, and responsive to human commands. The main problem is that the Scottish Terrier has a tendency to become bored very quickly. It does not respond well to repetitive, mind-numbing tasks. Instead, it likes to exercise its mind and creativity. This means owners should limit training sessions to 15 minutes each time and try to constantly change the routine to prevent boredom. Scottish Terriers are very attentive to changes in the human voice and respond best to positive reinforcement methods. If you are struggling a bit to train this breed, then you might want to enlist the help of a professional trainer.

The Scottish Terrier needs around a moderate amount of exercise, or around 30 minutes, every single day. Fortunately, this dog does not require a lot of space. While a yard or park is always welcome to stretch its legs, the Scottish Terrier will enjoy playing with balls and toys around the home. It should also be taken on short walks or jogs while on a leash at least for a little bit each day.

It is always recommended to purchase puppies from high-quality breeders or rescue organizations that really care about the health of their dogs. Puppies should never be purchased from low-quality breeders and puppy mills, which are more likely to overlook health problems. You should also be prepared for the puppy’s training. Within the first few months of its life, the Scottish Terrier needs proper socialization to overcome its natural tendency to distrust strangers. Training sessions, dog parks, and gatherings with families and friends are all excellent places to start.

Dogs Similar to the Scottish Terriers

The terrier group contains many dogs with similar appearances and personalities as the Scottish Terrier. Here are just a few examples of them:

The Scottish Terrier is a very famous breed that reached the heights of its popularity in the 1930s and 1940s. Dwight D. Eisenhower, Franklin Roosevelt, Queen Victoria, Humphrey Bogart, Jacqueline Kennedy Onassis, Rudyard Kipling, Bette Davis, and Lech Kaczyński (a former president of Poland) have all been the proud owners of a Scottish Terrier at some point. Roosevelt’s dog, Fala, was even immortalized with a statue at the former president’s memorial in Washington, DC. This dog also had a role in the 1955 animated film “Lady and the Tramp.”

Popular Names for the Scottish Terrier

If you are looking for a good Scottish Terrier name, then you might want to consider the following options:

What is a Scottish terrier?

The Scottish Terrier is a small vermin-hunting dog breed with a strong, confident, and independent personality. Potential owners may be attracted to the dog’s stout appearance and long, wiry fur, especially around the mouth and eyes.

That depends on what you look for in a dog breed, but the Scottish Terrier is very friendly, playful, and affectionate toward anyone it trusts.

The Scottish Terrier can be quite friendly and affectionate, but they are not lapdogs and should be given their own space.

How much do Scottish Terriers cost?

A Scottish Terrier can cost as little as $300 to adopt, but the average price is more like $800. If you want your dog to have a particularly illustrious pedigree, then it will cost significantly more: perhaps thousands of dollars.

Can Scottish Terriers be left alone?

Each dog might be different, but the breed as a whole shouldn’t be left alone for too many hours, or else it might become anxious and bored.

What is the bite force of a Scottish Terrier?

This breed does not have a particularly strong bite force, at least compared to the bite force of many larger breeds. But it does have the tendency to bite or chew things. This can be dissuaded with the proper training.