Congratulations on your new family member! Or maybe you’re still on the fence! Either way, your dog will need a cute and unique name, right?

You want a name that’s distinctive and unique, cool, creative, and fun. You also want a practical name. Yes, you can name your female Aphrodite or your male Apple Jack. But good names make sense and generate appeal. You should prefer a name that’s a little uncommon but not too bizarre. Don’t worry so much about popular names. The world has its fair share of canines responding to Fido, Butch, and Spot. Go with a name that distinguishes your doggy from the rest of the dogs in the park.

Cute dog names don’t come easy. What’s coming up is a list of cute and unique dog names. But before that, let’s look at choosing names.

Continue reading to find the best ways to get the perfect pooch names.

Keep It at Two Syllables

The sweet spot is two syllables. Owners who give dogs long names tend to shorten them anyway. So why not just go with the shorter version from the git? 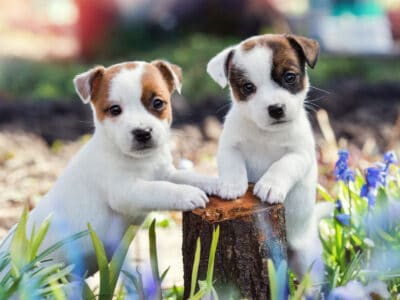 People love to play with names. Michael becomes Mike, Mikey, Mike-a-rolla, Big Mike, or whatever else feels right. Pick a name and recite to yourself what he might be called. Take note: dogs hear the affection but altering names won’t mean you’re not confusing them.

Vowels impact tone. Dogs hear frequency ranges at higher levels than humans. Names with vowels, especially ones that end with a vowel, are more likely to draw a pooch’s attention.

Don’t Pick Names Your Dog Might Confuse With Commands

Name your dog “Bo” and she might mistake it for “No.” How about “Mic” and “sic.” Ignore commands and names that are too similar. Your dog may end up doing something they hear when all you want is their attention.

Spend a little time with the animal before you name him. He may demonstrate a trait that sparks a name. If your pup runs around in circles, consider Race. Dog breeds may have a look that suggests typical names (like Butch) but those names are almost always generic and popular.

Stay Away From Names With Negative Connotations

Stephen King’s “Cujo” was about a rabid Saint Bernard who killed people and terrorized a mother and her young son. You might find it amusing to use the name but it comes with demonizing baggage. Stay away from monikers like Lucifer and Beast too.

If you own more than one pooch, make each name unique. You don’t want to confuse your animals. The dog recognizes sounds, not enunciations. Going with Peter and Paul is kinda cool but stay away from soundalikes like Spot and Scott.

Stick With a Name

Adopting a shelter dog often entails a canine that already has a name, especially an older dog. It might be a good idea to stay with the original name. But if you change it, do so as soon as possible.

Here are the top 10 dog names for the gals, based on how popular they are, meaning, and which unique dog breeds they best apply to.

Hey, everybody loves Lucy. It’s not necessarily an uncommon name, but Lucy will be distinguishable for an ability to make you laugh. It’s great for a small dog like a Chihuahua or, better yet, go against the grain and give it to a Saint Bernard.

Luna is Latin for moon. A name for a thoughtful, intelligent pooch. Think Border Collie, Lab, or even Rottweiler. These smart dog breeds train easily, love to learn, and stare like they’re trying to climb in your head.

When you think “Stella,” don’t you see a tough, urban female? Stella stands with family no matter what. Among cute dog names, you want to brand the name Stella to companions with unflinching loyalty. We’re talking Great Pyrenees or Beagles.

Daisy belongs to a female that’s lovable, caring, and endearing. Label a Daisy because they’re friendly (Beagle) or affectionate (though it’d make for a great uncommon name for a tuff cookie like a Boxer).

Assertive and powerful, vulnerable and compassionate — that’s a lady. If your doggy’s loving and strong, she deserves a name that says it outright. Among the most feminine dog breeds with the name is the Yorkshire Terrier.

Uncommon cute dog names can be hard to find. But there’s Zoe. It means “alive” or “life.” The name hit the doggy Top 100 in 2000 and has been creeping up ever since. Variations include Zoé, Zoí, Zoee, Zoey, Zoie, and Zoë. The name is perfect for almost any breed.

Lily’s grown popular since the late 20th Century. The growth’s attributed to a trend in celebrities using the name. Lily evokes a sense of regalness and fits the bill for your Doberman Pinscher or Afghan Hound.

Lola is a variant of Dolores and means “Mary of the sorrows” or “lady of sorrows.” The name’s popular around the globe. It’s a cool name for droopy-faced dog breeds like Mastiffs and Shar Peis.

Molly rolls off the tongue. It has Latin and Irish origins, meaning “star of the sea.” It’s a fun name and belongs to a friendly pet that makes you giggle. We like it for pugs and Irish Terriers.

This is the name for tough dog breeds like the German Shepherd, yet it also works for the feisty Chihuahua. Max, of course, means the top or greatest and is short for Maximilian or Maxwell.

For uncommon, yet cool, male cute dog names, you won’t do better than Hurricane. It’s a name for big dog breeds, at best. Especially those whirlwinds you have a hard time keeping up with.

The most famous Smoky is a Yorkshire Terrier who became the first war therapy canine during WWII. Also spelled Smokey, the name stuck with black- or gray-haired dog breeds. Other names used with similarly colored canines include Ash, Jet, Carbon, and Batman(!).

From Beetle to Falter, the name Bailey’s been around a minute. One famous Bailey belonged to Elizabeth Warren, United States senator. A Golden Retriever, Bailey was a prominent presence in the senator’s presidential campaign, exhibiting great loyalty and charm.

Come out swinging like Marciano or Balboa with Rocky. It comes out of Rocco, which means “rest.” Rocky’s excellent for dog breeds known for their rugged demeanor. Muscular and powerful, it’s suitable for your Pitbull or Rottweiler.

Odin is as uncommon as dog names get. Odin was the god of poets, a great magician, and a principal figure in Norse mythology. Your Siberian Husky or Samoyed — who look and carry themselves with grace — is deserving of a name that reeks majesty.

Alfie comes from the Old English classic Alfred. One of England’s go-tos for canines, Alfie’s pretty uncommon here in the States. But that makes it all the more unique for your dog. The name’s good for poodle breeds, especially the Cockapoo or Maltipoo.

Though unisex, Bryce makes an excellent name for a male. Nicknames include Bry and Bry-Bry. A smart dog like the Bloodhound or the Staffordshire will get used to the differences quickly. But let them get used to the formal name first.

It’s believed dog lovers started naming canines a color based on coonhounds coming in two colors, blue or red. Traditionally, you want to stick to Irish Wolfhounds or Irish Setters, but Blue’s good for any dog.

Next Up: Dewclaws: Everything You Need to Know

Shih Tzu vs Maltese: What Are 8 Key Differences?

Rottweiler vs. Doberman: What Are 8 Key Differences?