Today, we will learn about different types of cottonmouth snakes. Cottonmouth snakes are venomous pit vipers that belong to the Viperidae family. They are also known as water moccasins and are semi-aquatic snakes, meaning that they dwell both on land and in water. In fact, they are one of the very few pit vipers on earth that are semi-aquatic. Cottonmouth snakes are native to the United States and usually dwell near slow-moving lakes and rivers. They are found from the southeast of the country all the way to the Midwest.

Although cottonmouth snakes are similar across the board, they are typically broken down by “territory” and have slightly different appearances and behaviors based on habitats. According to most, there are only two types of cottonmouth snakes at this time; the eastern (Florida) cottonmouth and the western cottonmouth. So, let’s learn about both!

Also known as Florida cottonmouths, eastern cottonmouths are venomous pit vipers indigenous to the southeast regions of the United States. They are typically near the Florida Peninsula and Georgia. They are highly distributed in Florida, including the upper Keys and extreme southeastern Georgia, but spread into other parts of Georgia, southeastern Virginia, and the Carolinas. Some say the Florida cottonmouth is distinct from the eastern cottonmouth. However, their territories blend as well as their characteristics.

The eastern cottonmouth is not entirely dependent on water and is often confused with harmless water snakes that it shares the land with. This snake has hemolytic venom and can sometimes be lethal to humans, with a 17% mortality rate. Let’s learn more about this interesting pit viper!

Eastern cottonmouth snakes are moderately large and thick snakes that usually average about 2-4 feet in length. However, rarely 6-foot specimens have been found. On their head, they have black cheek strips on each side. The inside of their mouth is nearly all white, hence the name “cottonmouth.” Their body is often olive or dark brown to black with 10-17 dark bands. These bands are often darker at the edges and lighter towards the center. Young cottonmouths are typically red, and they darken with age.

Eastern cottonmouth snakes are carnivorous and have a wide variety in their diet. They will eat anything from fish, amphibians, lizards, other snakes, turtles, birds, small mammals, and even baby alligators! Although, they will most likely be found eating fish since they hunt by and on the water.

As for their behavior, eastern cottonmouth snakes are misconstrued as aggressive snakes. However, they typically only strike when provoked or stepped on, so watch where you walk! When they defend themselves, they begin to coil up and open their mouths, displaying the white cotton-colored interior of their mouths.

Western cottonmouth snakes usually feed on freshwater fish. They can also eat other snakes, frogs, amphibians, small mammals, and birds because they are carnivorous. Their aggressive behavior is often greatly exaggerated. However, it is likely that they will strike if they are provoked or are stepped on. These snakes have heat sensors on their face and can track prey nearly fifty feet away. They will usually try to escape but often move in random directions when trying to flee. This may seem like they are trying to come at you rather than retreat away from you!

Western cottonmouth snakes are typically found in southern Missouri, Illinois, Indiana, Tennessee, and Central / Northern Texas. Like eastern cottonmouths, these snakes love to dwell near the water. They can typically be found in tall marshes or grass wetlands near lakes, streams, and ponds. As for their conservation status, western cottonmouths are also of least concern and are nowhere near becoming endangered currently.

Regardless of what area you are in, if you see a cottonmouth snake of any kind, they are all venomous! Therefore, please be sure when you are camping or hiking in the wild to be cautious of your surroundings. This will save you from a painful and potentially fatal bite from these very venomous pit vipers. 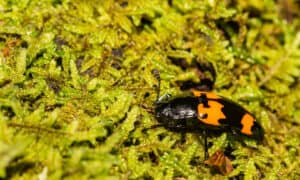