Discover the Largest Snake Ever Caught In Florida!

Florida is known to be the home of many scary and large snakes. But just how big is the largest snake ever caught in Florida? While many say that the largest snake ever found in Florida would be the eastern diamondback rattlesnake, this is incorrect. In more recent years, there has been a much larger and even more dangerous snake that has been found in the state. Let’s read more and find out!

What Is The Largest Snake Ever Found In Florida?

In 2020, snake catchers in the Florida Everglades caught an 18-foot-long Burmese python! While these snakes are native to Asia, there has been a recent growing population of Burmese pythons in Florida. In fact, the next largest Burmese python found in Florida was back in 2012, totaling 17 ft in length! So, what exactly is a Burmese python, and why is it in Florida? Let’s find out!

Burmese pythons are among the largest species of snakes in the world. They are non-venomous constrictors that belong to the Pythonidae family. These snakes are very well-known because they are massive in size and have very distinct scales and coloration. They are often bought as house pets, even though they are exceptionally large and extremely dangerous. In fact, it is because of the pet trade that these snakes are now considered an invasive species in Florida.

Burmese pythons are large, dark snakes with many brown spots bordered by black. They often have pale, almost golden scales outside of their brown spots. The length and weight of these snakes can range from 9 to 15 feet and 15 to 90 pounds, depending on the species. Rare as they may be, specimens up to 18 feet long and weighing more than 170 pounds have been discovered. A woman living at Serpent Safari had the largest Burmese python, which was 18 feet long and weighed more than 400 pounds!

Burmese pythons are carnivorous and live off birds and mammals. However, they are also known to eat amphibians and reptiles. Because they are so large, they can often be found eating foxes, rabbits, raccoons, goats, and even alligators sometimes! These predators sit and wait for their prey, lashing out and biting with their powerful jaws. Before attacking, they coil their long and heavy bodies around their prey, crushing it to death before devouring it.

Because of their digestion process, Burmese pythons typically only feed every month or two. However, they have been known to fast for nearly 18 months. The larger the snake, the larger the prey. Some Burmese pythons have been said to eat adult deer and much larger animals, thus declining populations of several different mammals in the area.

Burmese pythons are originally from Southeast Asia. However, they have now become an invasive species in Florida because of the pet trade. They are usually found in the Florida Everglades. They are excellent swimmers and require a large source of water, typically dwelling around marshes, woodlands, river valleys, and jungles. Between 1996 and 2006, more than 90,000 of these snakes were imported into the United States.

Although this may seem like the culprit for their invasion of the Everglades, it is not the main reason. They really overtook the area after hurricane Andrew in 1992, when a snake research facility was blown apart. This hurricane destroyed a python breeding facility, which caused several snakes to escape and populate in the Everglades. Since these snakes do not have natural predators, different prey has now seen a very large decline in the area.

Burmese Pythons are large and dangerous predators. Because they are bought as pets, attacks from them are common. Their bites can cause severe wounds because of their strong jaws and sharp teeth. These snakes have been known to eat other house pets such as cats and dogs. However, smaller specimens are not usually dangerous to humans or pets. Thankfully in Florida, there have been no human deaths caused by wild-living Burmese Pythons.

Although they are considered an invasive species of Florida, Burmese pythons are currently listed as a vulnerable species by the IUCN Red List. Since 2012, their wild population has decreased by 30%. Although once thought to be a result of the pet trade, it is mostly due to habitat loss and over-harvesting. This is because they rely on rainforests and jungles in Southeast Asia to survive. Thankfully in China, Thailand, Vietnam, and Indonesia, the Burmese Python is now listed as a protected species by the wild animals’ protection ordinance.

The Longest Biking Trail in Missouri 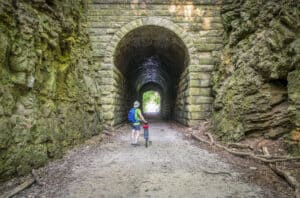 3 Massive Snakes Larger Than an Anaconda