Discover the Common House Bug That Looks Like a Scorpion

Written by Jeremiah Wright
Published: November 24, 2022
© Suede Chen/Shutterstock.com
Share this post on:
More Great Content:
What Kills Bed Bugs Instantly?
How To Get Rid of Roaches Overnight
Carpenter Ants vs Black Ants: What’s the…
Where Do Bees Go In The Winter?
The 10 Largest Grasshoppers In The World
Types of Beetles: The Complete List

Believe it or not, our world hosts many creatures that resemble the fearsome scorpion! One of them is a common house bug that has become infamous due to the misconception evolving around its name. Have you guessed what bug we’re talking about? Don’t worry; you’ll soon find out if you guessed right. But until then, let’s learn some facts about scorpions.

Scorpions are arachnids in the Scorpiones order that have been around for about 435 million years! They’re ferocious predators that possess a powerful venom that can paralyze and kill prey. They’re infamous for their grasping pincers and narrow tails. The smallest scorpion, the Typholchactas mitchelli, measures around 0.33 inches, while the largest, the Heterometrus swammerdami, can reach 9.1 inches long. Their bodies have a cephalothorax and an abdomen.

One unique scorpion characteristic is its exoskeleton, which glows under ultraviolet light, thanks to the fluorescent chemicals it contains.

Where Do Scorpions Live and When Do They Hunt?

These predatory arachnids are crepuscular or nocturnal when they primarily hunt, and they eat invertebrates. During the day, they rest in burrows or tree bark cracks. They are highly adaptable animals and can live in almost any habitat. Scorpions often prefer inhabiting deserts and semi-arid climates. However, they haven’t adapted yet to the Arctic climates.

How Do Scorpions Hunt?

Scorpions often ambush their prey or set traps. Their pincers are of great use in grabbing prey, crushing it, or injecting venom.

How Long Do Scorpions Live?

While scorpions typically live between 2 to 6 years, some have reached the incredible lifespan of 25 years! This highly depends on how large they are, where they live, and how well they’ve adapted to their habitat. Moreover, they have the unique ability to slow their metabolism, which helps them survive in harsh conditions when there’s no food source.

Scorpion stings are very common in tropical and subtropical regions. Of the 2,500 scorpion species, only 25 have venom strong enough to kill a human, including the Leiurus quinquestriatus. However, most scorpion stings will only cause pain and discomfort.

A study was conducted on the treatment provided to a 26-year-old woman stung twice by a specimen belonging to the species mentioned above, also called the yellow scorpion. Luckily, the woman fully recovered within two weeks after the bite. However, the patient sought medical attention quickly, which was of utmost importance for her recovery.

Scorpions served as prototypes for other bugs, which are widely recognized as scorpion imitators! Today, we’ll discuss only one of these creatures, another fearsome bug often found in people’s houses (and not only!).

Earwigs form the Dermaptera order of insects and are divided into approximately 2,000 species! They’re among the most feared house bugs due to the misconception that they get into people’s ears, cause deafness, or eat their brains.

Earwigs are considered scorpion look-alikes thanks to the forceps-like pincers on their abdomens, typically more curved in males. Like scorpions, which use their pincers to grab, hold, and kill prey, earwigs use their pincers to capture prey and defend themselves from predators.

However, they’re much smaller than scorpions, measuring 0.25 – 2 inches long on average, the largest extant species being the Titanolabis colossea, or the Australian giant earwig.

Where Do Earwigs Live?

Earwigs are abundant in the Americas and Eurasia, where they live in tight crevices in woodland. Some species can be found in fields and gardens.

How Do Earwigs Hunt?

Like scorpions, earwigs are primarily nocturnal animals. During the day, they rest in small, moist crevices. After sunset, they go out and hunt for insects and plants.

What Do Earwigs Eat?

No, they don’t eat human brains! Earwigs are omnivorous insects that feed on aphids, plant lice, snails, algae, decaying plant matter, lichens, and secretions produced by rats. The food passes through the foregut, midgut, and hindgut for digestion and comes out as “frass,” or poop. If you notice tiny black pellets on your plant’s leaves, you may have some earwigs around.

While adult earwigs have a “normal” omnivorous diet, baby earwigs eat each other’s poops, as they’re rich in nutritional value.

How Long Do Earwigs Live?

Unlike scorpions that can reach lifespans of about 25 years in the wild, earwigs live only around a year.

Do Earwigs Live In Your House?

Unfortunately, earwigs often come into people’s houses, especially when it’s raining. You can also find them in your garden if you have many plants. Since the eggs hatch during spring, earwigs are most often spotted during fall.

Since they’re tiny creatures, they can get inside your house through the smallest cracks.

Earwigs aren’t believed to carry any diseases or bacteria, so they’re generally considered safe for people and pets. Some earwigs may use their pincers to sting you if you try to touch them, but they aren’t strong enough to break through human skin.

Do Earwigs Get Into People’s Ears?

Yes, earwigs get into people’s ears, but not for the reason you’re thinking of! Since they prefer living in small, moist spaces, human ears look like the perfect home for them! However, earwigs neither lay eggs in the ears nor eat the human brain. The most they can do is cause ear pain and discomfort and, of course, a visit to the doctor if you can’t get rid of them at home.

This information is confirmed by scientific studies that have checked people’s tympanic membrane and external auditory canals for traumatism after taking earwigs out from their ears. The patients heard well and suffered no brain injuries.

Is It Good To Have Earwigs Around the House?

If you don’t mind their scorpion-like appearance, you can let earwigs roam around your garden, as they’re known to clean their habitats from dying plants and dead insects. They’re considered useful in controlling pest populations of mites and aphids.

Meet the Katydid: The Bug That Looks Like a Leaf 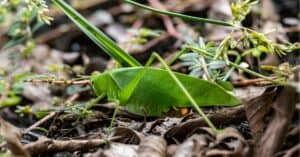