flickrfavorites / flickr
Share this post on:
More Great Content:
An Absolutely Gigantic Moose Makes These Grizzlies…
See The Footage of The Rarest Bear…
Silverback Gorillas vs Grizzly Bears: Who Would…
Why Did Cave Bears Go Extinct?
5 Massive Bears Larger Than a Grizzly
Watch a Grizzly Drag a Moose Calf…

Polar bears are not only the largest bears in the world, but they are also the largest carnivores on land! These magnificent creatures are admired for their beautiful white coats and their particularly adorable little cubs. Interestingly, a polar bear’s famous white fur has no white pigment. The outer layer of fur is called guard hair. In polar bears, the guard hairs are translucent and appear white because of how they reflect light. This is similar to how snow appears white despite having no pigment. What other surprising information is there on polar bears? We’ll find out in this article as we explore the world’s largest polar bear ever recorded!

Why are polar bears so large?

Polar bears inhabit the arctic circle including territories of Canada, Greenland, Norway, Russia, and the United States in parts of Alaska. The temperature in the Arctic circle is influenced primarily by the surrounding sea water which is 28.8-degrees Fahrenheit (-2-degrees Celsius) before it freezes. The average atmospheric temperature in the winter is between -22 and -31-degrees Fahrenheit (-30 to -35-degrees Celsius).

In the animal kingdom, different evolutionary trends relate body size to ecology. Bergmann’s Rule states that animal species in colder climates will be larger than related species in warmer climates. For example, a male polar bear (Ursus maritimus) typically weighs between 770 and 1,540 pounds. This is much larger than its southern cousin the Floridian black bear (Ursus americanus floridanus) which weighs 300 pounds on average. Size and climate are correlated because a larger, rounder animal has a lower surface area to volume ratio. With less exposed surface and a larger volume, there is less area available for heat to escape and more volume available to conserve heat. Heat conservation in the cold arctic environment is one reason why polar bears are so big.

Polar bears are also very large due to the amount of insulation they have. Polar bears have a thick, dense coat of underfur as well as an outer coat of guard hairs. Beneath their fur, these bears have a 4 inch (10 centimeter) thick layer of fatty tissue. This fat and fur insulate polar bears from the extremely cold temperatures the inhabit.

How do polar bears maintain their weight?

Polar bears primarily eat seals and do so typically by guarding a hole in the ice until a seal emerges. This is an effective hunting method because of their incredible sense of smell. Polar bears can smell a seal up to a mile away or beneath 3 feet of snow. They can smell a seal’s breath, locate it, and pull it out from below the ice. The skin and blubber of seals provides a high caloric diet that helps a polar bear maintain its weight.

A female polar bear’s weight fluctuates greatly throughout her lifetime. A mature female typically weighs between 330 and 550 pounds. Male polar bears are much larger and therefore exemplify sexual dimorphism- where the sexes have different physical traits. When a female is pregnant, however, she doubles in size and can weigh up to 1,100 pounds!

How do polar bears get around being so big?

Polar bears are classified as marine mammals because they spend a significant amount of time at sea. They have massive paws about 12-inches across that assist them in swimming. The large amount of fat insulating the polar bear also contributes to its ability to swim. The extra fat makes the bear more buoyant and allows for it to swim greater distances. Polar bears are incredible swimmers capable of swimming for days. The furthest a polar bear has ever been recorded swimming was a female in the Bering Sea. She swam for 9 consecutive days spanning 400 miles to reach distant ice.

Polar bears also travel extensively on land. Their big paws are helpful on snow and thin ice because they distribute their weight over a larger area, similar to snowshoes. Polar bears typically walk quite slowly, but they can run at speeds up to 25 miles per hour. While polar bears usually remain within a home range, the furthest recorded distance a polar bear has travelled in a single trip was a female trekking 2,980 miles.

What is the largest polar bear ever recorded?

The largest polar bear in the world was a whopping 2,209 pounds!

With the average man weighing 200 pounds, this bear was the size of 11 grown men! This polar bear was spotted in Kotzebue Sound, Alaska in 1960. It stood an impressive 11 feet 1 inch tall when on its hindlegs. In comparison, the average male polar bear typically stands 8 feet tall on its hindlegs. Unfortunately, this humungous bear was shot and mounted. Polar bear sightings in Kotzebue Sound are not incredibly common because it is a transitional climate zone. Polar bears are generally considered the largest bear species, although Kodiak bears can be very close in size.

How are polar bears doing today?

Polar bears are currently listed as a vulnerable species and are at severe risk due to habitat loss resulting from climate change. The ice that polar bears live on is melting at record speeds because of increasing global temperatures. Increases in temperature earlier in the year prevent polar bears from creating sufficient fat reserves necessary to survive a period of food scarcity. Melting ice also forces polar bears to swim longer distances which causes fatigue and drowning. Some scientists predict polar bears could become extinct by 2100.

12 Animals That Live and Travel in Packs 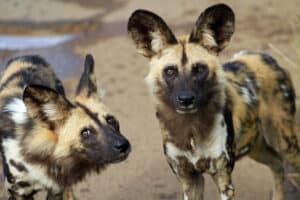