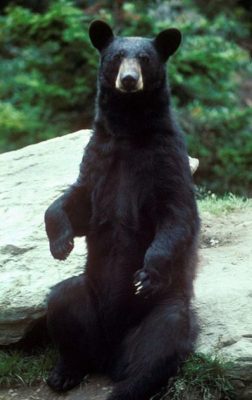 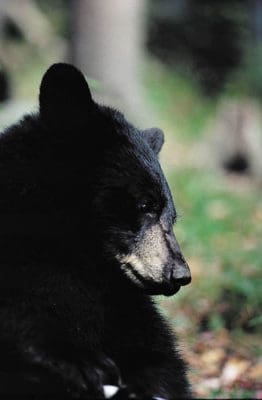 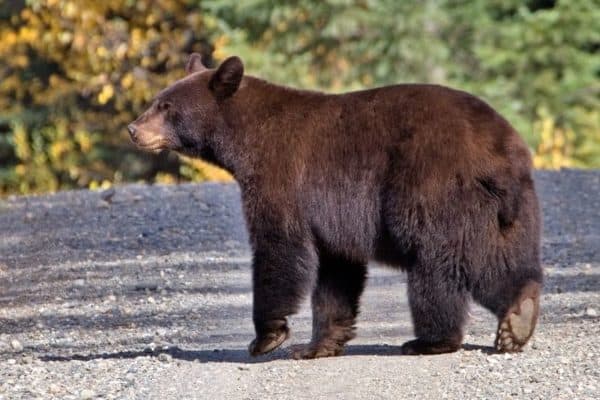 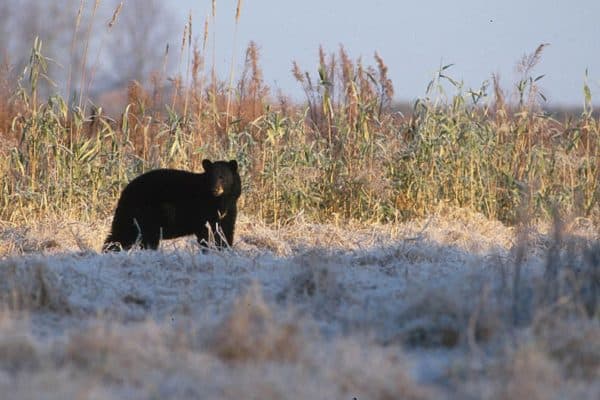 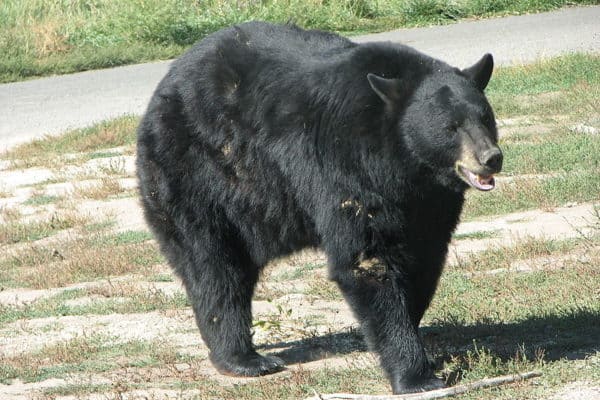 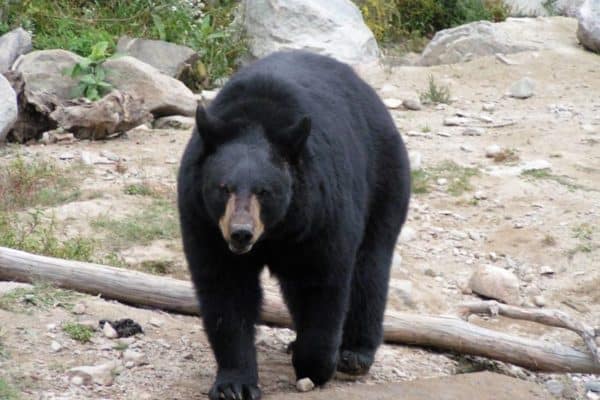 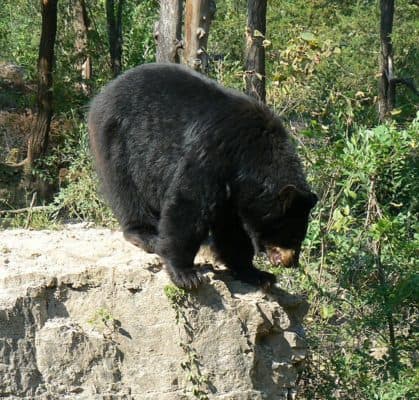 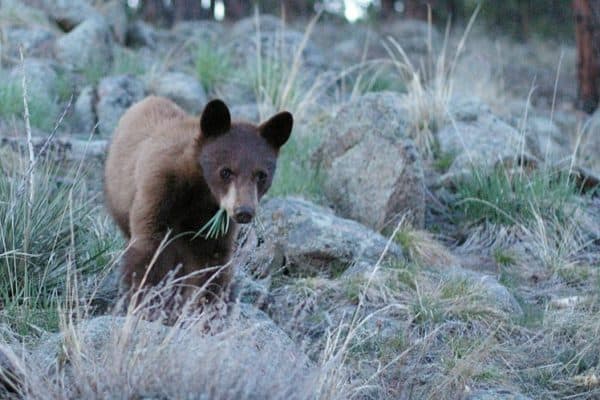 The Black Bear (also known as the American Black Bear) is a medium sized species of bear that is found inhabiting a variety of forested habitats across North America. The Black Bear is not only the most widespread bear on the North American continent but it is also the most numerous bear species in the world with there thought to be double the number of Black Bear individuals than all the other species put together. The Black Bear is also one of the only two out of the eight bear species that is not listed by the IUCN as being endangered as extensive conservation efforts added to their versatility has led to healthy populations throughout much of their remaining natural range (providing that there is a good source of food). There are sixteen recognised sub-species of Black Bear found across North America today, which vary mainly in their size and fur colour along with the region in which they live.

Despite their name, Black Bears can range in colour from black to dark red or brown and can even be a lighter tan in certain areas. They have short thick fur covering their heavily built body and have a pointed muzzle, small eyes and larger and more pointed ears than their Brown Bear relatives. Along with being a great deal smaller, there are a number of other notable differences between the two species including the Black Bear lacking the distinctive shoulder hump of their larger cousins. They also have shorter legs and claws which makes the Black Bear a much more agile climber than the Brown Bear so in areas where the two exist in the same place, Black Bears are able to escape danger by digging their claws into the tree trunk and pulling themselves up. Like all bear species though, the Black Bear has an excellent sense of smell which is used to detect food and less developed hearing and sight, due to their relatively small ears and eyes.

Although the Black Bear is still widespread throughout much of North America today, their historical range once covered the entire continent where they would have been found in every inhabitable patch of forest. Today they are found from northern Canada, throughout western and parts of eastern USA, and down into northern Mexico. Providing there is a forest habitat of some description these incredibly adaptable animals will try their best to survive successfully there and they are actually found in a number of very diverse regions. Black Bears are known to inhabit the hot and dry, shrubby forests of Mexico and the steamy, hardwood swamps of the south-eastern USA, right up to the coniferous forests of Canada and Alaska and the barren treeless tundra even further north. Despite local populations in some areas being affected by loss of their natural habitats, the resilience of the Black Bear means that populations in most areas are actually increasing.

The Black Bear is a largely solitary and nocturnal hunter, that may occasionally tolerate the presence of other individuals when a number gather around an ample food source. Black Bears spend the majority of their waking life searching for food in the surrounding forest and must eat vast quantities of plant matter every day to ensure that they build up a decent fat reserve for the coming winter. When the hostile winter conditions set in, Black Bears retreat into a den under a hollow tree or in a burrow, where they semi-hibernate through the cold months ahead. Although this is not true hibernation as their body temperature only drops minimally, it means that they are able to wake up and venture out in search of a light snack to break up their long slumber. In hotter regions in the south Black Bears may not bother denning over the winter at all (with the exception of pregnant females), but in the most northerly parts of their range they may not emerge until 8 months later.

Male and female Black Bears will briefly come together to mate in the summer, after which time they will become solitary once again and both will begin to start feasting to prepare for winter. After a gestation period that lasts for around 7 months (although this includes an almost 5 month long period of delayed implantation), the female Black Bear gives birth to between one and five cubs at the end of winter in her den. The hairless cubs are incredibly vulnerable and rely on the warmth created in the den from their mother’s body heat to help them to survive the early days. Black Bear cubs remain with their mother until they are nearly two years old, learning the skills that they need to survive on their own, and will even share her winter den over their first winter. After around a year and a half, the female Black Bear will again be looking to mate and cubs are often eventually scared away from her by increasingly aggressive, mature males.

Despite being technically classed as a carnivore, the Black Bear has a diet that is mainly comprised of plant material. Between 75% and 95% of their diet is vegetarian (depending on the food available in different locations) and it is also greatly varied. Black Bears forage for fruits and nuts in the trees which they pluck off the branches using their prehensile lips, along with eating grasses, roots and bulbs on the ground and supplementing their diet with small animals like insects and rodents. Depending on the region and therefore the prey available, Black Bears are also known to hunt young Deer, eat carrion and can also master the art of catching fish in rivers (a skill that is particularly used in areas where they are no Grizzly Bears to compete for food). Due to their large body size though, Black Bears must spend the vast majority of the night eating and will spend an average of 12 hours a day trying to build up its fat reserves for winter.

Due to the relatively large size of the Black Bear, fully grown adults have few natural predators within their native habitats with the exception of Grizzly Bears in some areas. However, the Black Bear has evolved to have shorter claws and legs than their enormous and aggressive cousins, making them far more adept at climbing trees and giving them a good chance of escape. Young cubs however, are much more vulnerable and are threatened by a variety of different predators including Foxes, Birds of Prey and even other Black Bears. Although Black Bears and Humans do tend to have a relatively peaceful relationship, they are often persecuted by farmers who fear for their livestock in areas where growing Human settlements are encroaching on their natural territories. A number of isolated populations are also threatened by loss of their habitats mainly due to deforestation for logging.

Bears differ from other carnivores as the special molar teeth that they possess have not specially adapted to shearing meat, but to instead grind down vegetation. However, for such a large animal to sustain itself successfully on a predominantly vegetarian diet the Black Bear must spend an enormous amount of time eating and is known to consume tens of thousands of nuts and berries in a day. As they spend around half of the day foraging for and eating food, the average Black Bear consumes a nut or berry every second of this time. Although Black Bears normally move around slowly on all fours on the flat soles of their feet, they are not only able to run at speeds of up to 30mph but when they feel threatened, Black Bears will stand up on their hind legs to make themselves look even bigger in an attempt to intimidate a predator or rival, which leads to aggressive fighting if neither side backs down.

Black Bears would have once roamed throughout every forested area on the North American continent but although they are still widespread today, the hunting of them by people and the loss of their natural habitat in some areas has led to declines in population numbers. However, these incredibly versatile and adaptable animals have managed to continue surviving successfully and their placid nature has led to them not being scared of people, they have adapted to living close to growing settlements and have been known to raid cars and outbuildings in search of food. Black Bears are also common in a number of national parks with raids on camp-sites by Black Bears sometimes causing problems when food is left in or around tents. Although the shooting of Black Bears is legal in many states, it is said to be so well-regulated that populations throughout much of their natural range appear to actually be increasing.

Today, the Black Bear is listed by the IUCN as an animal that is of Least Concern of becoming extinct in its natural environment in the near future. Although a few remote populations are threatened by increasing levels of both hunting and habitat loss, Black Bears remain common and widespread throughout much of North America’s forest. The regulation of Black Bears is also well-managed and although between 40,000 and 50,000 individuals are killed every year (depleting up to 20% of the population in some areas), the general population trend is increasing.

View all 11 animals that start with N

How to say North American Black Bear in ...