You’re standing in a river when something long and slimy slithers across your leg. At a glance, you think it’s an eel. But then you start wondering, could it be a snake?

The key difference between an eel vs snake includes their classification, size, identification, habitat, and reproductive cycles. Both eels and snakes have long sinuous bodies. However, snakes belong to the reptilia class since their reptiles. Eels belong to the order Anguilliformes because they’re a type of ray-finned fish.

Both worm-like animals can reach incredible sizes. Some eels grow past 10 ft in length, and snakes can weigh over 300 lb! The exact size of a snake or an eel depends on their species and environment.

How can you tell eels apart from snakes? There are a few different identifying features. Most eels are completely scaleless, while snakes are covered in scales. Eels also have fins that snakes don’t need.

Identification can be a little bit trickier when it comes to habitat. There are aquatic snakes that live in the water, just like eels! However, there are also terrestrial, land-living snakes. In case you were wondering, there aren’t any eels that live on the land. But they can survive out of water for a few hours.

What other differences should you know about? Keep reading as we unveil the key differences between an eel vs snake.

Eels are ray-finned fish belonging to the order Anguilliformes. There are hundreds of different eel species. One of the most popular ones is the American eel. Other names that it goes by are the common eel and freshwater eel. Scientifically, they’re classified as Anguilla rostrata and have a native origin.

Snakes are reptiles belonging to the reptilia class. They form part of the order Squamata, which includes about 10,900 closely related reptile species. There are about 3,900 snake species, comprising the sub-order Serpentes. These animals are characterized by scaly skin to protect them from dry environments.

Adult eels can reach up to 6 ft in size. However, 2 to 3 ft is a more average length. Males are smaller than females. Male eels usually don’t grow past two feet in length. Most eels over 16 inches in length are females. Most eels less than 16 in length are males.

Giant moray eels can reach 13 ft in length and weigh over 55 lb. The heaviest eel species, though, is the European Conger Eel. It can be as long as 10 feet and weigh around 200 lb!

Eels don’t have any scales. They do have true jaws, pectoral fins, and thick skin. The outer layer of their skin has a heavy slime covering.

Typical coloration for an American eel includes olive to green and brown on the back. They usually have yellow-green colors on their sides and have a grey-white belly. Once they’re sexually mature, an adult eel will leave the fresh water to go to the ocean and spawn. After spawning, they transform into silver eels. Silver eels have a black top and silver bottom.

Snakes are entirely covered in scales. Unlike fish scales that attach to the skin, snake scales are a part of the skin. The shape and arrangement of the scales are usually consistent within a given snake species. That’s why scales can be one of the easiest ways to identify a snake. Humans and primates even have a special ability to detect motionless snakes just by noticing the presence of scales.

Different areas of the snake’s body have different types of scales. The dorsal scale rows on their mid-body help the most with identification. The dorsal scales can either be smooth or granular.

You can find eels in saltwater and freshwater. The majority of eels live in the sea. Some eel species can be found living in the deep waters on the Continental Shelf. Other eels will be found in the ocean’s shallow waters, burrowing into the sandy bottoms. They love living around rocks, too, where they can hide in the different crevices.

Many eels are catadromous, which means they spend most of their adult lives in freshwater streams and rivers. When they’re ready to spawn, they return to the oceans where they were born.

A snake’s habitat varies greatly depending on its species. There are aquatic snakes that live most of their lives underwater. Aquatic snakes inhabit estuaries, rivers, and coastal waters. You can find them throughout Southeast Asia, Papua New Guinea, Northern Australia, and Indonesia. Land-dwelling terrestrial snakes live in forests, mountains, deserts, and man-made habitats.

Terrestrial snakes spend life on land. They’re experts at camouflaging with their environments. Take, for instance, the gaboon viper, Bitis gabonica. Their body markings make it easy for them to stay perfectly camouflaged while resting among dead leaves.

How some species of eels reproduce remains a mystery. We know that eels begin their life as larvae, also called leptocephali. The tiny eel larva drifts along the surface waters of the sea. They transform into glass eels and eventually become elvers before seeking their juvenile and adult habitats.

Eels will remain in the sea for most of their lives. Freshwater eels travel upstream to freshwater habitats. When a freshwater eel reaches sexual maturity, it’ll return to the ocean to spawn and die.

We know how snakes reproduce in great detail. Their breeding cycles vary depending on the species.

For snakes, the onset of mating is likely caused by rising temperatures. Snakes that live in cool climates usually have annual or biennial reproductive patterns. They’ll meet in the spring or early summer and produce their eggs by the end of the summer.

Given the opportunity, female snakes will usually mate every single year. However, they do have a backup plan. Female snakes can store sperm from a previous mating, called amphigonia retardata. Certain turtle species have the same impressive ability.

What is the Best Month for Mushroom Hunting? 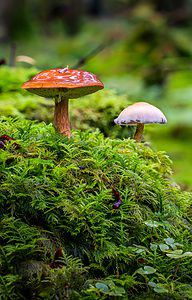