Downy woodpeckers are most common in the backyards of North America. These little visitors love suet cakes, peanuts, and sunflower seeds and are often seen clinging on dead trees.  But fun fact is they have a look-a-like cousin which one might mistake them for. That’s right, the Hairy Woodpecker! For a first-time birdwatcher, the differences between the two are quite challenging to tell because both have the characteristics of a woodpecker, such as sharp and thin bills and tiny size. Still, there are certain distinctions between them. So, what are the differences between the Hairy Woodpecker vs Downy Woodpecker? Below, we will take a closer look at each of these tiny creatures’ bill, head and body, size, tail, and habitat.

In spite of their remarkable commonalities, the main differences between Hairy Woodpeckers (Picoides villosus) and Downy Woodpeckers (Picoides pubescens) include their bills, head and body, size, tail, and their habitat. However, these two birds’ differences do not only encompass their body appearances but also their behavior and voices. For instance, downy woodpeckers are curious and bold, while hairy woodpeckers are shy and will more likely fly away. But through their physical features, we’ll be able to point out which is which.

Hairy Woodpeckers have larger bills than Downy Woodpeckers. Bird watchers or birdies know how to determine birds by being keen on their most common features. Upon scrutiny, one can say that these two species obviously differ in bill lengths. The downy woodpecker’s bill is short and dainty, about half to one-third distant from the base of the bill to the back of the head. Also, some cases may appear even smaller if the nasal bristles are fluffed.  On the other hand, the hairy woodpecker’s bill has the same length as its head, proportionally thick, stouter, and most of the time dagger-like or chiseled-sharp in appearance.

The bill size difference has its own advantage: Hairy, with its larger bill, allows it to drill deeper. Downy, with its shorter bill, makes it lighter and allows it to balance on easily breakable branches.

While both have comma-shaped black marks extending from the shoulder onto the breast, Hairy Woodpeckers have it well-developed, hence more obvious than Downy Woodpeckers. Although these markings are not very prominent and can vary through several factors, they can still ease the identification through this feature.

Aside from the bill, the easiest and most obvious way to determine their identities is by their sizes. A Downy Woodpecker is usually smaller than a Hairy Woodpecker. It has an average length of 6 to 7 inches. Meanwhile, Hairy Woodpeckers are usually varying from 9 up to 11 inches and almost similar to the size of a Robin. Judging a bird’s size can somehow be difficult, especially on the open field. Given their bill size and height, Hairy Woodpecker is heavier compared to its cousin. The former is 40-95 grams while the latter is 21-28 grams.

We cannot deny that both woodpeckers have identical plumage. However, another subtle difference that can serve as a key identification factor is their tails. Hairy Woodpeckers have pure white outer tail feathers, while Downy Woodpeckers have whitetail feathers with black barring which seems to be spotted.  Then again, given the aforementioned details, these characteristics differ depending on geographical variations.  For instance, some Downy Woodpeckers in hot areas of North America do not have the black spots on their tails. Meanwhile, some can only be visible on matured ones. Another one is that spots can appear very bright during winter or cold seasons.

Both birds can be found in pine and/or hardwood forests of Northern America. Although woodpeckers are not a frequent backyard visitor, Downy woodpeckers are most likely to appear in suburban to urbanized and agricultural areas. The said woodpeckers love to settle on younger trees or even cattails and are often seen feeding on weed stalks. Downy Woodpeckers are frequently spotted mixed with other traveling birds alike in sizes such as titmice and chickadees. They are also more curious than their counterparts and most likely to respond to chirping and pishing of birdwatchers. Meanwhile, Hairy Woodpeckers are often seen in woody forested areas due to their behavior. They are more timid and solitary, with more tendency to fly away when disturbed unlike their counterparts.

Honestly, it will probably take some time to spot which is which as these two are both black and white and red all over but now that we have reviewed their unique features, setting them apart is not as confusing as we thought!

Meet The 10 Cutest Turtles In The World 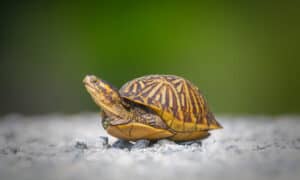