How Do Whales Sleep Underwater?

Something tells me that the question, “How do whales sleep underwater?” doesn’t invade your thoughts a lot. But once you think about it, you really want to know! After all, as marine mammals whales still need to surface to gulp breaths of air, which seems difficult during a long siesta!

Let’s dive into how whales sleep!

How Do Whales Sleep?

Among cetaceans (a group that includes dolphins and porpoises), whales are the behemoth. They’re also mammals and they have lungs that need oxygen so whales need to breach the surface of the water to be able to breathe.

The blue whale, the largest animal in the world, can weigh up to 440,000 lbs. So how can something so large that needs air in its lungs sleep without drowning?

Here are two of the ways whales sleep underwater:

Its important to note that whales sleep differently than most mammals on land. While many land mammals have developed adaptations that allow them to sleep standing up, whales have an adaptation that allow them to rest while still breathing — which can be every 3 to 15 minutes depending on whale species.

How Do Whales’ Brains and Bodies Work While They’re Sleeping?

It’s easy to think there’s only one way to sleep — the way humans do, but that’s not the case with every creature.

As was mentioned, one of the ways whales sleep is on or near the surface of the water. It’s a behavior called “Logging” since they’re so still they might be mistaken for one.

Another way they sleep that has been recorded is to hang suspended upside-down without moving or breathing. A humans’ breathing is unconscious. A whales’ isn’t. Cetaceans need to consciously know when to breathe since they need oxygen as well as water.

They also use only half their brains to sleep and half to stay awake at once. Talk about compartmentalizing. Whales often close just one eye. The reasons could be because they need to stay alert for predators and also because they can’t lose too much body temperature which sleeping obviously affects.

The length of time they sleep varies depending on the species. Scientists have discovered that some nap in increments of 10-15 minutes. (Cat-napping?) But humpback whales have been found sleeping on the surface for up to ½ hour.

Did you know calves (baby whales) can actually sink if not for one thing: their mother! Whales moms don’t stop swimming for several weeks of a calf’s life. If she does, her baby could sink since they don’t have the blubber/fat needed to float.

While the mother swims, her calf rests, eats, and sleeps in her slipstream. It’s called echelon swimming. It’s kind of like driving behind a semi on the interstate. The aerodynamics are such that it sort of creates a suction that pulls you along.

The young one can’t swim long distances yet so their mother is right along with them teaching them and helping them build up their strength and fat reserves. Remember, if a calf is weak from swimming too much, they can endanger themselves and the pod since predators could be alerted.

There are stunningly remarkable photographs of whales sleeping. In 2017, photographer Franco Banfi snapped a picture of a pod of sleeping sperm whales when he was free diving (having no breathing apparatus). They were motionless and laying vertically toward the surface. It would be hard to believe if there wasn’t photographic proof of it.

Banfi was diving off the coast of Dominica when he suddenly found himself in the middle of the sleeping giants. They were drifting about 65 ft. below the surface.

“Other whales joined the group from below us and we found ourselves among them. The calves were in the middle of the group for protection and suddenly they all stopped swimming and started to sleep vertically in the water.”

It wasn’t the first time the behavior has been seen though. In 2008, researchers published a study that told of this bizarre sleeping habit that had been seen in the wild. They also reported that the whales didn’t breathe or move as they slept.

How whales sleep underwater still needs a lot more study and is far from being exhaustive. Phrases like, “A common assumption…” and “It is not clear whether…” and “…still a matter of discussion” kept popping up as I researched.

There’s just not a lot of information available about the subject!

We may never know the sleeping behavior of every species of whale, but maybe it’s not so earth-shattering that we don’t understand everything that happens in the vast world of the ocean. I think the whales have everything under control.

How Do Whales Sleep Underwater? 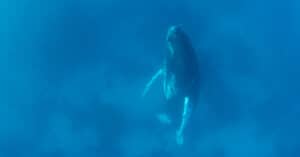