Written by Hannah Ward
Published: December 28, 2021
Share this post on:
More Great Content:
What’s a Baby Kangaroo Called & 5…
Jacked Kangaroo: Just How Strong Are Buff…
Pet Kangaroos: Is It Legal & Is…
Kangaroo Paws, Hands &Claws: Everything You've Ever…
Is A Kangaroo A Mammal, Marsupial Or…
Are Kangaroos Dangerous?

Kangaroos are one of the most iconic Australian animals.  There are four species of kangaroo which live in Australia and New Guinea.  While they are well-known for the way that females carry their tiny joeys in a pouch, they are also famed for their bounding gait.  Kangaroos have a unique way of moving and they can jump great distances with a single leap.  But how far can they jump?  Join us as we discover how high and how far a kangaroo can really jump.

How Kangaroos Manage to Jump so Far

Kangaroos are one of only a few animals that move around by hopping.  They have a bounding gate which allows them to jump great heights and incredible distances with a single leap.  But how do they do it?  Well, the secret is in their unique structure.

Kangaroos are perfectly evolved to their method of movement.  They are from the family group Macropodidae and are commonly known as macropods.  The term macropod is derived from the Greek for “large foot”.  This is particularly accurate as kangaroos have strong and well developed hind legs and extremely large back feet.  Their back feet are extremely powerful and provide kangaroos with the momentum to jump.  As well as large back feet, kangaroos have a long, muscular tail which provides them with balance.  Their unique style of movement is actually one of the fastest and most effective methods of covering long distances. Hopping enables kangaroos to travel efficiently without much effort.

The key to a kangaroos gait is the Achilles tendons that run down the back of their hind legs.  In basic terms, a kangaroos legs act like a spring.  Kangaroos use both hind legs together, rather than placing one foot in front of the other.  In the first instance of a hop, their hind legs and their toes are compressed underneath them and towards their body.  When this happens their tendons are stretched (imagine a rubber band being pulled). The stretched tendons and ligaments provide energy – known as elastic potential energy – and their muscles contract, pulling the bottom of their legs downwards.  This downwards action, along with their toes moving away from their body, creates a spring effect (imagine the rubber band being released).  This spring effect means that kangaroos can use their tendons to jump incredibly effectively.

How High and how Far do Kangaroos Jump?

So, now that we know how kangaroos jump, just how high and how far can they actually go?  We’ve already talked about how kangaroos use their back legs for momentum, and that momentum is really important when it comes to jumping.  When kangaroos are bounding along they have more momentum when they’ve built up some speed.  Just like when someone is doing athletics (ie the long jump), their more powerful jumps come when they’ve built up plenty of speed, or momentum.  When we think back to how kangaroos utilize their tendons to create a “spring effect” when jumping, we can understand just how movement helps them to create more momentum.

How far and how high a kangaroo can jump really depends on the size of the animal. Red kangaroos are the biggest species of kangaroo and the largest marsupial in the world.  Being the biggest, they naturally have the biggest jump.  Red kangaroos can reach speeds of around 40 mph. This super speed gives them incredible momentum to get in some really big bounds.  The average jump of a red kangaroo is 25 to 30 feet. However, the farthest recorded leap was made by a female red kangaroo in New South Wales in 1951. Incredibly, she managed to cover a massive 42 feet in a single leap.  These jumps all have plenty of speed and momentum built up.  By comparison, from a standing jump, kangaroos can only jump forward around 6 feet 6 inches.

The same principle applies when it comes to how high a kangaroo can jump.  Red kangaroos can jump around 10 feet high when they have plenty of momentum behind them.  However, from standing they can only jump between 4 and 6 feet in the air.

Speed is essential for a kangaroo to be able to get in those really big leaps, but in turn jumping actually allows kangaroos to reach some pretty incredible speeds.  This is because when kangaroos increase their speed they actually do so by increasing the length of each hop.  This is completely different to most other animals who usually increase the frequency of their stride rather than the length of it.

We’ve already mentioned that hopping is a really efficient method of movement for kangaroos. However, the truth is it’s actually super efficient.  Most of the energy that a kangaroo needs to move is generated by it’s super springy tendons – around 70% of the energy required actually.  This means that they only need to put a little bit of effort into each jump, despite how far and how fast they can travel with each one.  In turn, this means that they can travel long distances without getting worn out.  By comparison, animals such as dingoes (which are predators of kangaroos) can use twice as much energy over the same distance.

Although kangaroos move both hind legs together when they jump, rather than independently, they can still turn incredibly quickly.  This is because they have the ability to pivot on one foot, meaning that they can turn almost 180 degrees in a single hop.  This is also helped by their centre of gravity which is in their pelvis, and the fact that – unlike many other animals – they don’t have long bodies which limits their turn.

All of the above advantages of using hopping as a means of locomotion leads to one big advantage – their ability to outrun predators.  The ability to cover long distances very fast without using much energy, and turn quickly means that kangaroos definitely have the advantage over predators such as dingoes, wild dogs, and foxes. 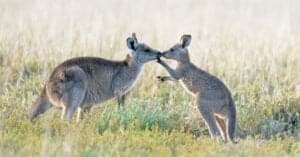