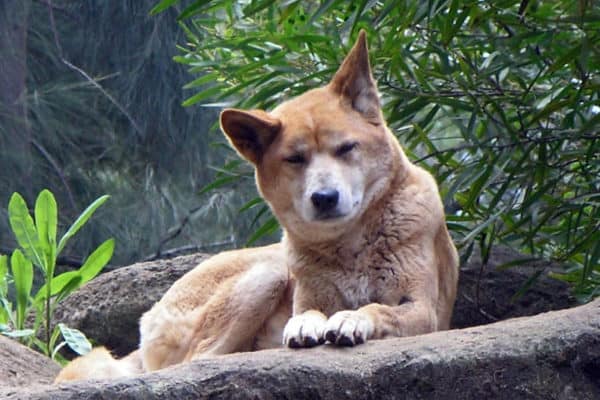 The dingo is the only canine species native to Australia.

Doting parents but fierce predators, dingoes are well-adapted for the harsh and diverse climates of Australia and the Pacific region. These creatures are considered to be a wild type of dog and exhibit similar pack behavior and hunting strategies as the closely related wolf. They can be distinguished from similar canines by their almost fiery red coat color.

The scientific name of the dingo is Canis lupus dingo. Lupus, as many people already know, is the Latin word for wolf, while the name dingo was taken from the local Dharug language of the indigenous Australians located around the Sydney area. However, the taxonomical classification of the dingo is the subject of fierce debate. The animal is currently classified as a subspecies of the gray wolf, but some taxonomists believe that there are enough physical and genetic differences to classify it as an entirely separate species altogether. Either way, the dingo is part of the genus Canis, which also makes it closely related to the coyote, the African golden wolf, and the Ethiopian wolf. It is more distantly related to foxes.

The oldest dingo fossil ever unearthed is some 3,500 years old, but studies suggest that the subspecies likely arrived in Australia well before then. The dominant view is that the dingoes were brought over by humans after the domestication of dogs, which would arguably make them the first of many placental mammals to be deliberately introduced into Australia. However, not all experts agree with this view. The alternate view is that the dingoes may have migrated on their own thousands of years earlier when the sea levels between the island and the continent were much lower.

With its lean appearance, pointed ears, short fur, bushy tail, and long snout, the dingo animal resembles a medium-sized dog in most of its prominent characteristics. The animal measures around four feet between the head and the body, while the tail adds another foot to its length. It is anywhere between 22 and 33 pounds in weight. The coat color may range between tan, red, or yellow. Individuals tend to have a white coloration along their bellies and inner legs, but black patterns have also been identified in the wild.

The dingo is quite similar to the wolf in its highly diverse and intricate social arrangement. While young males tend to be solitary creatures, the most common social arrangement consists of packs of up to 10 individuals at a time. The pack typically contains the main mating pair, the offspring, some extended family, and perhaps the offspring from the previous year. Males tend to be dominant over female members, and higher-ranked members will attempt to establish dominance over lower-ranked members of the pack and guard their rank fiercely. The pack offers protection and security to each of its members, regardless of rank. Together the members will cooperate with each other to gather food, protect the young, and survive in the wild.

Dingo communication consists of various forms of barking, howling and growling. Their barking is very distinct from a dog bark and makes up only a small fraction of their verbal repertoire. Their growling is intended to ward off potential dangers and threats, and it is also used as a means of enforcing dominance over other members of the pack. In addition, they have several distinct forms of howling, which can vary in sound and intensity based on the season and the time of day, although it is not entirely clear why they howl. Like other canines, dingoes also have a superb sense of smell. They have been known to mark their scents on various objects or places to convey information to other individuals.

Dingoes do not usually travel far from the initial place of their birth. They will live, hunt, and rear their family within a narrow territory of only a few miles at a time. Dingoes are also nocturnal creatures; they spend most of their waking hours at night with peak activity around dusk and dawn. Dingoes have short periods of activity followed by longer periods of rest.

The dingo animal is located extensively across the Australian landmass, except for certain parts of the southeast and the island of Tasmania. Some populations are also found in southeast Asia and the Pacific, including the countries of Thailand, Laos, Malaysia, Indonesia, Borneo, the Philippines, and New Guinea. Favored habitats include forests, plains, mountains, and certain deserts that contain water holes. They tend to make homes out of caves, logs, or holes.

Dingoes are best described as opportunistic nocturnal carnivores. They will feed on any number of small animals, depending on the availability of local wildlife at the time. These may include rabbits, rodents, birds, reptiles, fish, crabs, amphibians, insects, and even some types of seeds and fruits. The remainder of the diet consists of larger animals, including wallabies, kangaroos, sheep, cattle, and possums. If given the opportunity, they are also known to scavenge from the leftover remnants of human garbage and refuse.

Although speed and stamina are the dingoes’ main assets as a hunter, they will also need to coordinate in packs to take down the largest prey, which can be a dangerous affair for individuals. Their tactics usually involve chasing the prey toward the other pack members or exhausting the prey through sheer stamina. They will also sometimes harass sick or injured animals that have wandered far from their herds or groups. The dingo will typically kill prey by biting into the neck and severing the throat and blood vessels. They have been known to nip at the ankles and heels to slow prey as well.

As an apex predator in the Australian ecosystem, an adult dingo has few other natural predators, especially when it protected by the entire pack. However, large predators such as crocodiles, jackals, and birds of prey may still kill the youngest and most unprotected dingoes when they are vulnerable to predation. Dingoes have also been known to die from snake bites and buffalo or cattle attacks.

Humans represent a bigger threat to the ongoing existence of the dingo. Much like the wolves in North America and Europe, dingoes are considered to be pests by some farmers because they will attack and kill domesticated animals. Several dingo control measures have been implemented to prevent the further destruction of livestock, including a large fence erected around the main sheep-holding territories in southeast Australia. If a dingo wanders into that area, then it may be killed for a bounty. Poisoning is another potential method of deterring dingo attacks. Fortunately, since dingoes occupy nearly the entire Australian region (even the places largely inhospitable for human settlements), most populations are rarely threatened by human activity.

Another potential source of danger also comes from an unexpected corner. Dingoes have been known to breed and hybridize with domesticated dogs. This is slowly eliminating the genetic diversity of the dingo population. It is believed that large populations of dingoes now consist of hybrids (particularly near large human settlements), and even the wild populations have small elements of genetic hybridization within them. Experts are debating the implications of this loss and how to reverse it. Some biologists say that it is the result of unavoidable genetic change and cannot be reversed at all.

Dingoes have a strict and regimental mating system. They tend to breed only once every year at around the same time. After a gestation period of about two months, the female will produce a litter of about five pups on average, but potentially up to 10 at a time. The pups take around two months to fully wean. After this time, they are taught important skills such as hunting and communication that are integral to their survival. The pups will achieve full independence several months later. However, instead of going off on their own, the pups may stick around and helps their parents rear the subsequent litter of young.

Dingoes achieve sexual maturity about two years into their lives. This is when they typically wander off on their own and live a solitary existence. Once a male and female are paired together, they will typically mate with each other for life and form a new pack. The dingoes can live up to 10 years in the wild and potentially up to 13 or 14 years in captivity.

Dingo population numbers are difficult to estimate, but it is believed that pure dingo populations are decreasing, possibly due to interbreeding with local dogs. The International Union for the Conservation of Nature (IUCN) Red List, which keeps track of the endangered status for various species, had previously listed them as potentially vulnerable, but it later removed the dingoes from the list due to the difficulty of defining them. It considered them to be a feral dog.

The dingo is currently protected within vast swathes of national parks and reserves. They have little legal protection outside of these areas, but several organizations are dedicated to the protection of the pure dingo lines.

What is a dingo?

A dingo is a type of canine native to Australia. It is a subspecies of the gray wolf, which makes it closely related to (and capable of interbreeding with) the domesticated dog.

What is the difference between a dingo and a dog?

There are several differences between dingoes and dogs, including their appearance, their vocalizations and sounds, their mating and social behavior, and their affinity toward humans. It is debated whether dingoes are most similar to wolves, which do not respond to human cues, or domesticated dogs, which can respond to human cues. Due to their similarities, however, some experts have classified them as feral dogs.

What do dingos eat - are they carnivores, herbivores, or omnivores?

How dangerous is a dingo to humans?

Dingoes will generally seek to avoid interactions with humans. Although dingoes will sometimes appear near human populations, their extensive range means that they inhabit areas not normally occupied or traversed by people. Dingo attacks are rarely known to occur, and only a few documented fatalities have been reported. But because of their wild nature, it is a good idea to avoid direct contact with them.Dog-dingo hybrids tend to be more common in large human populations areas, particularly in the southeastern part of Australia. They can sometimes be seen in urban and suburban areas at night. However, it is a good idea to avoid contact with hybrid individuals or packs as well.

Can dingoes be tamed to be good pets?

As they are considered to be wild or feral animals, dingoes would not make a good pet. They do not have the instinctual desire for human companionship that has been instilled in dogs through thousands of years of evolution. Because of their wild nature, ownership of a dingo is currently illegal in Australia.

Where do dingoes live?

Dingoes live almost exclusively in Australia and some parts of southeast Asia and the surrounding Pacific islands.