Written by Kyle Glatz
Published: February 26, 2022
© kyslynskahal/Shutterstock.com
Share this post on:
More Great Content:
Leopard vs Jaguar - The 7 Key…
This Young Leopard Hunting Has No Idea…
What Do Leopards Eat?
How Many Leopards Are Left In The…
10 Incredible Amur Leopard Facts
Next Level Leopard Somehow Catches an Eagle

Technically speaking, the terms “panthers” and “leopards” can refer to the same animal. Yet, panther also refers to other “big cats”, especially jaguars. The differences between these animals might seem only as deep as their fur. There is some truth to that idea since black panthers are melanistic variants of leopards and jaguars. However, when comparing a leopard vs panther, we have to look at how the overall concept of a panther differs from the leopard.

That’s why we’re going to show you whether a panther or a leopard would win in a fight by going over the major differences between these cats. Using the data for jaguars under the umbrella term “panther” and the data for leopards, we’ll figure out which creature has the best chance of winning a fight.

Comparing a Leopard and a Panther

The key factors in a fight between a leopard and panther are split between their physical bodies and the way that they fight. Specifically, we need to evaluate their size and power, how they attack, and the senses they use when hunting other creatures.

By considering multiple elements of their biology, we’ll have the opportunity to establish one creature as superior to the other by assigning various advantages to each.

What Are the Key Differences Between a Leopard and a Panther?

The biggest differences between a leopard and a panther are their size, color, and power. Panthers are larger than leopards since we are using the biologyof a jaguar to populate their physical statistics. Panthers can weigh upwards of 300lbs, but leopards max out at 198lbs. That disparity is significant and impactful in the fight.

Also, panthers are black with dark rosettes that are barely visible or not distinguishable at all. Leopards are brownish-orange with black rosettes and a white underside. These differences make it easy to tell these animals apart.

Lastly, panthers are stronger than leopards, and that is impactful in terms of a fight, but it is difficult to see by looking at each animal.

Physical Features of a Leopard and a Panther

The leopard is a lithe, powerful mammal that lurks in trees and underbrush waiting to kill its prey. While panthers are technically the same in a sense, they are unique in that they prefer to stay near water because they’re such effective swimmers! Let’s take a closer look at how each creature measures up against one another.

Panthers are larger than leopards. Panthers can weigh up to 300lbs, grow 6.2ft long, and stand 2.5ft high. Leopards only grow to 198lbs, grow to 6.2ft in length, and stand up to 2.3ft tall. The size difference is not too profound, but panthers have a lot more muscle.

Panthers have the size advantage.

Leopard vs Panther: Speed and Movement

Panthers are faster than leopards. Although leopards can run at 40mph when closing in on their prey, panthers top out at 50mph in speed.

Panthers have the speed advantage against leopards.

Leopards and panthers have very similar senses. Both animals have a powerful sense of smell, a sense of vision that is several times better than a human, and hearing that allows them to sense sounds at far greater ranges than humans.

Leopards and panthers tie in terms of sensory capabilities.

Both leopards and panthers use their speed to outrun most of their predators, climb trees, and use stealthy movements to evade predators. However, the panther is a better swimmer than a leopard. Thus, they can survive in more adverse situations than leopards.

Panthers have better physical defenses than a leopard.

Combat Skills of a Leopard and a Panther

Leopards and panthers have similar fighting skills. They’re both ambush predators that use their power to overwhelm and kill their prey as quickly as possible. Leopards are unique in that they will use stealth to get very close to their prey before launching an attack. Once they kill their prey with their teeth, they drag it into the brush or into a tree branch to finish eating it.

Panthers are highly aggressive animals that are very territorial and nearly invisible at night. They camouflage themselves well and then pounce on their foes, swiftly ending the fight and killing their prey with a devastating bite to the neck.

Who Would Win in a Fight Between a Leopard and a Panther?

A panther would win a fight against a leopard. Panthers are larger than leopards, have a stronger bite, and have better hunting skills. In an ambush situation, the panther would seemingly appear out of the night and overwhelm the smaller leopard with vicious bites and raw power.

If the two somehow met in an open field, the sheer aggressiveness and power of the panther would ensure a victory, but it would not be easy. The leopard’s teeth and claws would leave their mark as the two animals tumble around in a ball of fur and fury. Still, the chances are higher that the panther emerges victorious than the leopard. 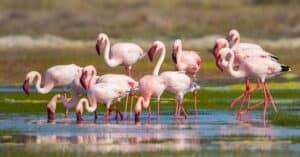