It's easily identified by its crest, large size, and wingspan 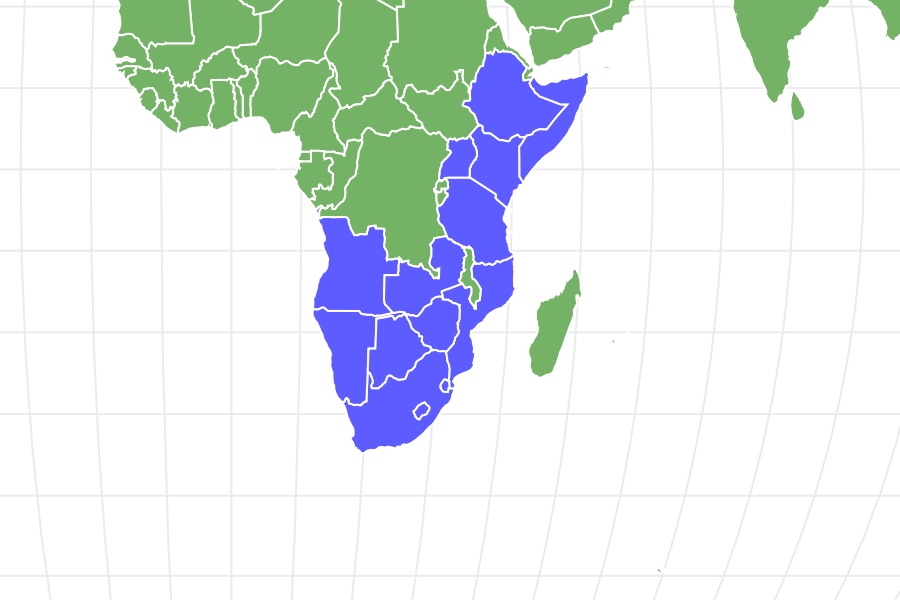 View all of our Kori Bustard pictures in the gallery.

View all of the Kori Bustard images!

The Kori bustard is the largest animal able to fly, especially the male, which is heavier than the female.

This bird species is a member of the bustard family, and like all bustards, is a ground-dwelling bird. It is an opportunistic omnivore that is present in southern Africa and lives in open grassy areas. Scarce in unprotected areas, their populations have declined as a result of hunting, poisoning, bush encroachment, and agricultural development, and it is listed as a near-threatened species.

Where To Find Kori Bustards

The kori bustard has a geographic range throughout southern Africa, but it is native to both eastern and southern areas. It is most common in Botswana and Namibia and locally common in Zimbabwe. You can find it in open grassy areas with sandy soil, and sometimes in other areas except for dense woods. When it’s in dry grasslands, it seeks shelter from the heat under groups of trees along dry watercourses. You’re most likely to find them during the breeding season, around their food sources, or near watering holes.

The kori bustard’s breeding habitat is in open savanna with light grass, trees, and shrubs, or sometimes hilly areas. Like other bustard species, the female does not make a true nest. Instead, she lays her eggs on the ground in a shallow area 12-18 in diameter. The nest is usually 13ft away from a shrub, tree, termite mound, or pile of rocks, and is hard to find unless someone accidentally stumbles upon it. She tends to use the same site for several years.

Kori bustards belong to the class Aves (birds). The common name of this bird species is kori bustard. It is called “Christmas turkey” in Namibia and “Kalahari Kentucky” in South Africa. The scientific name is Ardeotis kori, and in the genus Ardeotis there are four species. Its family is Otididae (bustards). Its English name of kori comes from its African name in the Setswana language, which is kgori. There are two subspecies of A. kori, A. k. kori and A. k. struthiunculus.

The main colors of the kori are brown with grey with fine black and white patterns. Its upper body and neck are greyish tan and black, followed by a black collar that goes down the sides. Its side feathers are sandy brown, black, and white. It has a black crest on the top of its head that the male has more coloring of than the female. Above each eye is a white stripe. The neck, throat, and chin are white with fine, thin black barring. The neck feathers are loose and give the appearance of a thicker neck. The belly is white, while the tail is white and brownish-grey. A large head pairs with pale yellow eyes and yellowish legs with three front-facing toes.

Juvenile birds are similar in appearance to females but with more brown as well as mantle spots, plus a shorter crest and neck feathers. Male juveniles are still larger than females but are less bulky than adult males.

This bird species is always in open areas and stays away from wooded ones so it has enough space to take off running when threatened. It looks for food during the day and does not migrate. Males are aggressive during mating season. When landing from flying, the bird keeps its wings spread until it has reached walking speed. Like other bustards, it avoids flying and when the female is incubating eggs, she’ll only fly at the last minute. She does not make a real nest but instead lays her eggs in shallow hollows.

The call of this bird species depends on what is happening. It has a loud mating call and when threatened, has a loud, growling bark. Sometimes, it is aggressive to other animals at watering holes and raises its crest, opens its wings, and pecks at them.

Although the kori bustard does not migrate, unlike many other African birds. It is sometimes nomadic, irregularly moving at night to new habitat areas according to rainfall. Also, adult and juvenile males move after breeding season, whereas the females stay.

Kori bustards are opportunistic omnivores, meaning their diet has both animal and plant matter according to opportunity. They follow foraging ungulates to feed after them. Sometimes, they feed in wheat fields and other agricultural areas. They are sometimes accidentally poisoned by humans who are doing pest control on locusts.

What do kori bustards eat?

This bustard species is threatened by hunting, poisoning, brush encroachment from livestock, and agricultural development. As a ground-dwelling bird that avoids flying, it is vulnerable to land-dwelling predators.

The baby kori bustard is called a chick, while the young is called a juvenile. Its lifespan is 26-28 years in captivity. The birds mate by sexual reproduction and breed from September to February (A.k. kori) or mid-March or December to August (A.k. struthiunculus) depending on the subspecies. Their breeding is very much connected to rainfall, as breeding is rare or doesn’t happen at all during drought.

Males engage in mating behavior called lekking in which they come together to do courtship rituals for females. They do so at regular lekking sites during the mornings and evenings. They are polygynous, so one male will attract and mate with several females. During courtship displays, the males hold their heads back and bulge out their cheeks, inflate their throat pouches, hold their bills open, puff out their front neck feathers and stick up their crests. They raise their tails up and lower their wings. Then they stride and emit loud booming calls. When the males fight each other, they smash and peck at each other.

Males do not have any part in raising the young. Females lay about 2 eggs, which are 2.3-2.4 in width, 3.2-3.4in in height, and 4.3-6.3 oz in weight with an average weight of 5.3oz. They incubate them for 23-24 days, rarely drinking and never eating, and dropping bits of vegetation onto their backs for camouflage. They bring softened food to their chicks. The chicks at first weigh 2.8-4.1 oz but quickly grow, and they’re able to follow their mothers a few hours after hatching. They can forage with their mothers after a few weeks. Fledging at 4-5 weeks, they get to flying independently at 3-4 months. They leave their mothers during their second year and reach sexual maturity at 3-4 years for both sexes.

The kori bustard is listed as a near-threatened species and not threatened because its geographic range is large and its population decline is slow. It is threatened by livestock farming and ranching, hunting and trapping, and utility and service lines.

What is a kori bustard?

It is a large, ground-dwelling African bird that is able to fly.

What eats a kori bustard?

Birds of prey and ground-dwelling mammals.

Is the kori bustard extinct?

No, but it is listed as near-threatened.

Why is the kori bustard the national bird of Botswana?

It is important to the people’s cultural symbolism and in their diet, particularly the San people’s songs and dances and its meat reserved for royalty. It is impressive because of its large size, the males’ elaborate courtship displays, and the nesting females’ secretive behavior.

Does the kori bustard migrate?

No, but it is sometimes nomadic.

How many eggs does the kori bustard lay?

It lays 2 eggs. However, usually only one ends up hatching.

How fast does the kori bustard fly?

Their flying speed is unknown because they don’t stay in the air long enough to measure.

What is the kori bustard’s wingspan?

When do kori bustards leave the nest?

During their second year of life.