The 5 Best Fish to Catch in Idaho This Summer

The experience of seeing your first catch wiggling on the line is one you’ll always remember. Whether you’re targeting modest-sized fish or gigantic lunkers, Idaho has something for everyone. By knowing what species to look for and where to look, you’re bound to be successful.

Read on to learn the 5 best fish to catch in Idaho this summer!

First on our list of the best fish to catch in Idaho this summer, let’s talk about Chinook salmon. A few of the common names for chinook salmon include king salmon, spring salmon, and black mouth salmon.

There isn’t any other West Coast salmon sought after with the same tenacity as the Chinook. Chinook salmon are a gorgeous species. The adults have iridescent green to green-blue backs and silvery sides. They also have spots dotting their body. Their mouths are usually black, which is the nickname “black mouth.”

You’ll find that Chinook salmon are feeding machines. They can put on 50 to 60 lb within two to three years. That means you’ll be able to catch some trophy-sized fish in the Idaho waters.

You can catch Chinook salmon year-round, but the summer and fall seasons seem to provide the best opportunities in Idaho. To get their attention, you want to use a bait that you can suspend above the water. Try using different colors, too, such as fluorescent orange or red. Chartreuse and white-colored baits also work well. You’ll also have a lot of luck with downriggers and flashers. Overall, using various terminal tackles will make the day successful.

Common names for coho salmon include silver salmon, coho, blue back, and silvers. Coho salmon are a new fishing opportunity in Idaho. These fish put up a great fight! They’re highly sought after by anglers who want a challenge.

Coho salmon have an unusual habit of wrapping themselves around the line by spinning their bodies in the water. This can cause the lines to be severed by their sharp gill plates. For the best results, you’ll need to tie on a leader. The leader can be attached to a barrel swivel tied to the main line, which will help prevent broken lines.

Remember to take your time when you’re fighting a coho in a large lake. There’s no need to rush the fight or take unnecessary risks. As long as the fish isn’t threatening to spool off all of your lines, there aren’t any problems that can snag up your line. You must wait for the coho to run and gently pump it back towards you. You’ll seldom lose a coho fish by taking your time and repeating the sequence.

While black crappie prefer the large ponds in Idaho, the white species prefer turbid waters. White crappie are most at home in rivers, reservoirs, and bays, whereas black crappie love traveling in schools and usually spawn in shallow waters.

Fly riding has been one of the most popular styles of crappie fishing. You’ll find both species are shy and cautious compared to other sunfish family members. On some days, crappie will bite easily, but they’ll be oddly reluctant on other days. You’ll need to use light lines and move about with a measure of stealth to have any luck.

Bait fishing often works best with a 4 lb test line and four or six hooks baited. Then use one to two-inch minnows hooked through the tailback or lips. Other effective baits include strips of fish meat, garden worms, grasshoppers, and crickets.

Rainbow trout are among the best fish to catch in Idaho this summer because they can reach considerable sizes. Pulling a 12-inch resident rainbow from a river is a regular occurrence. Since they enjoy a carnivorous diet, you’ll find that these fish go after small fish, worms, fish eggs, and even sometimes small birds and mammals!

When fishing for rainbows, anglers tend to use one of three methods. They either use bait, flies, or artificial lures. Bait is one of the most popular ways of catching rainbows in Idaho. Some of the best bait includes worms, minnows, corn kernels, cheese, leeches, and grubs.

Common names for sockeye salmon include red salmon, silver salmon, and sockeye. Sockeye salmon are famous for their spectacular migrations. Some of them, like red sockeyes, were introduced to Idaho from the Snake River (an endangered river) to help preserve the species.

Along the west coast, sockeye salmon are believed to be among the best-tasting Pacific salmon. They have bright red flesh, high protein content, and just the right amount of oil. Sport anglers and commercial fishermen alike love catching sockeyes.

A well-presented fly that imitates the foods they like can trigger them into striking. Stick to small lures such as crankbaits, spoons, or spinners. Since sockeyes feed on all sorts of small invertebrates, the smaller the lure, the better.

You’ll also need to be picky about what type of hooks you use. Sockeye salmon are soft hitters. You’ll need to use sharp sticky hooks to penetrate their skin. Once you catch one, be careful. These fish are spunky! Use the tailing glove to easily handle them for your victory photo.

Watch a Rooster Walk On a Crocodile’s Face 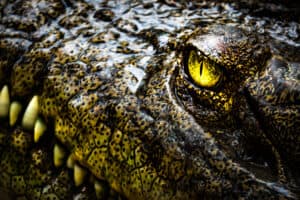