iStock.com/RobertAx
Share this post on:
More Great Content:
What Kills Ticks On A Dog Instantly?
8 Ticks in Arizona: Yes There Are…
Ticks in Missouri
Bugs That Look Like Ticks, But Are…
What Are Seed Ticks And How To…
Details on 6 Ticks in Arkansas

Ticks are small, blood-sucking, parasitic insects with eight legs varying in color from brown to red to black. These insects live in grasslands and feed mainly from roaming animals, such as deer, rabbits, birds, lizards, squirrels, mice, and other rodents. They also like a damp, moist environment that tends to be closer to the ground, for example, between tree trunks, fallen branches, tall undergrowth, and overgrown areas. As tiny as these insects are, do they have any predators? Well, let’s find out as we explore what eats ticks.

The Background on Ticks

Although ticks are a common insect name to humans, only a few of us know much about them. These small-scale insects may appear complex to study because of their small sizes. Fortunately for us, acarologists have made it simpler to understand how these insects feed, what they eat, and how long they survive without food. Most ticks need a host to attach to and feed on within a month. However, some species live up to 117 days without sticking to a host. The rocky mountain wood ticks, for example, can survive more than 300 days without food when they molt into nymphs.

Intrigued, are you? Let’s dive as you read through this article to learn more about animals that eat ticks.

Animals such as chicken, guinea fowl, wild turkeys, ants, spiders, opossums, frogs, squirrels, lizards, ants, and fire ants eat ticks. As tiny as they are, ticks have a variety of natural predators who eat them. Let’s look into them one by one.

Unfortunately, a few percent of humans dislike opossums for their looks. However, they are somewhat beneficial as they cause little to no damage to humans and the environment. Opossums are nocturnal animals resembling mice, and surprisingly, they are one of the only marsupials (particularly Virginia opossum) living in the United States and Canada. They eat both plants and animals and, shockingly, are not selective about what to eat. They mainly look for food on the ground as they move around, consuming undesirable insects like ticks. Opossums constantly groom and clean themselves and, in the process, eat up the ticks that attach to their bodies.

Chickens are common livestock many people keep in their homes. Most times, they are kept for their meat and eggs purposes. But then, aside from their domestic use, they serve a greater purpose – other than meat and eggs, they help keep insects away from the environment. These gregarious birds are good at picking up food from the ground, with no exception to ticks.

Like chickens, birds also look for food on the ground and eat insects and bugs when they encounter them. Consequently, ticks fall prey to them when they go about searching and picking food from the ground. Birds help eliminate disease-carrying insects by consuming them. But, there are exceptions with larger birds like eagles and hawks. Shocking as it seems, these larger birds do not have the time to snack on mini insects like ticks; instead, they feast and hunt other sizable animals.

Toads and frogs are two surprising amphibians that eat almost any insect, including ticks. Sometimes female ticks serve as bait to catch toads.

Unlike toads that spend more time on land and encounter ticks often, frogs spend more time in the water and consequently do not have ticks at their beck and call. However, when frogs come in close contact with ticks, they avariciously eat them.

Guinea fowl belong to the same family as the peacock, and they are native to Africa. Their diets are mainly composed of insects like ticks, and they stunningly pick these foods from the ground. Guinea fowls are not selective with food, so they gobble them once they set their eyes on ticks.

Do Ticks Defend Themselves?

Although this question appears direct, it is only wise to say that ticks instinctively defend themselves as other humans and animals. Unfortunately, ticks cannot fight back, but they have some form of immunity against bacteria found on their human host. Moreover, their saliva contains many proteins that kill bacteria.

Where are Ticks found?

Ticks are most commonly found in natural areas like tall grass, wooded areas, or fields where their host animal roam. They are also found within homes and offices, but this isn’t a natural habitat for them unless carried indoors by persons or pets. Some ticks bite people and pets, while some others infect their host with dangerous bacteria, viruses, or parasites.

In general, ticks live in areas where deer, rabbits, birds, lizards, squirrels, mice, and other rodents feed and roam, but they can be found in urban areas and coastal beaches.

Below are some typical habitats notable to ticks:

One must understand the dangers of disease in general before delving into knowing if ticks are harmful. Well, talking about diseases, we will say that it is an abnormal medical condition that adversely affects the human or animal immune system. Surprisingly, most ticks carry these tick-borne- diseases that affect both humans and animals when they bite, but others are harmless and do not require treatment.

Examples of such ticks are the deer ticks and wood ticks – they transmit harmful bacteria that cause diseases such as Rocky Mountain spotted fever (RMSF) and Lyme disease. Unlike other ticks, deer ticks are microscopic and, by default, not easily seen on the skin surface of their hosts.

How To Remove Ticks From Your Skin

Here are a few guidelines to remove ticks from your skin: 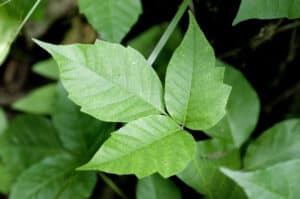 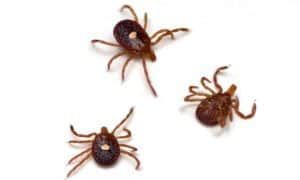 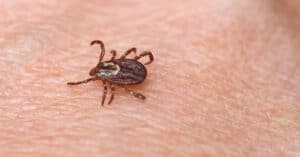