The guinea fowl is a family of ground-feeding birds that resembles a turkey or a pheasant. 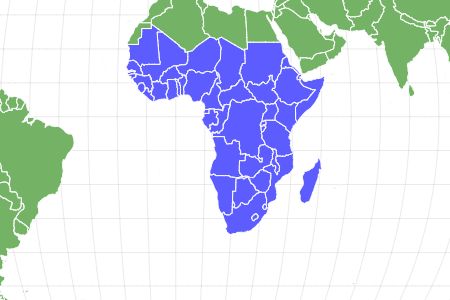 View all of our Guinea Fowl pictures in the gallery.

View all of the Guinea Fowl images!

The guinea fowl is a family of ground-feeding birds that resembles a turkey or a pheasant.

It’s often seen roaming around the plains of Africa and picking at the ground for food. The guinea fowl family consists of around seven to 10 species, each with its own unique appearances and behaviors. Together they fill a similar ecological niche as many other big-bodied fowl elsewhere.

Where to Find Guinea Fowl

Guinea fowl are birds that are completely endemic to the warm and tropical forests, savannas, scrublands, farmlands, and even semi-deserts of sub-Saharan Africa. Flocks of these birds will sometimes roam around urban areas as well. They have several adaptations to deal with the harsher African climate.

When the breeding season arrives, the bird builds communal nests in isolated and shallow depressions. Lined with light vegetation, these nests are usually hidden in cover to prevent predators from consuming the eggs. The male is usually the one who stands guard over the nest.

The scientific name for the family of guinea fowl is Numididae. This is the Latin name for the ancient region of Numidia which used to be part of the Roman Empire and is now covered by the country of Algeria. Actually, the scientific name is a bit of a misnomer, because all species are native to sub-Saharan Africa and not Algeria. These birds belong to the order of Galliformes along with quail, partridges, pheasants, peacocks, chickens, and turkeys.

These birds have a big curved body with a short beak, a hunched posture, a very long neck, and a rather grizzled, featherless head (which probably serves the purpose of releasing excessive heat). They measure around 16 to 28 inches in length and weigh up to 4 pounds. Most species have black or brown feathers with white spots on them, but the aptly named white-breasted guinea fowl also has a white-colored breast as well.

The head is usually covered by some combination of red, blue, brown, or tan. However, a few species exhibit some exotic accouterments. Both the plumed and crested guinea fowl carry around a black crest on the head, while the vulturine guinea fowl has a series of lance-shaped feathers that stick out visibly from the body. Despite the name, the vulturine guinea fowl bears only a superficial resemblance to the vulture. This species is in all other respects a pure guinea fowl.

These birds are very gregarious and social birds that organize themselves into flocks of varying sizes. These communal flocks usually spend the day pecking the ground for food and use their strong claws to dig through the dirt. It is most active in the morning and late afternoon hours when the heat is more tolerable, but at night they take to the trees for sleep. The flock sticks closely together and sometimes moves in a single file line.

The birds communicate with each other through harsh and repetitive sounds that are distinctive to the sex. They are generally a friendly bunch, but sometimes interactions between males can degenerate into dangerous and bloody fights. To make themselves appear bigger, the males will stretch out their wings, bristle their feathers, and make aggressive sounds. They will also sometimes charge at each other with the intention to injure or harm.

Although its breasts and wings are very strong, the guinea fowl is not a migratory bird or much of a flyer at all. It is a terrestrial bird that would rather stick to the ground and outrun its predators, but the wings do enable it to escape from particularly tough situations with short bursts of flight.

These birds occupy an intermediate part of the food chain. It consumes vast quantities of small prey and vegetation (sometimes even helping to disperse seeds around the environments), but in turn, it is also a common source of food for many of Africa’s more voracious predators.

What does the guinea fowl eat?

The guinea fowl is an omnivorous bird that consumes roots, tubers, seeds, reptiles, rodents, insects, and fruit. The helmet guinea fowl is known for its voracious appetite and therefore makes for a very good domestic pest killer.

What eats the guinea fowl?

These birds have a long list of potential predators, including crocodiles, snakes, leopards, and other big cats. In a domestic setting, any predator that would attack a chicken would also attack them, including foxes, wolves, coyotes, and bears. These birds do have a few defenses such as its ability to fly, but head to head it is no real match for a dangerous carnivore.

The helmeted guinea fowl, which is the most closely studied and well-understood species, forms a close monogamous bond with a single mate over its lifetime. The couple’s nest may contain up to 20 eggs at a time, but these nests are communal in nature and may contain eggs from multiple pairs.

As seasonal breeders, these birds usually lay eggs in the spring and summer, right after the height of the annual rainfall when resources are most abundant. The young chicks or keets, as they’re often called, emerge from the eggs after about four weeks of incubation. Born with downy feathers, the birds are able to start walking around with their parents immediately, but they still require several months to grow, learn the ropes, and develop their full flight feathers.

The parents are highly involved in the care of their offspring to give them the best chance of success. They are naturally inclined to split duties: the mother incubates the eggs, while the father stands guards, and provides protection. After some eight months to a year, the offspring are ready to begin a new independent life of their own. They will reach sexual maturity at two years of age, but the female only has a limited time to reproduce. Her egg production ability often slows down by the age of five and stops completely at eight. If it survives long enough, the life expectancy of the guinea fowl is between 10 and 15 years.

These birds are a very common family and widely distributed across most of sub-Saharan Africa. According to the IUCN Red List, which tracks their conservation status, seven species are classified as least concern, the best possible ranking. Only the white-breasted guinea fowl is vulnerable to extinction. Population numbers are hard to come by, but just to take one species, it’s believed there are at least 10,000 mature vulturine guinea fowl left in the wild.

These birds have a few advantages over other animals. First, they can adapt to a variety of different habitats and circumstances, from forests to plains. Second, since domesticated birds are raised for meat, the wild guinea fowl are hardly disturbed by humans. In fact, human activity may actually benefit them, since we hunt and eliminate their larger predators.

View all 157 animals that start with G

Guinea Fowls are Omnivores, meaning they eat both plants and other animals.

How many eggs does the guinea fowl lay?

The guinea fowl usually lay about 20 eggs per year in two clutches.

How fast does the guinea fowl fly?

The guinea fowl’s flight speed isn’t well-documented, because it prefers the ground.

What is the guinea fowl’s wingspan?

The guinea fowl has a long wingspan measuring up to 6 feet.

When do the guinea fowl leave the nest?

The guinea fowl becomes independent after about eight to 12 months.

What do guinea fowl eat?

Do guinea fowl need a coop?

If you are raising guinea fowl in captivity, then it is a good idea to set up a coop for them. They will quickly acclimate to a coop if you train them from an early age to recognize their new home.

Can guinea fowl be kept with chickens?

While guinea fowl can be a little more aggressive than chickens, it is possible to mix them together, especially if raised together from an early age.

Guinea fowls are naturally wary birds, but they can grow to become friendly toward people they recognize. Again, for best results, you will want to socialize the birds from an early age.

What class do Guinea Fowls belong to?

What phylum to Guinea Fowls belong to?

What family do Guinea Fowls belong to?

What order do Guinea Fowls belong to?

What type of covering do Guinea Fowls have?

Guinea Fowls are covered in Feathers.

In what type of habitat do Guinea Fowls live?

What are some predators of Guinea Fowls?

Predators of Guinea Fowls include large mammals and reptiles.

What are some distinguishing features of Guinea Fowls?

What is an interesting fact about Guinea Fowls?

Guinea Fowls are found in a variety of African habitats!

What is the lifespan of a Guinea Fowl?

How do Guinea Fowls have babies?

What are the differences between turkey and guinea fowl?

The biggest differences between a guinea fowl and a turkey include their size and egg size.

The average guinea fowl weighs up to 3.5 pounds, stand 1.9 feet tall, and grows 30 inches long with eggs that are about 2 inches in length, with a production rate between 80 and 160 eggs a year at the utmost. Turkeys weigh up to 30 pounds, measure 3.5 feet tall, and measure up to 46 inches in length while having eggs over 3.5 inches long while producing about 100 each year.