What Do Oysters Eat? 5 Foods They Consume

Oysters are bivalve mollusks that live in salty coastal waters, rivers, and bays around the world. These creatures are covered by hard shells that can be opened for feeding and other biological needs or closed when conditions turn adverse. Looking at an oyster, it may be hard to imagine that they eat at all! Their unique physical characteristics beg the question, what do oysters eat?

Not only will we show you the various foods that oysters eat, but we will also tell you how they manage to consume food and consider what they need to watch out for in the waters.

What Foods Do Oysters Eat?

Oysters eat algae, phytoplankton, and zooplankton. These omnivores consume plants and animals, though they do so in very small amounts.

Oysters are unlike most creatures that live in the sea. They lack the means to hunt for food and they do not move much. Early in their lifecycle, an oyster will use a temporary “foot” to find a suitable substrate upon which to anchor themselves for the duration of their lives. Once a favorable location is found, the oysters attach themselves to the surface and lose the foot.

Instead of hunting food, oysters allow the food to come to them. They filter their food directly from the water that surrounds them, consuming valuable nutrients and helping to clean the water in which they live.

An oyster’s available food sources depend on where it lives and the quality of the water. Fortunately, these mollusks are not very picky, filtering through dozens of gallons of water each day to source their food while simultaneously cleaning the water.

How Do Oysters Eat?

If you look at an oyster with its shell opened, then you will find yourself staring at a grayish-beige blob. There appears to be no indication that one part of an oyster is different from another. As much as we question what oysters eat, it’s also appropriate to ask how they eat.

The process begins when the oyster detects that the conditions are right for feeding in its body of water. They follow cues from ambient temperature, circadian rhythms and are believed to follow tidal fluctuations as well. When their shells open, the oyster will filter water through its gills, retaining the food and expelling the rest.

Basically, oysters collect the foods we’ve mentioned before, removing algae and plankton from the water through a filtration process.

Using ciliary action, the food is guided to the labial palps that surround the oyster’s mouth. Sometimes, food is rejected by the palps because the food is not fit for one reason or another. These portions are called pseudo-feces.

Acceptable food is passed into the mouth where it is consumed and processed. On the whole, oysters are not too different from other sea-dwelling animals. The put food in their mouths for consumption and that leads to a stomach before going into the intestines. Any waste is passed out of them and then out of their shell.

Oysters have a unique way of eating food, but the way they find food has serious environmental benefits.

How Does the Oyster’s Diet Impact Other Species?

Although oysters may seem somewhat removed from the rest of the food chain, they play an important role in keeping waters clean. Oysters filter suspended sediments, nitrogen, bacteria, and algae from water while they are in the process of finding nourishment.

By doing this, oysters are actually cleaning the water and preventing the onset of eutrophication, a process in which increased amounts of nutrients in the water leads to ecosystem changes. Some of the more problematic elements of this process include:

These are just a few of the issues caused by eutrophication. Direct results include fish deaths, damage to commercial fishing processes, and the death of creatures that drink tainted water. These effects, on a large scale, can have a tremendous, negative effect on habitats.

Fortunately, oysters, whether living in the area or introduced artificially, can help remediate waters. Overall, the diet of oysters benefits many species that do not directly interact with oysters.

What Do Oysters Eat During Winter?

During winter, oysters eat nothing or very little of their typical foods.

Although oysters lack a central nervous system, they can detect when their habitat is likely to have food. They use a combination of circadian, lunar, and tidal cycles along with temperature fluctuations to understand when to open their shells and filter water and when it’s time to stay closed.

When the water reaches a low temperature, oysters enter a state of hibernation. They become much less active in the cold waters, saving their energy, and then reopening when the waters start getting warmer again.

During this dormancy period, oysters rarely open their valves and barely pump water, if at all.

What Are Oysters’ Predators?

Making a meal of an oyster can be tough since they can hide within their strong shells. However, oysters lack a means of conveyance, so if they get caught by a predator, they can’t get away.

Here are some of the most common oyster predators that stand a chance of eating these mollusks:

It is important to note that many of these predators capture larvae or juveniles rather than old, established oysters.

Nevertheless, humans are among the most successful oyster predators, having developed specialty devices for finding and harvesting these mollusks. They frequently shuck and then consume live oysters and farm them for sustainable food sources.

Other creatures are also effective at catching and consuming oysters, including oyster drills, snails that can use their radula to cut a hole in the shell and then consume the prey within. Still, it is not easy for most predators to get to these creatures.

Oysters are mollusks that filter water to obtain their foods. They do not eat a wide variety of foods, but oysters are important members of the ecosystem since they help to clean water and prevent eutrophication. These creatures are not the most interesting animals lurking beneath the waves, but they’re still highly useful. 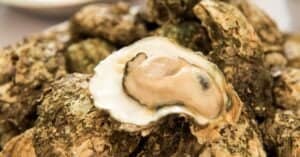