Some people use sponges as sponges Click through all of our Sponge images in the gallery. 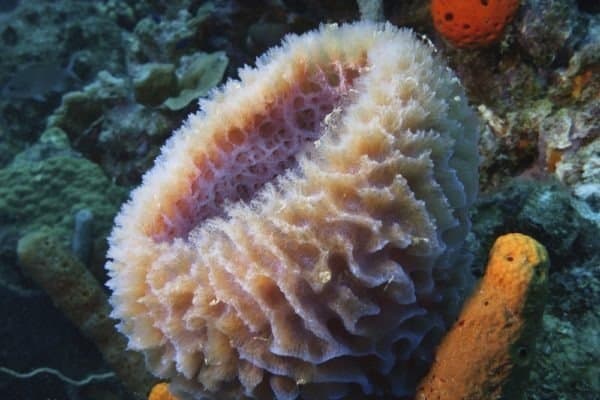 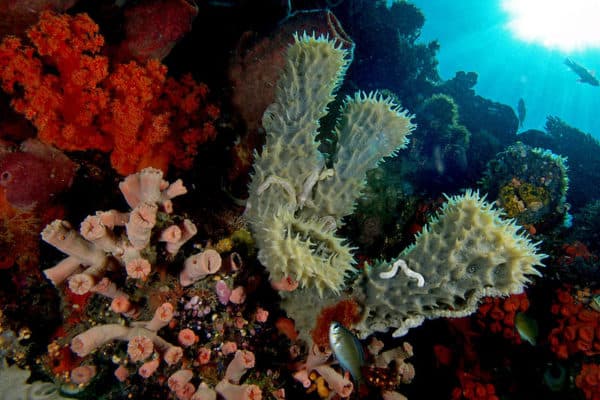 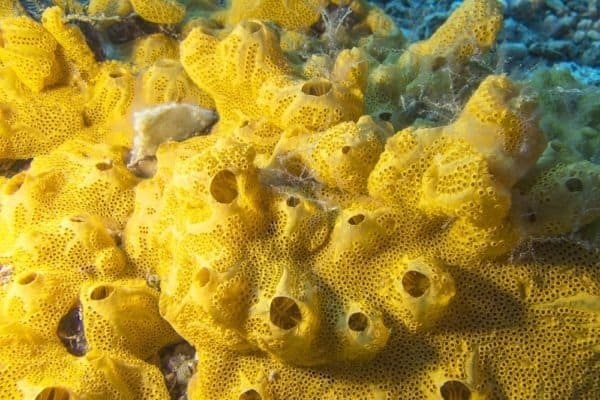 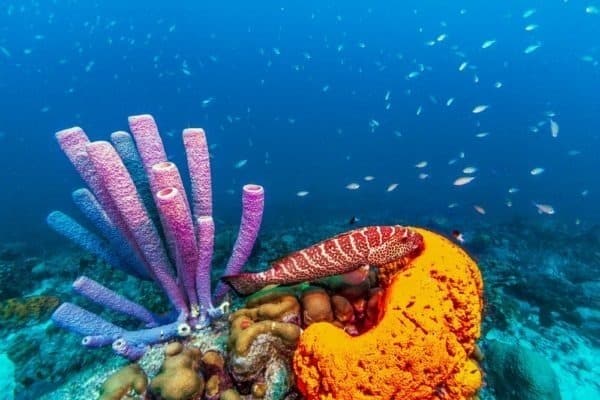 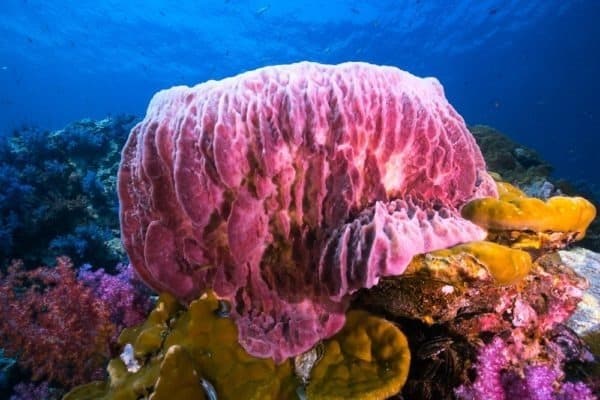 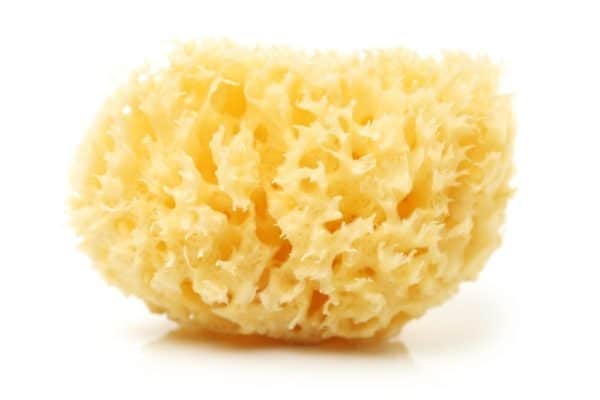 View all of the Sponge images!

Sponges are one of the simplest, and perhaps oldest, animals on the entire planet.

They are marine animals that are easily mistaken for plant life due to their lack of nervous system, internal organs, and mobility. All sponges belong to the taxonomic phylum Porifera, which is part of the kingdom Animalia and encompasses over 500 genera and between 5000 and 10000 different species. All sponges are aquatic animals with the vast majority living in saltwater environments.

All sponges are members of the Porifera phylum, which means “pore bearing” or “pore bearer” in Latin. This name comes from the many visible pores that cover their surfaces. This phylum is divided into four classes: Calcarea, Hexactinellida, Demospongiae and Homoscleromorpha. The common name of “sponge” actually traces its origins back to Ancient Greek.

Due to their many unique characteristics compared to all other types of animals, sponges have been designated into taxonomical isolation within their own phylum. However, despite their many shared characteristics, there are also plenty of genetic divisions among the thousands of known species. The four existing classes within the Porifera phylum are based on key differences in physiology and habitat.

With thousands of different species within the phylum, it should be no surprise that there is immense diversity among them when it comes to size, shape, and color. Most are easily mistaken for coral or plants due to their stationary nature and rigid structure. They are often covered by a soft and fleshy exterior, but their sharp and solid spicule skeletons may be exposed as a deterrent to predators or due to damage.

All sponges are also characterized by the presence of holes along their surface and channels throughout their body. Since they lack an internal circulatory system, these pores allow water to move through naturally to provide oxygen, introduce microscopic food particles, and remove waste. Many of these animals are tubular with a large cavity visible in the center, but they can also grow into shapes similar to trees, fans or shapeless blobs. Depending on species, they can also be less than 1 inch tall or well over 5 feet in height.

Members of the Porifera phylum are found throughout the world’s seas and oceans, as well as some lakes and other freshwater bodies. The overwhelming majority of the roughly 9000 known species live exclusively in marine environments, with between 100 and 200 found in freshwater ecosystems. Some researchers estimate that there are still many thousands of sponge species left to be discovered in remote areas and deep ocean environments.

Since the vast majority of species consume plankton and other microscopic life by filtering the surrounding water, they prefer clear and calm waters with minimal contamination from sediment. They often anchor onto a hard surface, like rocks, reefs or even shelled animals, but some can also grow roots long enough to attach to sand and other loose substrates. Populations are typically more diverse in tropical climates compared to temperate and polar ones.

Their lack of mobility is a serious biological vulnerability for sponges, which has compelled the development of many natural defense mechanisms. Spiny spicules on the surface and released onto the surrounding terrain help repel starfish, sea urchins and other echinoderms that can prey on sponges. Potential predators can include various types of insects, fish, turtles and parasites depending on habitat. Sponges are also harvested and cultivated for various commercial purposes by humans.

What Do Sponges Eat?

Most sponges are filter feeders, which means they feed passively by consuming microscopic plant and animal life from the water. There are also some species that form symbiotic relationships with photosynthetic bacteria that allow them to derive energy from sunlight. Some smaller sponges take advantage of their size and passive mobility to prey on other animals. These so-called “boring sponges” attach to hard exterior of shellfish and erode the shell to prey on the animal within. Clams, oysters and other mollusks are a primary target, as well as some crustaceans.

Sponge: The Animal’s Reproduction and Lifespan

Sexual reproduction is the typical method of propagation, but some can also conduct asexual reproduction. Most sponges are hermaphrodites, which means each individual has both male and female cells. In sexual reproduction, a sponge releases eggs into the water where they float until captured by another sponge that fertilizes them. Sponges may conduct both activities at the same time or undergo alternating periods of releasing and fertilizing eggs. Average lifespan ranges from less than 1 year to up to 20 years, with some species able to survive for many centuries.

Fertilized eggs are released as floating larvae that propel themselves with a layer of flagellating cells. Once they find a stable surface in a suitable environment, they attach and begin a metamorphosis into a proper sponge. This process involves movement and transformation of cells throughout their body to facilitate development of specialized functions.

Asexual reproduction is often a survival mechanism that allows a sponge to release small colonies of cells. This process is called gemmulation and it allows a degenerating or ding adult to release small clones that might fare better in the unfavorable conditions. Sponges also have profound regeneration capabilities, so small pieces may develop into fully grown clones of the original if they are broken off from the original.

Sponge in Fishing and Cooking

Sponge aquaculture is a blossoming industry in many areas around the world and has the benefits of being relatively simple and having little material requirements. Farming does rely on favorable water conditions and consistent management to ensure productive yields. While they aren’t used as a food source by humans, they do have practical applications in bathing, feminine hygiene, and as a source of biological compounds. Bioactive chemicals have various medicinal properties, including anti-inflammatory and anti-viral potentials.

Where are sponges found?

Sponges are found in all kinds of aquatic environments. Depending on species, they can thrive in coastal and tidal waters or in the abyssal depths of ocean trenches. They are found in waters of varying temperatures, ranging from balmy tropical climates to frigid polar waters. The vast majority live in saltwater, but there are some species that thrive in freshwater environments.

Is a sponge an animal?

As members of the Animalia kingdom, sponges are technically animals. They are relatively unique among animals due to their lack of organs, circulatory, or nervous system. Biologists consider them a sister group of all other animals due to how early they branched off in the taxonomic tree.

Sponges don’t possess legs and adults are rarely free-floating, but embryos and small sponges can propel themselves through the water. Some species can also conduct very slow migrations by transforming and moving individual cells along their base.

Where do sponges live?

Adult sponges live on substrates or solid surfaces in aquatic environments. Most latch onto rocks, reefs, or other solid and stable surfaces. Some sponges can root themselves in loose material, like sand, while others latch onto living organisms like turtles, crustaceans, or shellfish.

What does a sponge do?

Most sponges rely on their pores and internal channels to filter out microscopic food from the surrounding water. They also serve an important structural and symbiotic role in ecosystems, providing a source of food and shelter for many other animal species.

What do sponges eat?

Most sponges feed on plankton, which is microscopic plant and animal organisms floating in the water. Some species benefit from photosynthesis through symbiosis with bacteria and a few types of sponges actually survive by preying on mollusks and crustaceans.

What Kingdom do Sponges belong to?

Sponges belong to the Kingdom Animalia.

What class do Sponges belong to?

Sponges belong to the class Demospongiae.

What phylum to Sponges belong to?

Sponges belong to the phylum Porifera.

What type of covering do Sponges have?

Sponges are covered in Porous skin.

What are some predators of Sponges?

Predators of Sponges include fish, turtles, and echinoderms.

What is an interesting fact about Sponges?

There are more than 9,000 known species of Sponge!

What is the scientific name for the Sponge?

The scientific name for the Sponge is Demospongiae.

What is a distinguishing feature of the Sponge?

What is the lifespan of a Sponge?

What is a distinguishing feature of the Sponge?

What is the lifespan of a Sponge?

What is the biggest threat to the Sponge?

The biggest threats to the Sponge are climate change and habitat destruction.

How many Sponges are left in the world?

The population size of the Sponge is unknown.