What Do Sunfish Eat?

Vladimir Wrangel/Shutterstock.com
Share this post on:
More Great Content:
Flounder vs Tilapia: How Are They Different?
The 7 Most Aggressive Sharks in the…
The 10 Biggest Fish in the World
Types of Sharks: 25 Shark Species You…
What Do Fish Eat?
10 Incredible Hammerhead Shark Facts

Sunfish (Mola mola) are among the largest fish in the world and can be seen slowly drifting by in almost every tropical ocean in the world. These massive animals clock in as the heaviest bony fish in the world, often weighing 1,000kg (2,205 lbs), with some specimens growing to as large as 2,300kg (5,070 lbs). Since these slow-moving behemoths aren’t filter feeders, how do they get their good? Let’s take a look and learn: what do sunfish eat?

What do sunfish eat?

They are ecologically vulnerable fish that have been around for millions of years. Looking similar to a fishy torpedo, these fish swim horizontally and vertically while searching for food or basking near the surface.

For many years, scientists thought that sunfish primarily ate jellyfish and salps because that was all that was observed. While this is true, it was later learned that sunfish were much more adaptable and are generalists when it comes to food, not jellyfish specialists.

Aside from jellies, sunfish eat almost anything they can catch or stumble upon. Small fish and fish larvae are common elements of their diet and show that the sunfish isn’t just a passive feeder but a generalist predator.

Deeper down, sunfish also eat squid and various crustaceans like crabs, showing researchers that it’s likely the sunfish feeds on different things at different depths in the water. When they prefer certain foods, they alter their depth to align with their desired prey.

Here is a complete list of foods the sunfish eats:

Initially, scientists believed the sunfish to exclusively feed on jellyfish. Now, after mapping their genome, it’s become clear that jellies only make up 15% of their diet. The remaining 85% various as sunfish move around the depths of the ocean.

How does the sunfish get its food?

While technically predators, sunfish are slow-moving and have little control over their movement when compared to other fish with tails. On average, sunfish can only swim at 2 mph, much too slow for fast-paced hunting. Still, they can put on small bursts of speed when needed. Additionally, their hunting and feeding strategies change according to their depth (according to their diet).

While near the surface, sunfish gather their food by sucking in large portions of water into their mouths and grabbing what’s edible with their teeth. Once they have a hold of their prey, they push the water back out and swallow. Jellyfish are usually caught this way, and they are found floating near the water’s surface – exactly where the sunfish spends most of its time.

Eelgrass makes up a portion of the sunfish’s diet as well. When in shallow water, sunfish are known to float past eelgrass and take bites. Eelgrass is often known as “seagrass” and is an important part of aquatic ecosystems all over the world.

Squid and crustaceans are also on the menu for sunfish. When diving deeper, sunfish are known to feed on things that aren’t found near the surface, squid, with crustaceans being the primary prey. Squid live between 650 feet and 3280 feet down, showing that sunfish dive further down than scientists originally thought.

Where do sunfish live?

Sunfish live in almost every temperate and tropical ocean in the world. Although there are different variations across their habitat, sunfish are rather distinct in their appearance. Anywhere the water is above 54°F is a place sunfish are likely to inhabit. If the water temp stays below 54°F, however, sunfish will get disoriented and eventually die.

One of the most common behaviors that sunfish display is known as “basking”. This often amusing behavior is where the “sunfish” gets its name. Floating near the surface, they display one of their sides to the sun. This is done for two reasons. The first this that it warms the fish as it floats along. The second is that it may help kill parasites as sunfish are always riddled with extremely uncomfortable worms and other nasties.

It was originally thought that sunfish never left the upper layers of the water, but their basking behavior seems to be a mechanism that allows them to dive deeper into cold waters. Once they have warmed themselves and thermoregulated their body, they can then go looking in colder waters for a short period of time for their other prey (squid and crustaceans).

Incredibly, sunfish can be seen leaping out of the water in a behavior known as a “breach”. These occurrences are thought to help them lose parasites (of which the sunfish has many). Additionally, they will sit on the surface after breaching and allow birds to peck into their skin and remove parasites.

What eats the sunfish?

Since they are so large, sunfish have few natural predators.

In the early stages of life, before they put on serious mass, tuna, mahi mahi, and other predatory fish can easily eat them. Once they get older and larger, however, their predators change.

At full size, there are only a few animals in the ocean that can get through the thick skin and overcome the sheer mass of the sunfish. These adults can be attacked by large sharks, but typically a single shark can’t eat an entire sunfish. Once the animal is injured, other sharks come to help finish the job.

Orcas (killer whales) are also one of the sunfish’s biggest predators. Large enough to kill and eat entire sunfish, orcas have little trouble feeding on these giant fish.

Additionally, sea lions are known to injure sunfish and take bites out of them. Since they can’t really kill them, they just leave them to die with a large bite mark taken out of them. 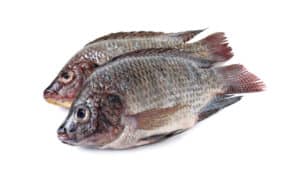 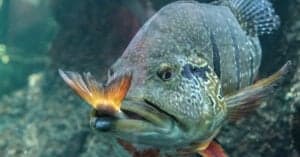