When Do Puppies Open Their Eyes?

Written by Rebecca
Updated: October 21, 2022
© Oksamutnaya/Shutterstock.com
Share this post on:
More Great Content:
Dogs With The Highest Bite Force
This Prankster Coyote Wasn’t Ready for a…
The 10 Most Dangerous Dog Breeds in…
Belgian Shepherd vs German Shepherd: 5 Key…
The Top 8 Oldest Dogs Ever
American Bully Vs American Bulldog: Is There…

Do you like puppies? Silly question! Most people like puppies of all breeds. Maybe you like holding puppies, playing with them, or watching them run around in the grass.

Well, if you’ve spent any amount of time around puppies you know they’re experts at exploring the sights, smells, and tastes in their environment.

But did you know puppies are born with their eyes closed?

Continue reading to get the answer to this question: When do puppies open their eyes?

In addition, learn about the development that goes on before a puppy’s eyes can open. Also, check how you can help a puppy remain safe while it still has its eyes closed.

Why Do Newborn Puppies Have Their Eyes Closed?

Over the span of two weeks, the eyes of the puppies will develop and begin to open. This means that the dog mother will need to protect her litter from outside factors and elements that could damage the puppy’s eyes.

Once your puppy is about two weeks, it’s eyes should begin to open. If their eyes fail to open, it’s important to contact your vet because your puppy might have an underlining medical issue.

Why Aren’t a Puppy’s Eyes Fully Developed Before Birth?

Many animals are born with their eyes fully formed and open. So, why don’t puppies fall into that category? When do puppies open their eyes?

One reason is that a mother dog can protect and care for her helpless puppies after they are born. So, the puppies can safely move through this stage of development while under the watch of their mother.

Another reason why puppies are born with closed eyes has to do with a dog’s gestation period. The pregnancy period of most dogs lasts from 58 to 68 days. Though this gestation period is relatively short, it’s enough time for a puppy’s lungs, heart, kidneys, and other major organs to form.

However, the gestation period is not quite long enough for a puppy’s vision to fully develop. Fortunately, vision development along with the development of its hearing can continue after a puppy is born.

When Do Puppies Open Their Eyes?

Generally, puppies open their eyes at ten to fourteen days old. It takes that long for the full development of a puppy’s optic nerve. But, when you think about it, a puppy doesn’t need to see until it’s further along in its life.

Puppies sleep a lot during their first few weeks of life. While they are sleeping, there’s a lot of growth happening behind their eyelids. Puppies aren’t moving around and exploring yet so they don’t need to be able to open their eyes right from birth. Also, newborn puppies spend a lot of time nursing from their mother.

They quickly become used to the smell of their mother so it’s not hard for them to wiggle around to find a place to nurse. A puppy’s sense of smell is their strongest sense even after their eyes and ears open up.

Do Puppies of Different Breeds Open Their Eyes at the Same Time?

No. Some puppy breeds open their eyes sooner than others. For instance, the German shepherd and Golden Retriever fall into the general ten-to-fourteen-day range. Alternatively, some breeds take a few days longer. Fox terrier puppies sometimes go for 21 days before they open their eyes.

Do Puppies from the Same Litter Open Their Eyes at the Same Time?

No. You would think that puppies from the same litter would all open their eyes at the same time. But it doesn’t happen that way.

The biggest puppy in a litter is likely to open its eyes a day or two before the smallest member of the litter. It makes sense. The larger puppy is a little further along in its development than the smaller one.

Can Puppies See Perfectly Immediately After They Open Their Eyes?

No. A puppy may have its eyes partially open for several hours or even a day before the lids open completely. This means a bit of time has to pass before a puppy can see clearly. As it opens its lids, a puppy is likely to see things through a gray haze until it can focus properly.

It’s important to take special care when walking around a puppy with its eyes only partially open. Keep in mind the puppy may not be able to judge where things are in its environment. You don’t want to step on it or let it get itself into a dangerous situation.

Also, it’s best to avoid quick movements around a puppy until it can see clearly. A puppy may become frightened by the quick movements of something it can’t see very well. Wouldn’t you? Using a soft, calming voice when talking to the puppies during this time is a good idea as well.

You want to do everything you can to set them at ease while they are in this vulnerable stage of development.

What If a Puppy Doesn’t Open Its Eyes Within the Typical Period of Time?

Of course, there are some situations where puppies don’t open their eyes within the typical period. This could mean there’s a problem with the growth of a puppy’s optic nerve or another health issue has arisen.

What if all of the puppies in a litter have opened their eyes except for one? Well, the puppy with closed eyes may be having a health issue. There are a few things to be on the lookout for in this situation.

A bulge or swelling beneath the puppy’s eyelid may be a sign of infection and could be the cause of its eyes not opening. Is there any discharge or pus around the closed eye? Once again, this can be an indication of infection.

Observe the puppy to see if it’s nursing from its mother. Is it relieving itself regularly? A puppy with closed eyes that’s not eating much is experiencing an issue. If you see any of these symptoms it’s best to take the puppy to a veterinarian.

Is It a Good Idea for an Owner to Help Puppies Open Their Eyes?

No. A person should not try to force a puppy’s eyes open. This can lead to an eye injury, infection, or pain. An owner who touches the closed or partially closed eyes of a puppy is potentially adding dirt, dust, or other debris to the pet’s eyes. This can bring on bacterial growth or infection.

An owner should take the puppy to a qualified veterinarian to get the proper care. A veterinarian can determine the reason why the puppy’s eyes are not open and will know what to do about it.

Are There Any Other Senses a Newborn Puppy Lacks?

Yes. Puppies are born with closed eyes and ears. A puppy’s ears open after its eyes do. Sometimes it takes about three weeks for their ears to open. As a note, the development of a puppy’s hearing continues until it’s around eight weeks old. Because newborn puppies are blind and deaf they are dependent on their mother for everything until they reach a point in their development when they can survive on their own.

What Can You Do to Keep Your Puppies Safe Until They Open Their Eyes?

When it comes to the care and maintenance of a newborn puppy, the mama dog has most of it covered! She is there to feed her puppies, bathe them, and keep them warm while they sleep. A female dog who has just given birth to puppies has instincts that tell her how to care for her young. This is true for both domesticated and wild dogs.

One thing you can do to help with the maintenance of the puppies is to ensure they are in an enclosed area. A puppy with partially open eyes should not be allowed to get out of its enclosure until it can see clearly. A partially blind puppy can quickly get into a dangerous situation if it’s allowed to wander.

Don’t forget about the care and maintenance of the new mother. Be sure you allow her to leave the enclosure from time to time to relieve herself in the yard or go out to eat or drink. Chances are, she won’t want to leave her puppies for very long right after they are born. She’ll be very protective.

You may want to put her food and water bowls nearby, so she has easy access to them without going too far from her puppies. However, when she wants to leave the enclosure you can keep an eye on the puppies while she is stretching her legs and getting a breath of fresh air! 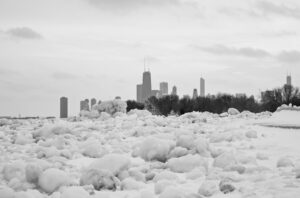