KPixMining/Shutterstock.com
Share this post on:
More Great Content:
What Kills Ticks On A Dog Instantly?
Bugs That Look Like Ticks, But Are…
Ticks in West Virginia
Tick Predators: What Eats Ticks?
Ticks in Idaho
Ticks in Virginia

In the spring and summer months, many people are eager to get out of the house and into nature. However, warmer weather brings more than humans to the great outdoors, it also kicks off the dreaded tick season. Apart from causing revulsion at the thought of finding a tick latched onto us or our beloved pets, ticks can be deadly. The biggest and most dangerous threat when it comes to ticks is Lyme disease. But which ticks carry Lyme disease?
The article below would give us more details.

In the United States, the Lyme disease-causing bacteria Borrelia burgdorferi and Borrelia mayonii are carried by the black-legged, or deer tick species. But how can you tell if a tick is a deer tick, and how can you prevent picking up one? And what are the warning signs and symptoms of Lyme disease? Let us get into it!

How To Identify Deer Ticks

The first step to minimizing the risk of contracting Lyme disease is knowing how to properly identify a deer tick. Some other species, such as the dog tick, can appear like the deer tick. However, the dog tick has white markings on its underside where the deer tick is a solid color. Adult deer ticks are the size of a sesame seed, with a shield-like scutum behind the head, reddish-brown lower bodies, black legs, and heads. Larval or nymph deer ticks are even smaller, the size of a poppy seed or even the head of a pin. Adult ticks have the expected eight legs that mark an arachnid, while larval ticks only have six.

While Lyme disease is always transmitted by the deer tick, not all deer ticks carry Lyme disease. Due to their small size compared to other tick species, visual detection is unreliable. According to the CDC, it takes 24-36 hours after a deer tick attaches to the host to transmit Lyme disease. It is usually not the tick you see that spreads the bacteria; it is the tick you do not. Therefore, the best way to detect Lyme disease is by looking for the warning signs of infection.

The first sign of a tick bite or removal is a small red bump. This is common for all tick bites and should resolve itself within a few days. Early symptoms that indicate Lyme disease occur within one month of being infected, and later signs may appear up to months after. Knowing the signs and symptoms of Lyme disease is crucial for your safety. Prompt treatment for Lyme disease will not only clear up the symptoms but can also save your life.

Lyme disease is commonly treated with antibiotics, the most common being doxycycline. However, the specific antibiotic depends on many factors such as known allergies and interactions with other medications. All medications taken for any illness should be prescribed by a healthcare professional. While antibiotics like doxycycline may be easy to obtain online, exact dosages depend on the individual. Improper dosage of antibiotics can cause resistance, ineffectiveness, illness, or even death in some cases.

When To See A Doctor

Only a small fraction of deer tick bites lead to Lyme disease. If the tick is attached for less than 36 hours, the risk is drastically minimized. However, the earlier you are diagnosed with Lyme disease, the more successful treatment will be. If you suspect you have been bitten by a deer tick, or exhibit any of the early signs or symptoms above, see your doctor as soon as possible. This is especially true for individuals that live in an area where deer ticks are common. Even if symptoms seem to disappear, seek medical attention, as Lyme disease can spread to other areas if left untreated. Also, Lyme disease is only one of the dangerous illnesses ticks transmit.

How To Prevent Picking Up A Tick Carrying Lyme Disease

Of course, the best tool to keep a tick from making us sick is by preventing them from attaching to us at all! Knowing where ticks live, how to repel them, and what to do if one is embedded in your dog, are all tools to protect you from all dangerous tick-related illnesses. In our article about how to get rid of ticks on your body and in your yard, we go into more detail. We also go over how to kill ticks on dogs, what ticks look like, and plenty of other ways to protect yourself and your pets in our other tick articles too!

How Long is the Tennessee River? 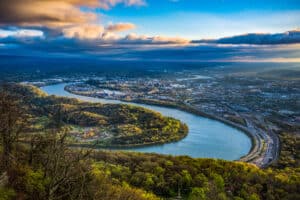