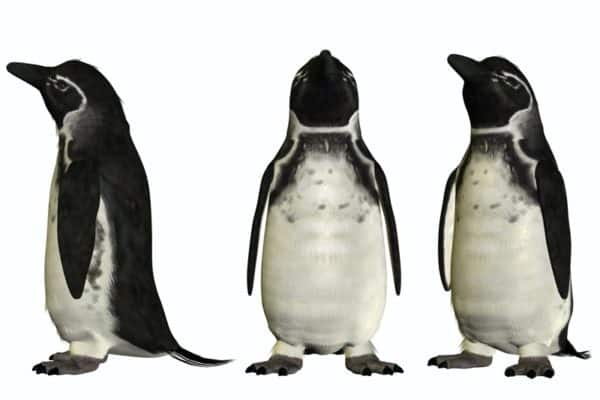 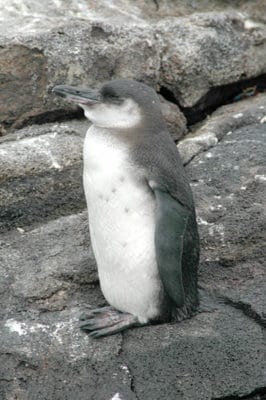 “The Galapagos penguin is located farther north than any other penguin species in the world.“

It is a very rare and unusual sight indeed: a penguin living in warm climates. Charles Darwin never saw these creatures on his trip to the Galapagos, but today they are a fascinating spectacle for visiting tourists and nature lovers coming to the island chain from around the world. However, population numbers are currently in sharp decline due to dropping food supplies and changes in the natural climate cycle. If something isn’t done to reverse their decline, then they may be vulnerable to complete extinction.

The scientific name of the Galapagos penguin is Sphensiscus mendiculus. The word mendiculus is a Latin term that roughly translates to squalid or little beggar. The first person to classify it was the Swedish zoologist Carl Jakob Sundevall in 1871, decades after Darwin’s famous voyage to the island.

The Galapagos penguin is only one of four living species of the banded penguin genus. The other three are the Magellanic penguin, the Humboldt penguin, and the African penguin, all of which inhabit the coasts of South America and Africa. They are named for the banded markings around their face and body. The family of Spheniscidae, as well as the entire order of Sphenisciformes, also includes every currently living species of penguins.

The Galapagos penguin is very much a quintessential member of the penguin family. It features the familiar black body and white belly that characterizes many species of penguin. One major difference in appearance is the curved stripe of white feathers along the sides of the head and the breast area. Other interesting colorations include the red eyes and the white and pink patches along the lower bill and throat area.

The Galapagos penguin measures about 20 inches in height and weighs 4 to 6 pounds. It is the second smallest penguin species in the world, beaten only by the little penguin of Australia and New Zealand. Males are slightly larger than females on average, but both sexes are similar in appearance.

The Galapagos penguin is specially adapted for a marine environment, where it spends a great deal of its time hunting and bathing. The eyes are modified to properly refract light in the water, and the ears are protected from the pressure changes by specialized organs. One glance at the wings will tell you that they are modified aerial organs that allow the penguin to glide effortlessly through the water.

Due to its awkward gait and poor balance, the penguin is just as clumsy on land as it is fast and agile in the water. That is one major reason why the center of the penguin’s social life is the colony. Characterized by loud squawking and constant movement, the colony provides protection and safety to all vulnerable members. The group also offers guaranteed hunting partners when in search of food.

Galapagos penguins communicate with each other through vocalizations and body movements. The calls help to maintain group cohesion in the colony and on the hunt. Despite their social nature, these penguins are highly territorial and will defend their nests from outside intruders. They have likewise adapted several antagonistic calls and movements to ward off unwanted visitors. This is somewhat analogous to the way that humans have formed both homes and larger communities. Penguins will welcome neighbors as long as they don’t get too close to the nest.

Because penguins are normally adapted to the cold, frigid environments of the extreme south, this species lives a rather fragile and precarious existence in the warmer climates of the Galapagos Islands. The high air temperature (which can reach into the 80s Fahrenheit) is a consistent problem for the penguin, but it has adapted several strategies to deal with this. For example, the penguin will spend a good deal of its time in the colder water to cool off. It will also spread out its flippers and hunch over to prevent the sun from shining on its feet. The featherless patch on the face provides some relief from the warm weather. If all else fails, this species has the ability to work off excess heat by panting.

As the name implies, the Galapagos penguin exclusively inhabits the Galapagos Islands, located to the west of Ecuador in South America. It is the only species located north of the Equator, but only the northern tip of the foremost island in the chain crosses the line. These penguins mostly stick to the rocky beaches of the coast, where the cold Cromwell Current and Humboldt Current meet up with the island chain to bring in an ample year-long food supply. Almost all of the penguins are located on the western end of the island chain.

The Galapagos penguins are carnivorous birds that feed almost exclusively on small sea creatures, including sardines, anchovies, mullets, and invertebrates, all of which are typically less than an inch in size. These penguins work in teams to chase prey into a desirable spot and then snatch the food from below with their sharp beaks. The sense of smell may also play a role in finding prey. Virtually none of its diet comes from land animals.

The greatest threat to this food supply is disruption from the El Niño cycle. These are unusually warm phases in the movement of ocean water throughout the Pacific. The warm water slows down the pace at which nutrients rise to the surface of the ocean, which causes fish stocks to decline. If the water warms too much, then the penguins may stop breeding altogether and even starve to death.

The small and plump Galapagos penguin faces numerous threats from voracious predators. When the penguin is swimming through the water, it could be eaten by sharks or Galapagos fur seals. The penguin’s coloration provides a good source of camouflage. When seen from above, the black underside blends in with the dark water below. When seen from below, the white stomach blends in with the light shallow water above. If this camouflage fails, then the speed and agility provide a good defense.

On land, the penguin faces a considerable threat from its longtime predator, the Galapagos hawk, which can swoop down at any time and kill the slow, awkwardly moving penguin. Introduced species like dogs, cats, rats, and other large birds have posed a new threat and destabilized otherwise stable penguin groups. The introduced species also carry diseases with them that can decimate native wildlife populations.

Humans don’t necessarily pose a direct threat to this species, but our actions may be contributing to their demise. Because of the changes wrought by the El Niño cycle, these penguins are highly vulnerable to slight disruptions in their food supply. This is exacerbated by the destruction of fish from pollution and overfishing. Another source of danger is the loss of natural nesting sites due to flooding and competition with other species.

The Galapagos penguin is a monogamous species that mates for life. The courtship process to secure a mate involves long and affectionate rituals such as preening, bill tapping, and flipper patting. These signs of affection continue even after they hook up to strengthen the pair’s bond for their remaining years together. The Galapagos penguin has no established breeding season. Although it can mate at anytime of the year, its decision to breed is usually dictated by the abundance of food and therefore the environmental conditions of the surrounding ocean.

After pairing up, the penguins will create a nest together out of rocks and twigs within small depressions along the shore. The nest provides protection for the young chicks against predators and the blistering heat of the sun. In order to copulate, the female lays down on the ground, while the male attempts to climb aboard. The entire process only lasts about a minute or two.

Once impregnated, the female penguin will produce three clutches of eggs throughout the year with two eggs per clutch. These eggs will hatch after about 38 to 42 days. Both parents share incubation, feeding, and protection duties, often alternating with each other between tasks.

The young chick starts out with gray, fluffy, downy feathers on the head and back, along with white patches on the stomach and cheeks. It takes about two months to fully fledge. This means they gain their full set of feathers. In penguins, of course, the feathers are not used for flight, but rather to help them swim and keep them warm in the cold water.

At around three to six months of age, the penguins will achieve independence from their parents. However, sexual maturity comes much later. Females will reach maturity after three to four years, while males take about four to six years to accomplish the same thing. The maximum lifespan in the wild is between 15 and 20 years of age, but predation or starvation may significantly reduce its potential life.

Due to years of decline, only about 1,200 Galapagos penguins currently remain in the wild. Almost all of these remaining penguins are clustered in a small stretch of territory along the coast of the island chain.

According to the IUCN Red List, the Galapagos penguin is currently an endangered species. The fate of this species was long neglected until the 21st century, when researchers finally sought to preserve it from extinction. Some of these conservation efforts have been directed toward building new nest sites and preventing the depletion of fish in the surrounding waters. A lot of the effort to save the species will depend on humanity’s effort to prevent climate change from raging out of control.

Where do Galapagos penguins live?

What do Galapagos penguins eat?

Galapagos penguins consume small fish and invertebrates in the surrounding waters close to the island shore.

Why are Galapagos penguins endangered?

Intensive climate events, overfishing, marine pollution, and habitat loss are the main reasons for the population decline of the Galapagos penguins. Because of its vulnerability to warm waters, the species is very prone to sudden decline from changes in the surrounding conditions of the Pacific Ocean. It is estimated that the intensity of the 1982 to 1983 El Niño event may have decimated Galapagos penguin numbers by more than 70%. Although this event is a natural phenomenon, climate change could make them more common and intense in the future, threatening what remains of the penguin colonies.

How many Galapagos penguins are left right now?

It is currently estimated that around 1,200 members of the species are left in the wild. Very few Galapagos penguins reside in captivity, so there is no backup stock in case the remaining wild penguins are lost.

How much does the Galapagos penguin weigh?

The Galapagos penguin only weighs about 4 to 6 pounds. This is less than the weight of an average house cat.