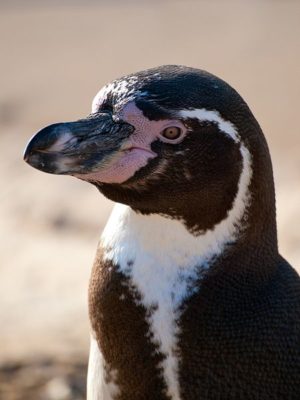 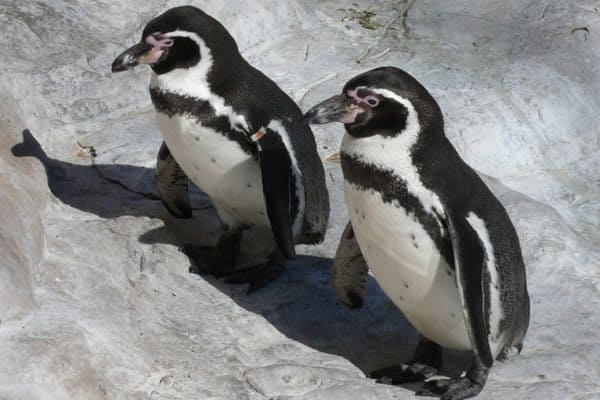 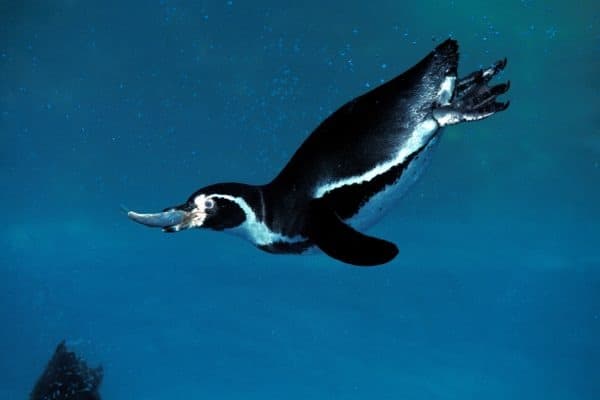 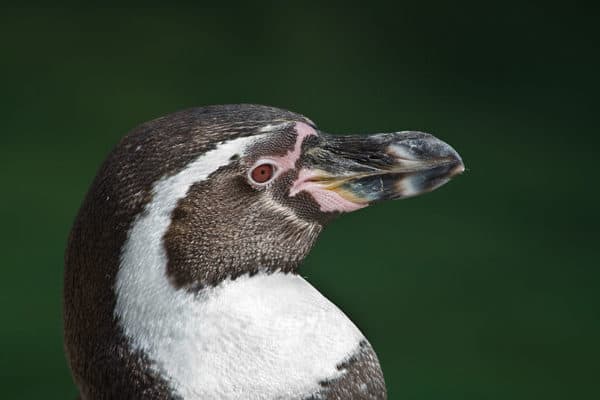 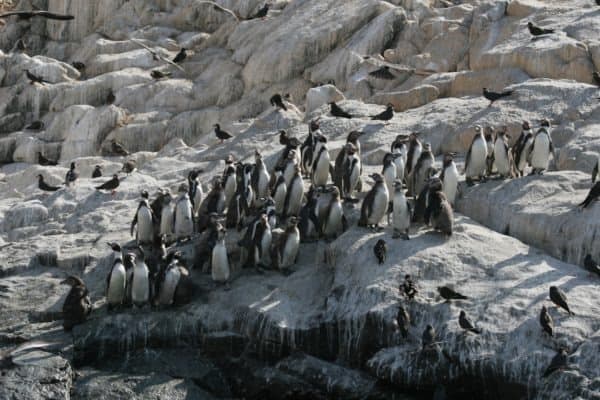 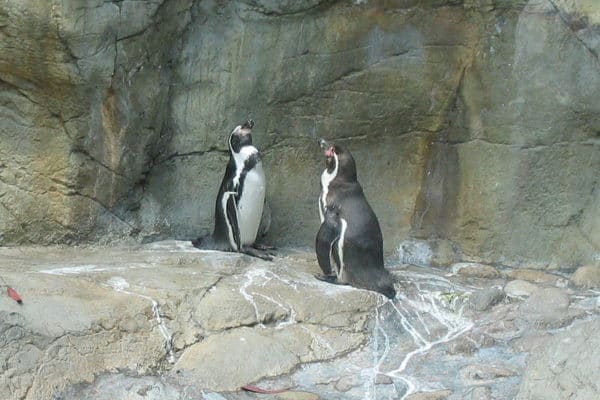 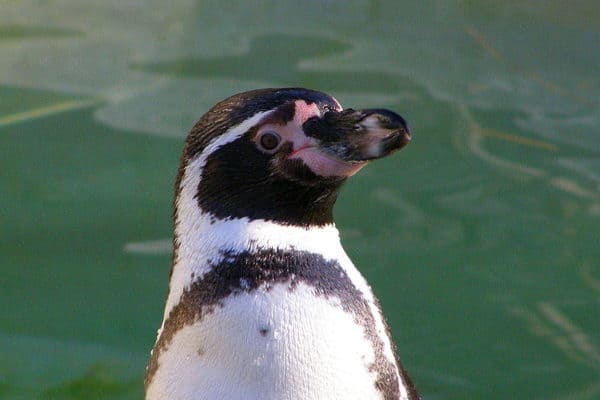 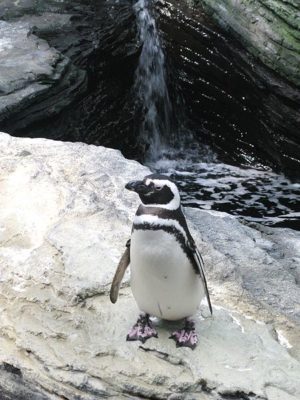 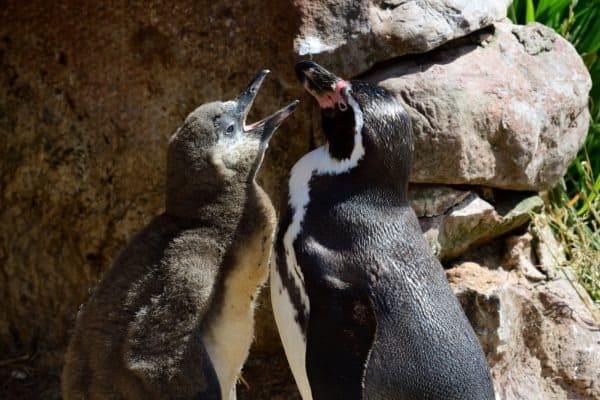 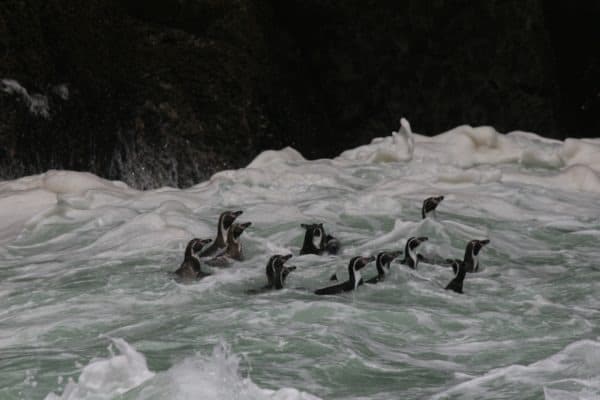 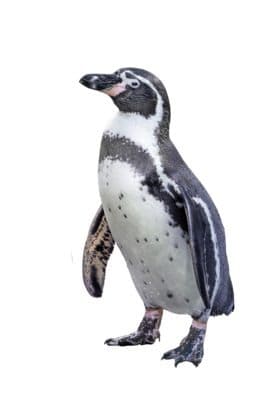 Capable of swimming up to 30 miles an hour, the Humboldt penguin is a very interesting bird. These penguins have a distinct black and white appearance with a black breast band. They live along the west coast of Chile and Peru near the Humboldt Current, for which they were named. Humboldt penguins are piscivores, a type of carnivore that eats fish.

The scientific name for the birds is Spheniscus humboldti. Spheniscus is derived from the Greek word, sphēniskos, meaning small wedge. This word refers to the shape of a penguin’s body. Humboldti refers to Alexander Van Humboldt who was a German naturalist and explorer. The sea current where the penguins live on South America’s west coast was named after Alexander Von Humboldt.

Like other penguins, they are black and white. This is one of the adptations that helps penguins camouflage and stay protected from their predators. Their heads have a white stripe that goes sideways from above their eye to around their ear. The stripes from both sides of their head meet at their throat. Adult birds have a black breast band with a white belly. They also have splotches of pink on their feet, face, and beneath their wings.

These penguins also have three layers of overlapping short feather and a thick layer of fat that work together to keep them dry and warm. These are other adptations that have helped the Humboldt penguins to survive in their habitat.

The adult penguins are about 28 inches long and weigh about 9 pounds, just less than the average weight of a domestic cat. The female penguins are typically a little smaller than their male counterparts.

Humboldt penguins are very social and prefer to be with others. They live in small groups known as rookeries.

Humboldt penguins live in the coastal areas of Peru and Chile. They can be found on rocky shores or on the islands in the area. Since they feed on fish in the Humboldt Current, they choose areas to live that are near this current.

The food of choice for a Humboldt Penguin is anchoveta, a small fish. In addition to anchoveta, they also eat sardines, krill, and squid.

In addition to predators in nature, humans also pose a threat to these penguins. Commercial fisherman fish in the areas where the penguins live, which reduces the number of fish that are available for the penguins. Humboldt penguins also die when they get tangled up in the fishing nets used by the fishermen. Humans also threaten their habitat when the harvest guano deposits to use for fertilizer. These penguins choose to nest in the guano deposits, so as the resources are depleted, there are fewer areas available for them to nest.

Climate change also threatens these bird. Rising temperatures in the arctic have started to decrease the amount of fish available in the Humboldt Current.

Because of all the threats that Humboldt penguins face, they face a risk of extinction. Their current conservation status is vulnerable.

Humboldt penguins find a lifelong mate, like other penguins. These penguins bow their head and use alternating eyes to exchange glances with penguins of the opposite sex during courtship. They stretch their heads up, flap their wings, and let out a loud call to try to attract a partner.

When baby penguins are born, they have grayish-brown feathers. At around the age of 70 to 90 days, the baby penguins will molt. At this time, their brown baby feathers are replaced with gray adult feathers. However, the young penguins still will not get their black breast band until they become an adult.

Until they have their adult feathers, the penguin chicks are unable to maintain their body temperature. They need to stay in their nest to keep warm, and their parents feed them by regurgitating food. One parent will stay with the chicks at the nest to keep them safe. After the chicks molt and get their adult feathers, they are able to leave the nest and begin looking for their own food.

Once Humboldt penguins are two years old, they are considered an adult. At this time, they return to the rookery to look for a mate.

The lifespan for most Humboldt penguins is about 20 years. Although, some of these penguins in captivity can live as long as 30 years. The oldest one lived to be 36. Her name was Emmanuelle, and she lived at the Akron Zoo in Ohio.

Humboldt Penguins in the Zoo

If you want to see these penguins in person, there are many zoos in the United States where you can do so. Some of these include the Saint Louis Zoo, Denver Zoo, Oregon Zoo, Akron Zoo, and Philadelphia Zoo

These penguins are carnivores, or piscivores since they eat fish.

How long do Humboldt penguins live?

What does the Humboldt penguin eat?

How tall is the Humboldt penguin?

The average height of a Humboldt penguin is 28 inches.

Why is the Humboldt penguin endangered?

Climate change is also threatening Humboldt penguins. The warmer water coming up the from the arctic is causing the number of fish to decrease, making it even harder for Humboldt penguins to find food.

In addition to these threats, Humboldt penguins are also eaten by predators like great white sharks, killer whales, sea lions, and leopard seals.

How did the Humboldt penguin get its name?

How many Humboldt penguins are left in the world?

There are about 12,000 breeding pairs of Humboldt penguins left in the world. About 8,000 of these pairs are located in Chile and about 4,000 are in Peru.

How fast can a Humboldt penguin swim?

Humboldt penguins use their wings to help them swim underwater. They are capable of reaching speeds up to 30 miles per hour.

How deep can Humboldt penguins dive?

Humboldt penguins can dive up to 30 meters deep. People have even recorded them diving as deep as 53 meters.