The smallest species of penguin! Click through all of our Little Penguin images in the gallery. 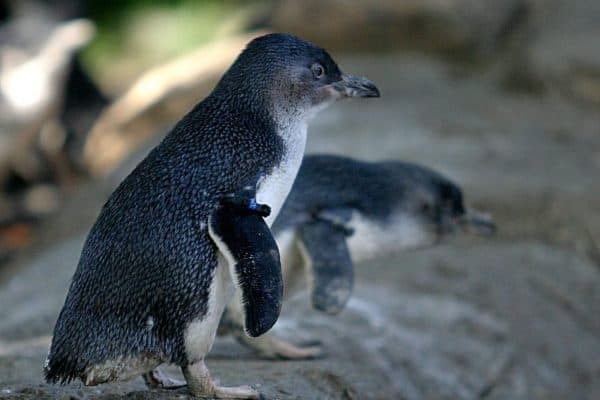 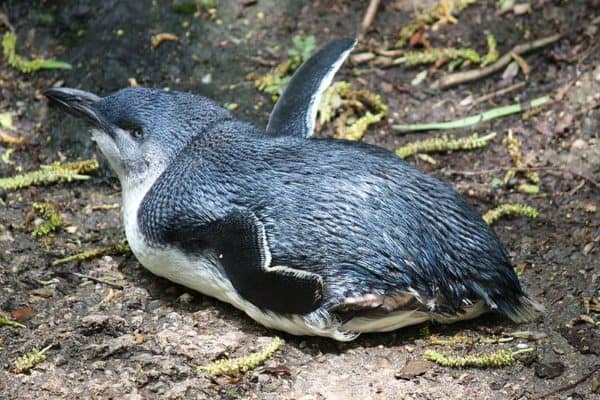 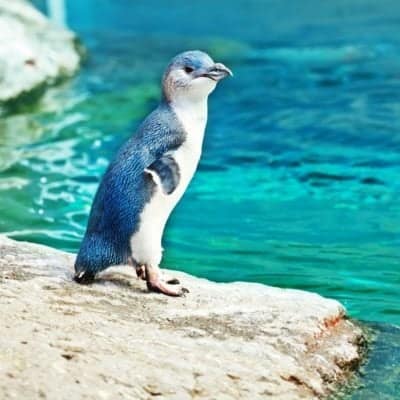 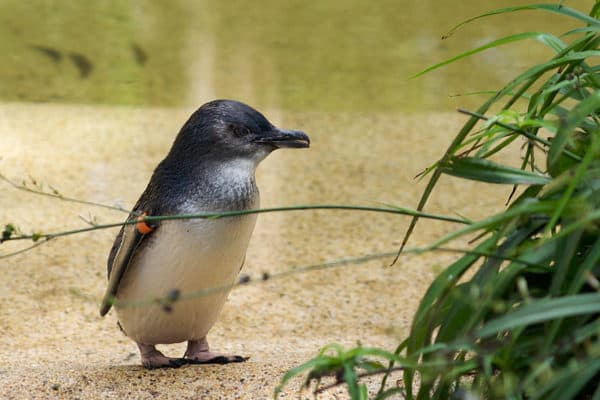 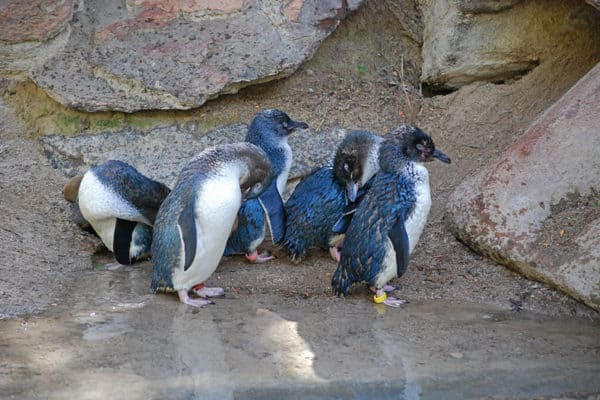 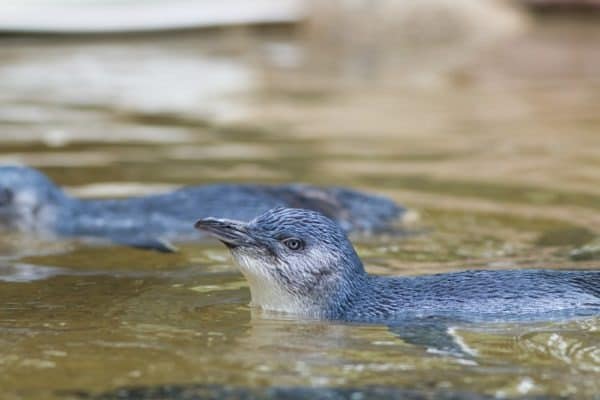 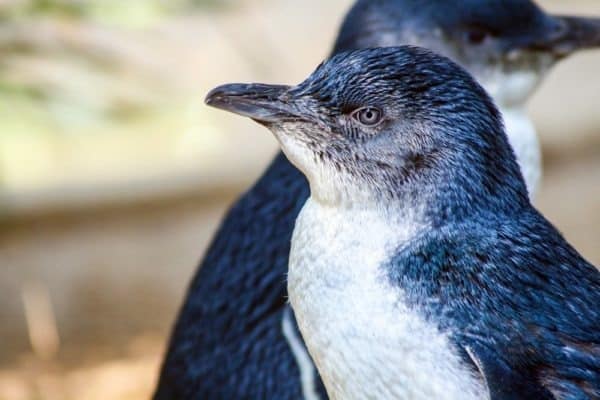 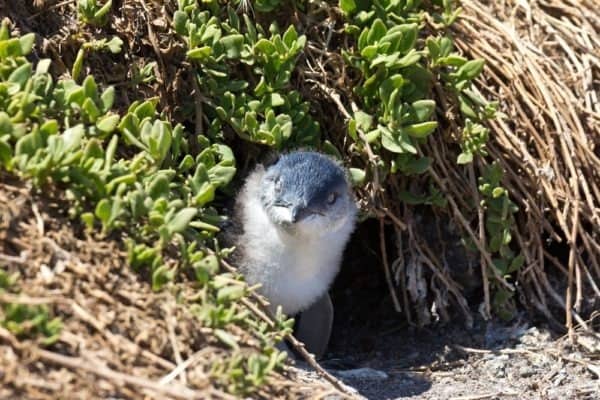 View all of the Little Penguin images!

Small fries of the Spheniscidae family, little penguins are native to Australia and New Zealand. Standouts in the penguin-sphere, they sport bright blue feathers and sometimes go by “fairy penguins.” Little penguins forage and frolic in ocean waters 80 percent of the time and can lay more than one clutch of eggs per breeding season.

Though these animals aren’t Endangered by IUCN Red List standards, their numbers are plummeting, and researchers are ringing alarm bells. Thankfully, conservation efforts are underway, and advocates of the flightless birds have successfully lobbied for little penguin protection laws.

The scientific name for these animals is Eudyptula minor. Eudyptula derives from Greek and means “good little diver.” Minor refers to the animal’s petite stature.

Some folks in Australia call them “fairy penguins,” whereas many Kiwis use “little blue penguins.” The native Māori word for little penguin is “kororā.”

As you may have guessed, in comparison to other Spheniscidae species, these animals are tiny. Exact measurements vary by subspecies and population, but generally speaking, their average height is 13 inches, and they weigh about 3.3 pounds — the same as a two-slice toaster.

Little penguin feathers are a vibrant cerulean blue. Slate-grey plumage covers their ears, and their undersides are white. Beaks typically reach between three and four centimeters long, and their black-soled feet are webbed.

How can you distinguish between females and males on sight? Notice the beak size: females have thinner ones.

As is the case with all species in the family, these animals are flightless birds — and their “wings” function as flippers.

Like humans, these animals are diurnal, meaning they’re most active during the day. They rise with the sun and immediately head out for a day of swimming and food foraging. At dusk, they return home to feed the chicks and sleep.

Little penguins are cooperative animals that groom each other. Specifically, they remove parasites from each other’s hard-to-reach places. As both hosts and predators of these minuscule critters, these animals play a vital role in their ecosystems.

Speaking of grooming, they spend lots of time preening their feathers with oils produced in a gland above their tails. The process helps keep their plumage waterproof. Additionally, once a year, colonies land themselves for about 17 days of molting. During this period, their old feathers fall off, and new ones emerge. The annual shedding is a critical part of their waterproofing physiology.

Little penguins also have glands above their eyes that filter salt from the sea.

When coming ashore, they work in groups. As a defensive strategy, they move from the water to land in ranks — like an army — and communicate with squeals and trills.

As their scientific name suggests, these animals are super divers and swimmers who spend 80 percent of their time doing both. On average, they swim two to four kilometers per hour, but researchers have clocked individuals speeding along at 6.4 kilometers per hour. Diving-wise, they can reach the seafloor, and the average plunge lasts 21 seconds. To date, the longest recorded little penguin dive was 90 seconds.

Not only are these animals great divers and swimmers, but they’re also impressive travelers who can migrate to far-off places. In 1984, researchers tracked one from Gabo Island to Victoria Harbor — a distance of 4,739 miles (7,628 kilometers)!

Little penguins primarily live in coastal New Zealand and island-studded southern Australia. People have claimed to see the species in Chile and South Africa, but experts are divided on the topic. Some believe the witnesses misidentified another animal; others think they may be vagrant populations introduced by humans. The debate is ongoing.

When they’re not in the water, fairy penguins live in coastal burrows. They’re always in sandy and rocky areas, and they make good use of caves, rock crevices, logs, and even man-made structures to build their homes.

Some breeding colonies are managed by conservation groups and operate as tourist destinations. If you go, though, stash your camera! Visitors can’t take pictures or videos of the little penguins because it stuns the animals and can even blind them.

These animals dine on a smorgasbord of small fish, including:

As a species, these animals are not endangered. However, individual populations face challenging obstacles. Due to climate change, human population growth, and pollution, experts are sounding alarms early and urging communities to support conservation efforts.

The natural predators of these animals include:

Cats, rats, and foxes aren’t natural penguin predators — nor are they endemic to the Antipodes. But since being introduced by humans, the three “intruders” have decimated regional penguin populations.

But there’s good news! And it’s all thanks to a chicken farmer named Swampy Marsh who suggested using sheepdogs to protect penguin colonies. At first, people ignored his idea. But when only six penguins remained near his home, the powers that be gave in and employed Mr. Marsh’s pups to scare away the foxes. It worked! Today, the sheepdog method is being used where non-native predators pose a threat to indigenous species.

Humans are also a huge hazard to these animals. For starters, the human population is skyrocketing. To frame the situation, approximately one billion people occupied the planet in 1800. In 2020, 7.8 billion of us walked the Earth.

Our growth, unfortunately, is demolishing hundreds of habitats. After all, people take up room! In Australia, new housing developments are encroaching on wildlife, and the whizzing of Skidoos and powerboats is driving penguin populations from their historical homes. Vehicle strikes, bycatch, plastic pollution, and land-management fires also pose big problems for the little penguins.

The breeding season is mainly dependent on location and ocean temperatures. Generally speaking, males start building and renovating burrows sometime between May and September for mating season. Their goal is to create the best nest to attract the top females.

Except in rare circumstances, partners remain monogamous for the breeding season. To mate, pairs typically isolate themselves or form small colony offshoots from the larger group.

The standard clutch consists of one to four eggs laid one to four days apart. At first, they weigh about .12 pounds (55 grams) — the same as four jellybeans — and grow larger over a 36-day incubation period. Female fairy penguins are capable of laying more than one clutch per season, but few do.

These animals return to the same breeding spots year after year — changing only occasionally.

Both parents help incubate and rear chicks. Once born, mom and dad work overtime to keep the nestlings warm and comfortable for 18 to 38 days. When a baby reaches 7 or 8 weeks old, their feathers grow in and fledge out on their own!

The average lifespan of these animals in the wild is about 6.5 years. Individuals living in captivity can make it to 20.

Experts place the worldwide population of these animals between 350,000 and 600,000. Some estimates go as high as 1,000,000. Resultantly, the International Union for the Conservation of Nature considers them an animal of Least Concern.

But that doesn’t tell the whole story.

Colonies in New Zealand have been steadily declining since the 1960s. Conservationists estimate a 70 percent downtown. Southern Australia and mainland Tasmanian populations are also struggling under the weight of human encroachment.

Thankfully, despite the absence of an IUCN alarm, both Australia and New Zealand have instituted laws addressing potential problems before it’s too late.

White-flippered penguins, which some scientists consider a little penguin subspecies, are considered endangered in New Zealand.

Many U.S. zoos care for these animals, including:

This list isn’t exhaustive. To find a zoo near you with a little penguin enclosure, head to Google!

What Is a Little Penguin?

Little penguins are the smallest species in the Spheniscidae — aka penguin — family. Unlike other penguins, they have bright blue feathers instead of black.

How Many Eggs Does a Little Penguin Lay?

Why Do Penguins Waddle?

Penguins waddle because they have big feet and short legs.

What Are Little Penguins Called?

Little penguins have lots of names. They answer to blue penguins, fairy penguins, and little blue penguins. A baby penguin is a chick or nestling. In the Māori language, it’s “kororā.”

Where Do Little Penguins Live?

Fairy penguins — aka little penguins — live in the coastal regions of New Zealand and southern Australia. They’re the only penguin species that breeds in mainland Australia. Sightings in Chile and South Africa have been reported, but many scientists dismiss the claims.

What Is a Group of Penguins Called?

A group of penguins at sea is called a raft; on land, it’s a waddle!

What Size Is a Little Penguin?

As their name implies, little penguins are the smallest penguin species. They weigh about 3.3 pounds; in terms of height, they reach 13 inches — just a little bit taller than a school ruler.

How Many Little Penguins Are Left in the World?

Conservationists estimate that there are somewhere between 350,000 and 1,000,000 little penguins left in the world. That may sound like a lot, but their numbers are declining. Very few breed on mainland Australia or New Zealand anymore and several populations are vulnerable.

Is the Little Penguin Endangered?

As a whole, little penguins are not endangered. However, individual populations are. In New Zealand, the mainland population has decreased by about 70 percent, and a handful of populations have gone extinct.

What Kingdom do Little Penguins belong to?

What phylum do Little Penguins belong to?

What class do Little Penguins belong to?

What family do Little Penguins belong to?

What order do Little Penguins belong to?

What genus do Little Penguins belong to?

What type of covering do Little Penguins have?

Little Penguins are covered in Feathers.

What is the main prey for Little Penguins?

What are some predators of Little Penguins?

What are some distinguishing features of Little Penguins?

What is an interesting fact about Little Penguins?

The Little Penguin is the smallest species of penguin!

What is the scientific name for the Little Penguin?

The scientific name for the Little Penguin is Eudyptula Minor.

What is the lifespan of a Little Penguin?

Little Penguins can live for 10 to 20 years.

What is the lifespan of a Little Penguin?

Little Penguins can live for 10 to 20 years.