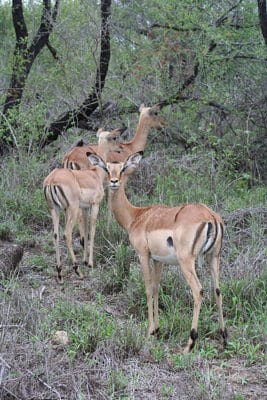 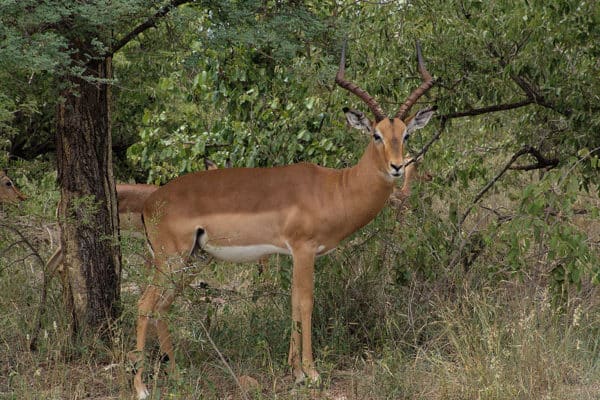 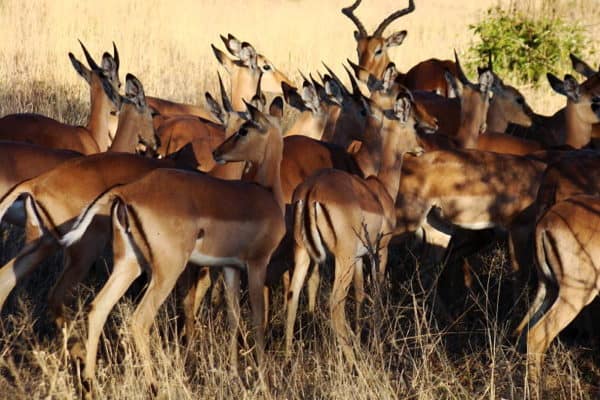 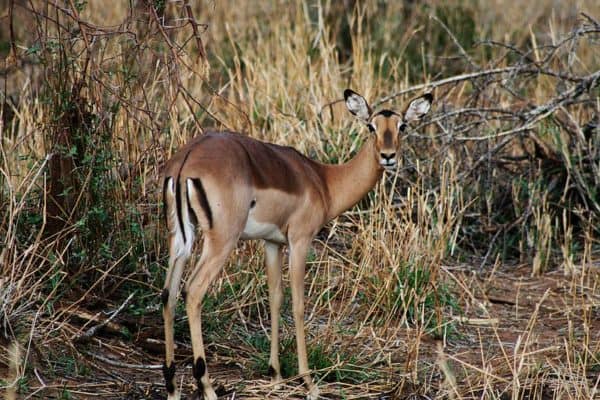 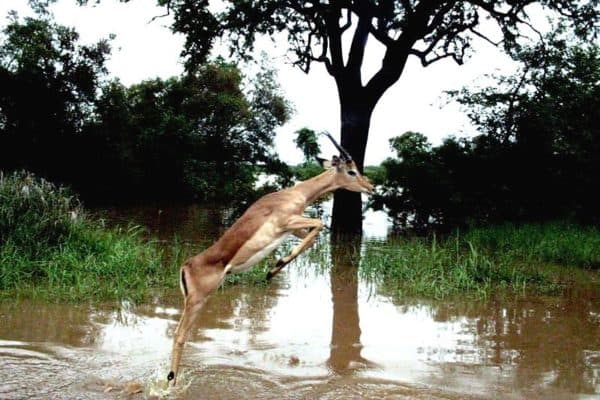 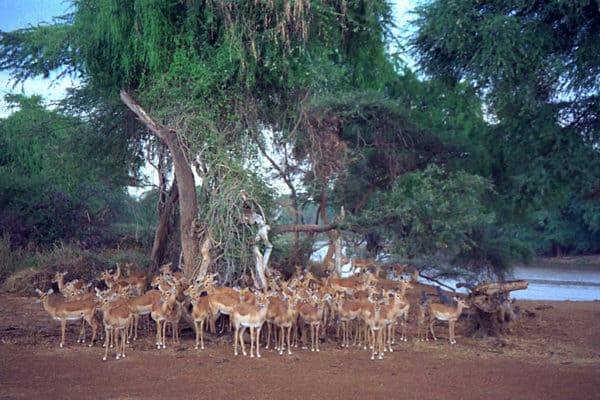 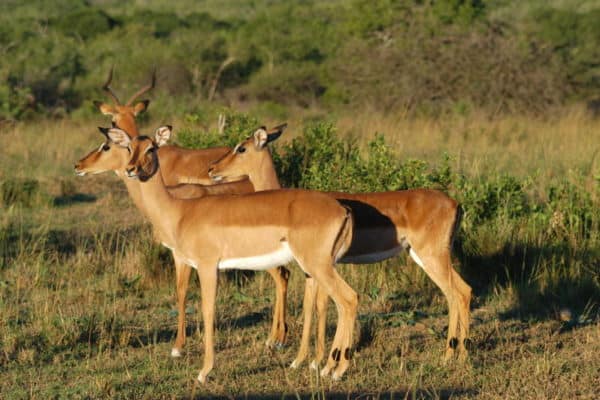 When startled, an impala animal can jump up to 10 feet high.

Impala live in the light woodlands and savanna of southern and eastern Africa. These medium-sized antelopes travel and gather in herds of hundreds during the rainy season. The rains bring a bounty of grasses, shoots, herbs, bushes and shrubs for their grazing. In the dry season, these herds work together to find food in a process called "browsing," as part of which they eat leaves, twigs and higher-growing vegetation.

Impala have the scientific name Aepyceros melampus. This name comes from Ancient Greek, with Aepyceros meaning "high horned" and melampus meaning "black foot." The common name impala is from the Zulu language.

Impala belong in the kingdom Animalia, phylum Chordata and class Mammalia. Along with cattle, antelopes, sheep, goats, buffalo and bison, they belong to the family Bovidae. All of these bovidae have hooves and horns. The horns differ from deer, however, in that they grow from the front of the animal's skull and do not shed or branch.

Impala have mostly red-brown fur that helps them hide among brush. But they feature white on their bellies, chins, lips, inner ears, eyebrows and tails. The tail and backside of the animal also feature a set of black stripes that form the letter "M." Otherwise, they have more black across their foreheads, thighs and ear tips.

Female impala, called ewes, have no horns. But males, the rams, grow curved horns with a notable twisted appearance due to ridges. These horns are black and grow as long as 36 inches.

Males measure between 30 and 36 inches tall from their hooves to their shoulders. Females grow to a smaller span of 28 to 33 inches. Their length from their head to the base of their tail is between 47 and 63 inches, for both genders. An impala tail adds between 12 and 18 inches more to their length. Weight is usually 88 to 99 pounds for females and 132 to 143 pounds for males.

Impala limbs are lengthy, slender and graceful with scent glands at the ankles. These legs help them leap up to 30 feet in length or up to 10 feet high.

Impala typically stick together in herds of 100 to 200 animals. For the dry season, these herds include both males and females working together to find food. When the wet season begins, the herd separates into a male herd and a female herd. These new groups graze on the plentiful grasses and other vegetation.

Impala prove highly adaptable herbivores. They change their diet according to what vegetation is available around them. They prefer to eat fresh grass. But they will then rely on many types of foliage, including herbs and shoots, when there is no grass. Other foods they eat include shrubs, bushes, fruits and acacia pods.

Much like your pet house cat, impala are picky about the water they drink. They prefer lake or river water, over murky ponds or puddles. But they can also eat enough green vegetation to keep themselves hydrated.

The primary predators of impala include stalking animals of lions, leopards, cheetahs, hyenas and wild dogs. But many also lose their lives to jackals, humans, eagles, hunting dogs and caracal. When the animal attempts to drink water from a river or they fail to pay attention, an impala can become a meal for a hungry Nile crocodile.

The captured impala is usually one that was absorbed by its own thoughts while grazing. They tend to stop paying attention to their surroundings when they are in low-lying brush, where many predators stalk and surprise them. When out in the open, they stay aware and act quickly to get away from danger.

Leaping upward is "pronking," a behavior that confuses impala animal predators. It can work on human hunters who then struggle to line up a shot on the fast and high jumper. When a predator comes near, all of the impala in the herd start pronking to create a confusing scene. If pronking fails to send the predators away, the impala scatter in all directions and hide in low brush and bushes. Besides this vertical leap of up to 10 feet in the air, impala can leap up to 30 feet outward and over bushes and other hurdles.

Besides signalling growth of abundant food for impala, the rainy season also signals time for males to compete for territory dominance. The single herd of the dry season separates into two herds, one male and one female group.

After separation, the most dominant males spray urine and feces to make their presence known and mark their land. Using their long, spindly horns, the males challenge each other to prove their strength. Some of the males find a territory and herd as many females as they can onto that territory. Once on their territory with a group of lured females, the dominant males mate while using their horns to threaten incoming rivals.

To attract females, dominant males engage in tongue flashing. This means they flash their tongues at the females who group together to walk through the male herd. Non-dominant males in the territory show their defiance to this scene by running away or flashing their own tongues stubbornly.

Males not succeeding in achieving herd dominance retreat to a bachelor herd. They can challenge rivals throughout the season. Of course, the younger, older and weaker males typically find themselves staying with the bachelors for grazing until the herd comes back together as one unit for the dry season.

After successful mating, females give birth to an approximately 11 pound fawn after about seven months of gestation. They can put birth off until month eight, if conditions are not right for the fawn's safety.

Most births are for only one baby. The mother and newborn fawn stay together in an isolated area for several days. The mother then leaves each day to be with the herd, returning to the fawn's den to nurse. Eventually, they both join the female herd and other offspring where the fawn nurses for four to six months before weaning.

Like humans going off to nursery school at a young age, weaned fawns live in a sub-group of the herd called a nursery group. When they mature at about one year of age, females from this group stay with the herd. But males must join a bachelor group.

Impala live for 12 to 15 years in the wild. But in captivity and without predators, drought or disease to contend with, many live beyond age 20.

The International Union for Conservation of Nature (IUCN) lists the impala as of the least concern, in regard to conservation. This means they are at low risk for extinction at this time.

About two million impala live in the wild or on private land today. About one quarter of these live in protected areas in Botswana, Kenya, South Africa, Tanzania, Zambia and Zimbabwe. The population remains stable with the exception of a black-faced subspecies of southwestern Angola and Kaokoland in northwestern Namibia, that currently includes only 1000 animals. To help that subspecies with black faces restore its population, some are being protected on private farms in Namibia and the Etosha National Park.

View all 13 animals that start with I

Is the impala an herbivore, omnivore, or carnivore?

Impala are herbivores with the ability to adapt their diet to their surroundings. They prefer soft, short grasses of the rainy season. They also eat leaves, bushes, fruit, acacia pods, herbs and succulents. But during the difficult times of the dry season, they browse. This means they change their diet to fit available plant life. If the impala cannot access a river or lake as a preferred drinking source, they often rely on succulent vegetation for its high water content. This keeps them hydrated until water becomes available.

How high can an impala jump?

An impala can jump as far as 30 feet outward and 10 feet high. This upward leap is called a pronk. Pronking, leaping over and over quickly, sometimes confuses a predator, such as a lion, leopard or cheetah. If a herd feels threatened by a predator, the whole group pronks at the same time. This creates a crazy, confusing scene that is a blur of reddish-brown and white fur coats.If the pronking does not frustrate the predator and convince them to leave, the impala scatter quickly. They run fast but cover most of the ground by leaping outward. They use that ability to leap up to 30 feet to clear many obstacles on the ground, such as plants, bushes, rocks and downed trees. Their jumping is one of their best lifesaving features.

How do impala protect themselves?

Male impala’s horns are their first mode of protection. These lengthy, spindly horns grow out of the top of their skull. Because their horns grow to up to three feet in length, the impala can defend its vulnerable body with great success. When a predator stalks a grazing herd, the outer circle of male impala stand with their heads down and horns pointed directly outward like medieval swords to hold their ground.When holding their ground does not work, or as another option, the group can pronk. Besides pronking, that repetitive vertical leap of up to 10 feet, running away proves a good defense tactic. A running impala leaps over anything and everything in its path, clearing over big boulders, small trees, ground vegetation, ravines and even other impala.In addition to running and leaping away at 30-foot paces, the impala uses a special backward kick to confuse its predator. Mid-leap as they run to safety, the impala kicks its hind legs out before landing on all four feet. They repeat the running outward leap, hind leg kick and landing cycle until they reach safety or the bewildered predator gives up.