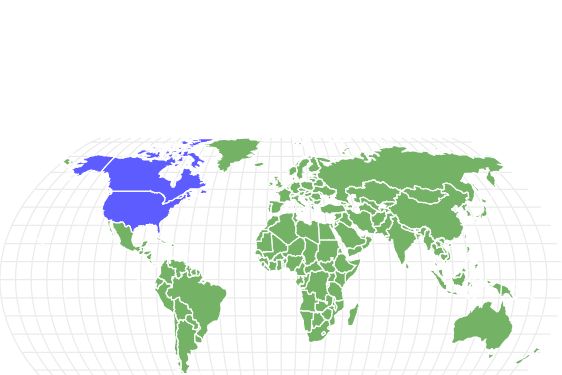 View all of our American Dog Tick pictures in the gallery.

View all of the American Dog Tick images!

“The American dog tick is the primary vector of Rocky Mountain spotted fever.”

Ticks may be one of the most reviled insects on the planet. Their reputation is not unwarranted either; the American dog tick is responsible for more cases of Rocky Mountain spotted fever than any other insect. American dog ticks are also known simply as dog ticks because of their predilection for parasitizing our canine companions. But, that doesn’t mean these ticks only bite dogs—they’ll bite just about any moving, warm-blooded creature, including humans.

American dog ticks are found across North America. They’re most active in the spring and summer months; most go into a dormant state for the winter. Like most species of tick, they can go months without feeding on blood, though they are vulnerable to dehydration in dry climates. American dog ticks are one of the most common problem tick species in North America, mostly because they tend to hang out near trails, and places where humans and dogs hike.

The scientific name for the American dog tick is Dermacentor variabilis. They’re members of the hard-bodied Ixodidae family of ticks, along with about 700 other known species. American dog ticks are also frequently called dog ticks, or even wood ticks. They’re closely related to other common types of tick, like the deer tick, brown dog tick, and lone star tick.

No matter the species, all ticks have the same basic anatomy. In hard-bodied ticks, the head and mouthparts are located at the front of the body, followed by a hard shield called a scutum. In adults, eight legs are attached to the round or oval abdomen. American dog ticks have short, wide heads, and ovoid abdomens covered in whitish markings.

American dog tick larvae are a pale brown color, with only six legs. After their first molting, they become nymphs with eight legs. Nymphs are slightly more brown in color and have long, narrow bodies that are fatter at the rear end than at the head.

As adults, the dog ticks take on a rich, mahogany brown color. Females have brown abdomens and tan scutum. Males have mottled scutum and abdomens; their markings range between red-brown and tan.

The tick’s head, known as a capitulum, includes the various mouthparts. Each American dog tick comes equipped with chelicerae (jaws), and a tubular organ called a hypostome. The chelicerae cut into the victim’s skin, while the hypostome inserts into the hole, anchoring the tick to the host for the duration of the feeding.

Scientists characterize tick species by how many hosts they take in their life cycle; American dog ticks are three-host ticks. This means that they usually take three hosts in their lifetime, one for each life stage.

Female ticks lay clusters of thousands of eggs, usually somewhere on the ground, under bushes or grass. This happens in the springtime, and by early summer a brand new crop of tick larvae emerges.

American dog tick larvae often climb to the ends of short pieces of grass or forbs to wait for a passing mouse or other small mammals. They extend their foremost pair of arms in a behavior called ‘questing’. When the mouse walks by, the extended legs grab on, and the tick climbs onto the new host. After drinking its fill of blood, the larva drops off and begins the molting process.

After several days, the larva emerges as an eight-legged nymph. The nymph is able to feed on slightly larger prey, ranging from raccoons to dogs to humans. Nymphs have eight legs, but they don’t yet have their adult coloring, and they’re not sexually mature. In order to become adults, they must feed once again. Once they’ve done that, they drop off, molt, and emerge as adult American dog ticks. They can live anywhere from a few months to a few years.

American dog ticks can be found throughout North America, particularly in the eastern United States, and along the Pacific Coast from California to Alaska. Unlike their cousins, deer ticks, they’re not likely to be found in forests. American dog ticks are much more common in fields, shrublands, and second-growth forests. They’re also commonly found along walking and hiking trails, where they have a good chance of attaching to a human or pet.

American dog ticks are obligate hematophages; they consume blood, and nothing else. Ticks are specially evolved to subsist on nothing but blood; females consume massive amounts in order to produce eggs. Dog ticks aren’t too particular about where the blood comes from either, though the younger ticks are limited in the size of host they can attach to.

Larval and nymph-aged American dog ticks generally feed on small creatures like mice, rats, lizards, birds, raccoons, and opossums. Adults have no restrictions on the size of their prey; they’ve even been known to feed off of cattle and sheep. If they occur in areas frequented by humans, they target people like any other blood-bearing potential host.

What Eats the American Dog Tick?

When they’re young, American dog ticks are mainly eaten by other small insects like mites and nematodes. As they get bigger, they’re often preyed on by birds, spiders, frogs, toads, and lizards. One of their biggest predators is actually the opossum, but not because opossums hunt them down. Rather, opossums are obsessive groomers and end up eating lots of ticks that mistakenly try to feed off of them.

What to do if an American Dog Tick Bites You

The best way to avoid you or your pet coming into contact with an American dog tick is to stay inside during peak tick season, from early summer to fall. However, if you don’t want to hide out indoors all summer, be sure to wear long sleeves, long pants, and long socks anytime you hike in tick-infested areas. If you do find a tick on you, your friend, or your dog, don’t panic. The best course of action is to remove it as soon as possible using tweezers or a tick-pulling tool. To remove the tick, simply grasp it at the point of attachment, then slowly but firmly pull it out. Clean the area with alcohol or hot soapy water—hand sanitizer will work too. Then, monitor the area over the next few days. If you develop a rash, headaches, fever, or muscle aches, seek medical advice. 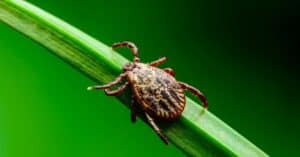