Click through all of our Boxer Dog images in the gallery. 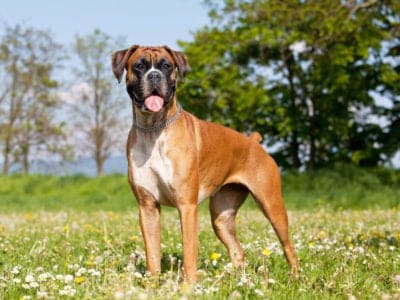 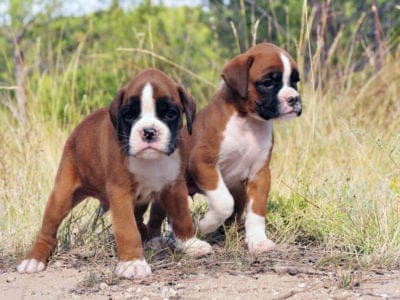 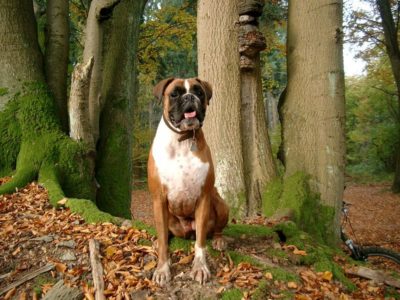 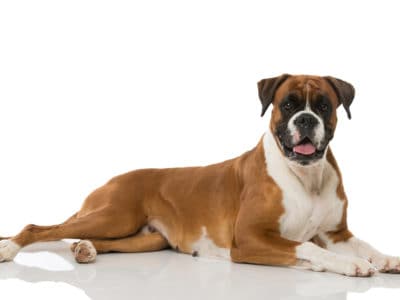 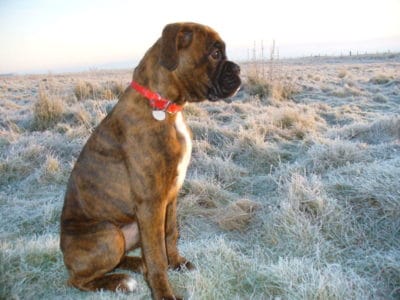 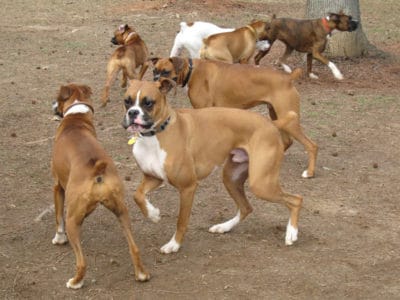 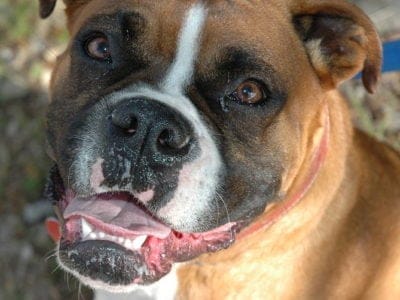 View all of the Boxer Dog images!

Boxers are a medium- to large-breed of a dog. They have a short coat that is either fawn, white, or brindled in color. Some Boxers also have white markings on their coat. Their jaws are quite strong, which helped them hold on to prey.

Boxers are an intelligent breed that can be trained relatively easily. Historically, they have been used as military dogs, police dogs, and service dogs.

The Boxer is a very active and energetic dog breed. However, when they are given enough exercise, they can also be very gentle and loving, making them a great addition to a family. They were registered as a breed by the American Kennel Club in 1904. According to American Kennel Club, the Boxers was the seventh most popular dog breed in 2013.

3 Pros and Cons of Owning a Boxer

If you plan on bringing a Boxer home, there are a few common health concerns you should be aware of. One problem to be aware of degenerative myelopathy. This is a condition that cause problems with a dog’s nervous system and spinal cord. Unfortunately, there is no treatment for this condition, and it will eventually lead to either full or partial paralysis of a Boxer’s lower limbs. If you notice that your dog is having difficulty walking or other symptoms, be sure to schedule an appointment with their vet right away.

Health and Entertainment for your Boxer Dog

Cardiomyopathy is another condition that Boxers may suffer from. Boxers are more at risk for this disorder than other dog breeds because of their genes. Boxers with Cardiomyopathy will have an irregular heartbeat and may faint. Their hearts are not able to effectively pump blood to all the different parts of their body. You may begin to notice symptoms of this disease when your dog is about two years old.

As a large dog, Boxers may also suffer from Bloat. Bloat is a gastric disorder that causes the dog’s gastrointestinal system to swell. This prevents them from being able to digest their food and can be very serious if not treated immediately. Bloat often occurs after a dog eats a large meal and then is very active, so you should feed your dog smaller meals and hold off on exercising right after they have eaten.

To review, here are some of the common health problems that Boxers face:

Boxers have a very fun-loving temperament. They are intelligent dogs who exhibit both playful and gentle traits. These characteristics make the Boxer a great family dog, especially for families with older children.

Boxers are very active and do require a good amount of exercise, but when their activity needs are met, they aren’t very likely to engage in destructive behaviors or get into too much trouble. Boxers also exhibit protective traits and try to watch out for the members of their family.

How to Take Care of a Boxer

Boxers are a very unique dog breed and, as such, will require a unique care plan. You’ll want to keep the temperament, nutritional needs, common health concerns, and other factors in mind when you plan for how you’ll care for your new Boxer.

When selecting food for your Boxer, it is important to choose a high-quality option that will meet their nutritional needs. You will want to be sure to portion out their food and give them the correct amount each day. Boxers should not be left to eat freely since they will overeat. Because of this, you will also want to break up their food each day into two or three servings. The right amount of food for your Boxer will vary based on his weight, age, activity level, and health concerns. You can always consult your veterinarian if you’re not sure how much they should be eating.

Your Boxer puppy will need to eat frequent, smaller meals throughout the day. This will prevent him from overeating or suffering from bloat. Young puppies should be given a mix of puppy food and water at least four times a day. As they get older, you should reduce the amount of water in the mixture so eventually they are eating straight puppy food (by the time they are about 7 weeks old). At eight weeks, Boxer puppies should be completely weened from their mother and should eat about two cups of food each day. Since Boxer puppies are so active and are growing so quickly, they may eat up to twice as much as an adult boxer will.

Boxers are much easier to maintain and groom than many other dog breeds. They have a short coat that doesn’t shed too much. You should try to brush your dog using a hound glove or curry-brush a few times a week to keep him looking good.

It will also be important to brush his teeth regularly to keep tartar from building up. Brushing once a day is ideal. You will also want to trim your Boxer’s nails about once a month to keep them from getting too long and making it uncomfortable for him to walk.

Since Boxers are such an energetic breed, it will be important to begin training them from a young age. Look for opportunities to socialize your new dog and sign them up for puppy obedience training classes shortly after bringing him home. In general, Boxers can be relatively easy to train. They are very intelligent and can do well with herding, agility, and other canine sports.

However, Boxers may become bored with repetition. They are also not very accepting of other dogs of the same sex. These two characteristics could make it a little more challenging to train your dog.

If you are going to be bringing home a Boxer puppy, be sure to puppy-proof your home before doing so. This will prevent an accidental injury for your new pup and can help make sure that something that is special to you doesn’t get destroyed. If your Boxer puppy hasn’t been potty-trained, you’ll want to get started with that right away. Be sure to set up a consistent schedule for your dog and look for signs that they are about to go so you can take them outside.

Some other important things to keep in mind when caring for a Boxer puppy include getting them to the veterinarian for a check up and vaccinations once you bring them home, making sure you have purchased all the necessary supplies and food you’ll need for your new dog, and finding plenty of time to play with them and meet their activity needs.

Boxers are very patient and loving dogs. They can make a great addition to a family with young children. However, because they are so energetic and like to leap, they may inadvertently injure a small child (or an older adult), so they are best suited for homes where the children are a little older. Regardless of the age of the child, it is always a good idea to supervise children around Boxers and other dogs to prevent any accidental injuries.

Bulldogs, Dogo Argentinos, and American Staffordshire Terriers are three breeds that are similar to the Boxer

As a very popular dog breed, there are plenty of boxers who have famous owners. Here are a few:

Here are a few names you could consider for your pet Boxer.

How much does Boxer cost to own?

The average cost of buying a Boxer puppy from a breeder is just under $900, but they could cost anywhere from $500 to $1,500 a year. If you adopt a Boxer from a rescue organization or a shelter, it will likely cost a couple of hundred dollars for the paperwork and vaccinations.

In addition to the cost of purchasing or adopting your new Boxer, you will also want to plan for the additional expenses of owning the dog. Your first year as a dog owner could cost $2,000 or more when you factor in medical expenses, food, toys, supplies, and everything else your dog will need. You should budget to spend around $1,000 to $1,500 for every other year you own your dog, but this amount may vary.

How long does Boxer live?

The average life expectancy for a boxer is 10 to 12 years.

Boxers are a large-sized dog breed. They were bred in Germany from the Old English Bulldog and the now extinct Bullenbeisser. Boxers are square-jawed and well-built. A Boxer’s coat is smooth and their hair is short. They may be brindled, white, or fawn in color. Some boxers also have white markings. The area around their mouth is typically black.

Yes, Boxers are a good family dog. They are loving, gentle, and enjoy playing. Because of their playful demeanor and larger size, though, they may not be the best dog for a family that still has small children. The Boxer could accidentally injure the child jumping up and wanting to play.

No, Boxers are not a dangerous dog breed. While they are very active and playful, they are also very gentle and loving. They look for a lot of attention from the people in their family and can be stubborn at times, but they are not inherently dangerous.

A Boxer may look a bit intimidating due to their square-jawed appearance and large size, but they are not known to be aggressive. It is important to note that a Boxer may get a bit carried away when they are playing a game, so it is best not to play anything aggressive with your Boxer.

Are Boxers easy to train?

Yes, Boxers are relatively easy to train. They are very intelligent, which can aid in the training process. However, Boxers can become bored with too much repetition, so you should keep this in mind when training your dog. This breed tends to do best with positive reinforcement, so look for training options that are more positive.

What are Boxer dogs known for?

Boxers are known for their very distinct appearance. They have a black square-jawed face and may be brindled, fawn, or white in color.

Boxers are also often used as a service dog or a police dog. The American military has even used this breed as a messenger dog, guard dog, attack dog, or pack carrier at different times in history.

Boxer Dogs are Omnivores, meaning they eat both plants and other animals.

What Kingdom do Boxer Dogs belong to?

What class do Boxer Dogs belong to?

What phylum to Boxer Dogs belong to?

What family do Boxer Dogs belong to?

What order do Boxer Dogs belong to?

What genus do Boxer Dogs belong to?

What type of covering do Boxer Dogs have?

Boxer Dogs are covered in Hair.

How many babies do Boxer Dogs have?

The average number of babies a Boxer Dog has is 8.

What is an interesting fact about Boxer Dogs?

What is the scientific name for the Boxer Dog?

The scientific name for the Boxer Dog is Canis lupus.