Brookesia micra can curl up and pretend to be a dead leaf if it’s threatened.

Click through all of our Brookesia Micra images in the gallery. 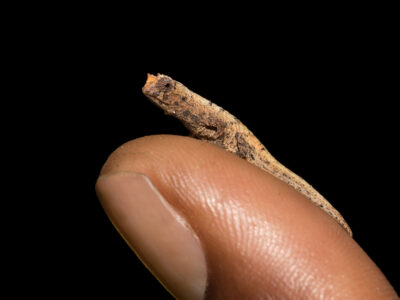 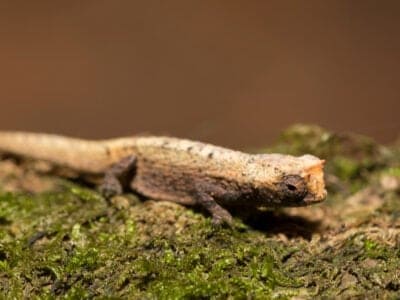 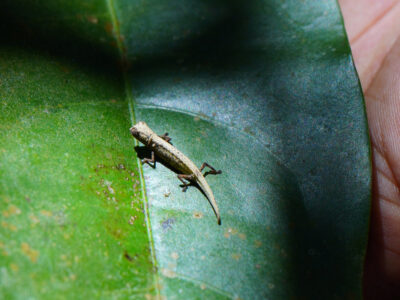 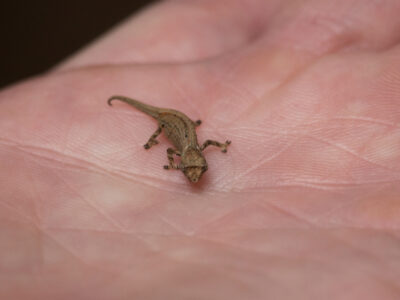 View all of the Brookesia Micra images!

“One of the world’s tiniest chameleons!”

Part of a group of tiny chameleons that live only on an island off the coast of Madagascar, the Brookesia Micra was, until recently, thought to be the tiniest chameleon on earth and one of the smallest of the reptiles in general. It may be surpassed by a relative called Brookesia nana, but only two specimens of that species have been found, and scientists don’t even know if they were looking at adults or babies. Discovered as recently as 2012, scientists don’t know much about Brookesia Micra, but what they do know is fascinating. Read on to learn more facts about this little chameleon.

Here are five facts about the Brookesia Micra:

Brookesia Micra’s scientific name is the same as its common name. Brookesia comes from Joshua Brookes, the British naturalist. Micra is a Latinized form of the Greek word mikros, which means “tiny.” The pronunciation of Micra is MIKra and not MYkra, by the way.

This tiny reptile is only about an inch long from nose to tail with a weight that is less than a penny. Male and female chameleons seem to be the same size and are both leaf brown with an orange tail. Besides the tail, which is stumpy and helps the animal climb, it looks like a regular chameleon. It has turret-like eyes that can move independently of each other, can see both ultraviolet and visible light, and can see even tiny insects at a long distance.

The chameleon has five toes on each foot. The toes are grouped in twos or threes, and each has a claw that helps with climbing. The Brookesia Micra also has the hunched back seen in other chameleons but has no crest or spikes along its spine. It seems like the price of becoming smaller and smaller was to lose much of the ornamentation found on larger chameleons.

The Brookesia Micra is also different from other chameleons in that the structures of its inner ear resemble that of a turtle more than it does a chameleon. This is probably to help with the reptile’s stability and sense of balance. But like other chameleons, the Brookesia Micra feeds by projecting its tongue to catch its prey. As a small chameleon, it can project its tongue twice the length of its body and snap up prey in a fraction of a second.

During the day the Brookesia Micra is found in the leaf litter in the dry, karst forest of Nosy Hara, a tiny island off the coast of Madagascar. The leaf litter is where it hunts for prey. At night it climbs into a tree at the height of about four inches. When it’s disturbed, the chameleon can imitate a dead leaf, vibrate, or let go of its perch and drop. To escape the heat, bad weather, and predation, the reptile might also hide in one of the many crevices found in the karst of its habitat.

Nosy Hara is an island made largely of karst, a type of limestone. It’s called tsingy in the native tongue. The climate is warm year-round, with a rainy season that begins in December and ends in March. The wettest month is January, where it rains 17 days out of 31. The Brookesia Micra is a ground chameleon that moves about the duff on the forest floor during the day, hides in crevices to escape predation, heat, and bad weather, and climbs a few inches into the trees to rest during the night.

This tiny lizard eats tiny invertebrates such as fruit flies, ants, and whiteflies.

Brookesia Micra is not poisonous to other animals nor is it venomous, and its tiny size makes it vulnerable to predators such as larger chameleons like the cat-sized Parson’s chameleon, frogs, birds such as the Malagasy coucal, and whatever small mammals share its island home.

Though the island of Nosy Hara is a wildlife refuge and its flora and fauna are protected, the Brookesia Micra is still listed as near threatened because trees are still poached on the island.

What eats the Brookesia Micra?

What does the Brookesia Micra eat?

Scientists do not know much about the mating habits of Brookesia Micra. They assume that fertilization is internal. After mating, the female digs a hole where she will lay at least one but no more than two eggs. The eggs are enormous compared to the size of the female. After the eggs are laid, the female covers them up then leaves them to their fate. The eggs hatch after about three months, and the babies are independent. A captive Brookesia Micra can have a 10-year lifespan, but scientists still don’t know how long they live in the wild.

Scientists believe that the population of Brookesia Micra is between 75,000 and 90,000 individuals. Though this seems healthy, the chameleon is so well adapted to its habitat that any serious disruption of it can endanger the species.

The Brookesia Micra is a carnivore, specifically an insectivore.

xWhen was the juvenile B. micra discovered?

B. micra was discovered around 2012 by a team of American and German scientists.

Where can I buy a B. micra chameleon?

How much does the B. micra weigh?

How do I pronounce Brookesia micra?

The pronunciation of Brookesia micra is Brook ee zhia MIKra.

How long do B. micra chameleons live?

These chameleons seem to have a lifespan of about 10 years in captivity, but no one’s really sure how long they live in the wild.

What is the B. micra's size?

This chameleon is a little over an inch long, including its tail.

Can the B. micra change color?

B.micra can change color, especially if it’s under stress. A stressed chameleon turns dark brown with a pale stripe down its back.