Cascabels rely on their camouflage first, and rattle if that doesn't work. 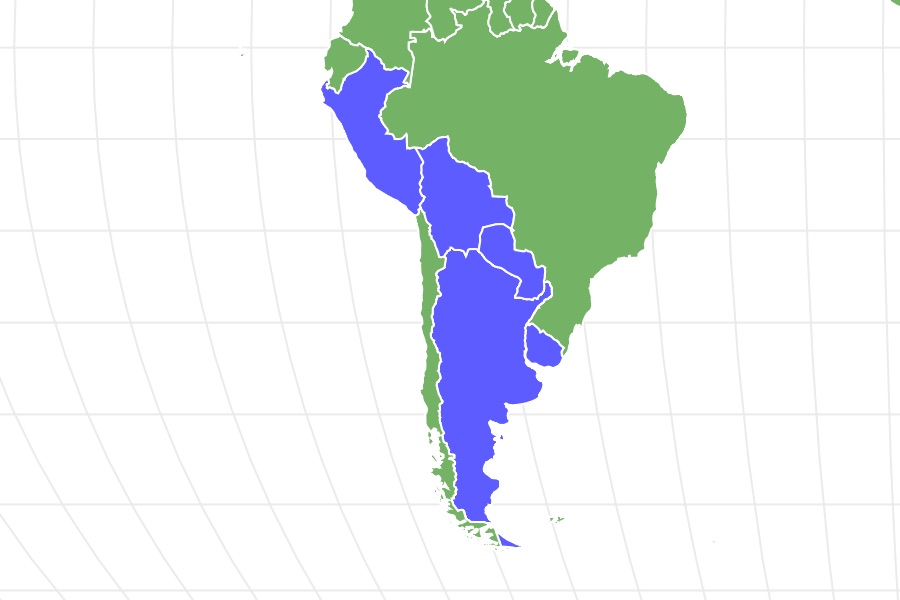 View all of our Cascabel pictures in the gallery.

View all of the Cascabel images!

“The rattlesnake of the tropics”

Oddly beautiful with its bead-like scales and diamond patterns, the cascabel is the only rattlesnake in much of its range and is the most widely distributed of all the rattlesnakes. It’s also known for the potency of its venom. Read on to learn more about this aesthetically pleasing pit viper.

Five Amazing Facts About the Cascabel

Here are five facts about this impressive snake.

1. Crotamine, which is developed from C. durissus terrificus is 30 times more potent as a painkiller than morphine.
2. The cascabel the only rattlesnake that’s found nearly everywhere in Central and South America.
3. A large cascabel can have fangs that are 4 to 6 inches long.
4. Found in the snake’s jaws, the venom glands are so large that they give the cascabel’s head a triangular shape.
5. Baby cascabels are born with working venom. In fact, their venom is more powerful than their mother’s. There’s just less of it.

Cascabels are found in Central America and South America, and they are the only rattlesnakes found throughout these two areas of the world. Cascabels have also been found on Caribbean islands such as Aruba. They prefer to live in dry lowlands, scrublands, savannas and on drier mountain slopes.

The cascabel’s scientific name is Crotalus durissus. Crotalus comes from krótalοn, a Greek word that means “rattle” and refers to the rattle on the end of the snake’s tail. Durissus comes from Latin words meaning “very hard” or “very tough” which may refer to the scales on the snake’s back. Cascabel is a Spanish word for “rattle.”

The Different Types of Cascabel

Of all the snakes found in the Crotalus genus, the cascabel is the most widely distributed. Though scientists don’t know its exact numbers, the IUCN REDLIST lists its conservation status as least concern.

How To Identify Cascabel: Appearance and Description

The cascabel is a large, thick-bodied rattlesnake that is often about 5 feet in length but has been known to grow to over 6 feet. On average it weighs about 2.6 pounds. It has stripes on its head and an attractive rhomboid or diamond pattern on its body, with 27 rows of scales in the middle of its back. The scales on the top and sides of the snake’s body have the look of fancy beadwork, and the snake has a ridge along its spine that’s more pronounced near the tail.

The snake’s ground color can range from shades of brown to shades of gray, including green-gray or blue-gray, and black. Besides the stripes on the head, there’s a brown bar at the flat top of the head, and the belly is pale and stippled with gray spots that darken near the tail. The snake’s tail is gray and marked with fuzzy crossbands. The eyes have vertical pupils, and the rattles are shaped differently than the rattles of northern rattlesnakes.

When the snake closes its mouth, its long fangs are folded against the roof of its mouth. When it opens the mouth to strike, the fangs spring forward. The cascabel’s main prey is rodents though they’ll also take racerunner lizards.

Cascabel Venom: How Dangerous Are They?

Cascabel venom is considerably more dangerous than the venom of rattlesnakes found further north. However, the snake is not aggressive and would rather flee than stand its ground. It will bite and make other defensive moves if it feels cornered.

The cascabel is nocturnal and starts to hunt at dusk and very early in the morning. Like other pit vipers, it can sense heat through the pits between its eyes and nostrils. Though the snake has good vision, it is able to hunt in darkness because of the information given by these heat-sensing pits. Since it moves with its body on the ground, it can also sense the vibrations made by predators or prey.

Because the snake is cold-blooded, it avoids extremes of temperature. During the hottest part of the day it keeps cool under a rock or in a burrow. It mates during the fall after the males compete for a female. The female gives birth to four to 10 baby snakes that next summer, though as many as 33 babies have been born. The baby snakes actually develop in eggs with soft membranes inside of their mother, and they hatch inside of her before they emerge.

Even though it’s not very aggressive, the cascabel, especially C.d. ruruima is responsible for many snakebites in Brazil. The usual time to be bitten by this snake is between October and April. The snake may not only bite and rattle its tail if it’s handled, but it might eject a bad-smelling and nauseating liquid from its cloacal gland.

Cascabels hunt with a combination of picking up their prey’s vibrations, sensing the heat given off by its body and through the workings of a Jacobson’s organ that analyzes its molecular signals. When the snake comes upon a prey it bites it, waits for the venom to work then swallows it whole, sometimes unhinging its jaws to do so.

Cascabels are not very aggressive and would rather run away if they feel threatened.

Cascabels are different from other rattlesnakes in that they live in Central and South America.

What is a cascabel?

The cascabel is a type of pit viper/rattlesnake that lives in Mexico and Central and South America.

Is a cascabel snake poisonous?

The cascabel is quite poisonous.

Where are cascabel snakes found?

Cascabel snakes are found in drier areas of their range, including dry lowlands and scrub.

The bite of a cascabel can be deadly if it is not treated in a timely manner. Victims are most likely to die because the venom, which is mostly a neurotoxin, paralyzes their respiratory system.