It has the ability to expel a stinky liquid from its body as a way to make predators (and humans) retreat! 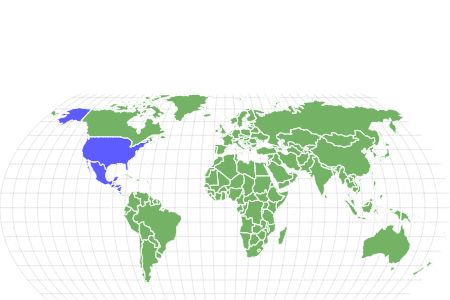 Name Of Young
Snakelets or neonates
Fun Fact
It has the ability to expel a stinky liquid from its body as a way to make predators (and humans) retreat!
Most Distinctive Feature
Its black and white checkered pattern
Distinctive Feature
Slender body with a thin tail
Litter Size
6 - 35 snakelets
Diet
Carnivore
Favorite Food
Frogs, toads, small fish, worms, mice, moles, and other rodents

View all of our Checkered Garter Snake pictures in the gallery.

View all of the Checkered Garter Snake images!

The checkered garter snake is aptly named for the black and white checkered pattern of scales running down its back. Frogs, worms, toads, and small fish are all a part of the diet of this snake. In terms of habitat, this snake can thrive in many places including savannas, grasslands, woodlands, and deserts. It measures just 18 to 24 inches long. Its small size is just one reason why some people care for these reptiles as pets.

Where to Find Checkered Garter Snakes

Checkered garter snakes live in a temperate climate. They’re found in varied habitats including savannahs, deserts, woodlands and grasslands. It’s not unusual to spot these snakes near rivers, ponds and streams.

Activity of this snake increases during mating season in the spring specifically late March to April. Alternatively, they disappear into rock crevices and abandoned burrows in the wintertime to brumate with other garter snakes.

Thamnophis marcianus is the scientific name of the checkered garter snake. The name marcianus is a reference to General Marcy, well-known frontier surveyor in the mid-1800s.

It belongs to the Colubridae family and class Reptilia.

The subspecies of this snake include:

The population of the checkered garter snake varies depending on the region. It’s described by the IUCN Red List of Threatened Species as abundant in Texas and rare in Costa Rica. As a consequence, there’s not an exact population listed for this garter snake. It’s categorized as Least Concern.

The ridged scales on the back of this snake are green with a black and white checkered pattern. There is a long white stripe down the middle of its back all the way to the end of its thin tail. The middle stripe is bordered by two more narrow, white stripes. The snake has a green head with black and white vertical stripes around its mouth. It has a white belly with narrow black bars and round eyes with black pupils.

How to identify a checkered garter snake:

An albino checkered garter snake is a rare find in nature. The albino variety of this snake has white or yellowish scales and red eyes. Otherwise, it’s the same size sharing the same diet and habits as other garter snakes. It’s albino due to a genetic abnormality.

Checkered garter snakes have venom but are not dangerous to humans. Their venom is not like the venom of a copperhead or cobra. A checkered garter snake’s venom is so mild it doesn’t pose a threat to people. Furthermore, this snake has small teeth, so its bite feels a lot like a sting.

Though the checkered garter snake is not poisonous to a human, there is some care necessary to address a bite from this reptile.

If the bite breaks through the skin, wash the area with soap and water. Next, apply first-aid cream to stave off infection. Then, cover the bite marks with a bandage to protect it as the skin heals. If a lot of redness or swelling develops around the bite wound, it needs additional care from a medical professional. Some garter snakes carry bacteria in their mouth, so it’s a good idea to get the bite checked if it doesn’t heal in a timely way.

A checkered garter snake has a secret weapon it uses against threats. It has the ability to expel a stinky liquid from its body as a way to make predators (and humans) retreat! The predator is so surprised and grossed out by the stinky liquid it lets the snake go!

This snake’s wide variety of habitats increases the chances of an encounter with humans. A person who lives near a field, wooded area or even near an overgrown empty lot is more likely to see this snake than someone residing in an urban area. The checkered garter snake is timid and inclined to slither away at the first sign of a human.

These garter snakes eat mice, moles, and other rodents. So, if there’s one living near your property, it’s helping to control the rodent population!

How do checkered garter snakes hunt?

Checkered garter snakes are very fast when pursuing their prey. Once they catch up to a rodent or frog, the snake gives it a bite. It moves its mouth as if it’s chewing on the prey to release its mild venom. Once the animal is dead, it’s swallowed by this snake. Depending on the size of the prey, the checkered garter snake may not need to eat every day.

No, they have a timid nature except for when they are pursuing prey!

Where do checkered garter snakes live?

These snakes live in the southwestern United States including Texas, New Mexico, and Arizona. Other places where they are found include Mexico, Belize, Costa Rica, Guatemala, Honduras, and Nicaragua.

They are found in a desert habitat, in savannahs, woodlands, and grasslands.

What do checkered garter snakes eat?

Mice, toads, frogs, worms, and small fish make up the diet of this snake.

It depends. It’s not uncommon for a dog to find a checkered garter snake slithering in a yard or around a large piece of property. If a dog gets a bite from a checkered garter snake, its venom doesn’t pose any real harm to the canine. This is especially true if the dog is large in size. But a dog who eats and swallows this snake can become sick. It should be taken to the vet.

Remember this snake can release a stinky liquid to deter predators including friendly dogs. So, there’s a good chance a dog wouldn’t want to chew on or swallow a snake that has released this liquid.

Why is the checkered garter snake endangered?

The checkered garter snake is not categorized as endangered. However, its numbers are decreasing in some regions due to habitat loss and loss of some types of prey.

The black and white checkered pattern on this snake is a sure way to tell if it’s a common garter snake or the checkered variety.

Where are checkered garter snakes found?

Checkered garter snakes live in rock crevices, in hollow logs or in abandoned rodent burrows. In the wintertime, they go into brumation with several other garter snakes inside a burrow or crevice. These snakes are normally solitary but gather together in one place for the winter to keep each other warm.