The Chipoo was first bred in the 1970s

Click through all of our Chipoo images in the gallery. 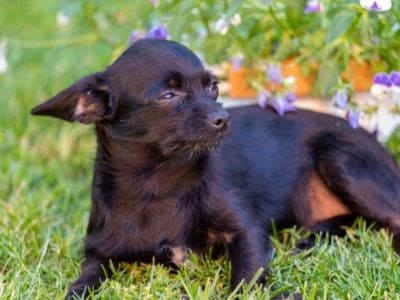 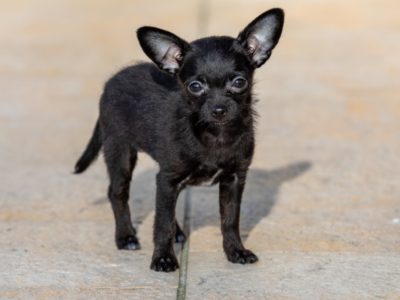 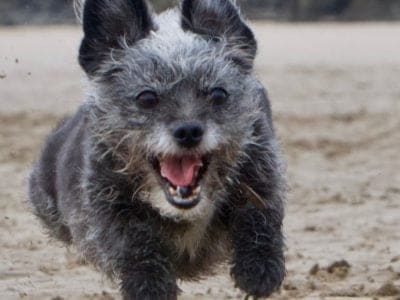 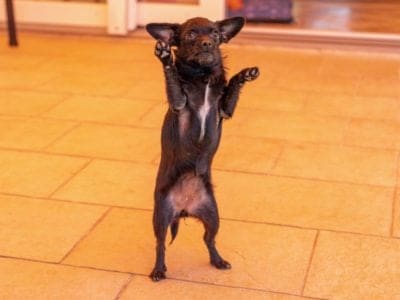 View all of the Chipoo images!

The Chipoo is a cross between a purebred Chihuahua and a purebred Poodle. The common term for this is a designer dog, in which two purebreds are crossed to produce desirable traits from both. The Chihuahua, which originated from Mexico, is a small, short-haired dog with a big, charming personality. The Poodle, which originated from France or Germany, is a small, long-haired dog with keen intelligence and athleticism. When crossed together, these two dogs can produce puppies with a wide variety of different characteristics. But owners can usually expect a Chipoo to have smooth, curly, or coarse hair of varying lengths with a brown, blue, black, white, cream, fawn, or silvery grey color.

3 pros and cons of owning a Chipoo

Just like its parents, a full-grown Chipoo is a small-sized dog with a thin frame. Some individuals are so small that they can quite literally fit inside of a teacup. These so-called teacup dogs are fairly common among the Chihuahuas and Poodles as well. A teacup Poodle is more likely to produce a teacup Chipoo. There are also few differences in the size and appearance of the males and females.

As a designer dog, the Chipoo may inherit some health issues from either parent, but it’s difficult to know ahead of time which ones these will be. In general, the most common problems are cancer, dry skin, digestive issues, hypoglycemia (low blood sugar), luxating patellas (essentially, a loose knee cap), and some eye conditions (particularly glaucoma, which can lead to blindness). If the Chipoo can avoid some of the worst health problems, then it can live a relatively long life of about 12 to 15 years. To sum up some of the most common health problems:

The Chipoo is an intelligent, energetic, and fun-loving dog with a big, expressive personality. Since it will always want to be an essential part of the family, the Chipoo makes for a great companion and friend with a very loyal streak. Another appealing trait is that the Chipoo can adapt to a variety of different living situations and doesn’t necessarily need a big yard or open space to thrive, though ideally, it should have plenty of things to do and new challenges to overcome. If the Chipoo doesn’t get enough physical and mental stimulation, then it may turn to destructive or annoying behavior such as howling and chewing.

How to Take Care of the Chipoo

The Chipoo is a low to medium-maintenance dog with some specific dietary and grooming requirements that will need your attention. If you purchase this dog as a puppy, it is a good idea to take it to the vet for an early health screening and then continue to visit the vet at least once a year after that as a full-grown adult.

Since it’s prone to some digestive problems, the Chipoo does best with a high-quality food specially formulated for small dogs. Ideally, the food should be divided into several smaller meals throughout the day to maintain a consistent blood sugar level. Calorie intake and food composition will probably vary with the dog’s age, size, activity level, and health. A full-grown adult will need to be carefully monitored for any signs of weight gain. At an ideal weight, you should be able to feel but not see the dog’s ribs. But a growing juvenile dog can be allowed to eat as much as it wants for the first several months of life. If you need some help coming up with ideas for the dog’s diet, then you should consult with your veterinarian.

Health and Entertainment for your Chipoo

The Chipoo does not shed very much at all (which makes it a good choice for people with allergies), but depending on the length and the consistency of the coat, it still needs to be brushed at least two or three times a week and sometimes as often as every single day. In addition, the fur will need to be trimmed several times a year to prevent it from tangling. If you don’t want to do it yourself, then you can take it to a grooming professional, who can even give your dog a unique hairstyle. The dog will also need its ears cleaned and nails trimmed whenever necessary, and its teeth should be brushed daily to maintain good oral hygiene.

The Chipoo needs to be trained as early as possible in its life to prevent it from exhibiting possessive behavior, house training problems, and other undesirable behavioral issues. Fortunately, this mix is bright and intelligent and takes very well to training. Although it has a bit of a stubborn streak, the owner should remain calm and patient at all times. The Chipoo responds best to positive reinforcement methods such as food and encouragement. Do not raise your voice or make threatening gestures toward it, since that will just discourage your dog. It’s also a good idea to vary the training routine to prevent it from becoming bored. If you don’t have the time or inclination to train the dog yourself, then you can enroll your dog in a professional training program.

Although the Chipoo has a lot of pent-up energy, it doesn’t take much exercise to get this does tire out. This highly adaptable dog enjoys all kinds of activities, including leashed walks, games, tricks, and playtime. These activities should be done in short intervals of about 10 to 30 minutes at a time.

Like just about any type of dog, it is always recommended to buy your puppies from a reputable breeder who screens for early health problems. Unfortunately, there are no rescue groups dedicated specifically for the Chipoo, but you may be able to find one at a Chihuahua or Poodle breed-specific rescue program that also cares for mixes. Regular rescue shelters are less likely to have one.

The Chipoo is friendly and gentle around children of all ages. However, since the Chipoo is very fragile and sensitive, you should be careful about introducing this dog around smaller children. Always closely supervise any interactions between them. This is done as much to protect the dog from a child who may not understand how to handle one.

Dogs Similar to the Chipoos

If you are a fan of the Chipoo, then you should definitely check out its two parent breeds, the Chihuahua and the Poodle. There are several other types of dogs with obvious similarities. Here is a list of them:

The Chipoo is a relatively young and obscure type of dog. It has not yet had a major impact on popular culture. However, both the parent breeds, the Chihuahua and the Poodle, are among the most popular breeds in the United States. Both types of breeds have won dog shows and appeared in movies and TV shows.

Popular Names for the Chipoos

If you are looking for a good dog name, then you might want to consider one of these popular names for the Chihuahua and Poodle.

What is a Chipoo?

A Chipoo is a cross between a purebred Chihuahua and a purebred Poodle. However, you should not expect the Chipoo to have an equal distribution of its parent’s traits. Even within the same litter, some puppies may be more like a Poodle, while others may be more like the Chihuahua. It’s difficult to predict what it will be ahead of time.

How do you potty train a Chipoo?

House training is always one of the more difficult challenges in a dog’s life, but there are several things you can do to make it easier for yourself. First, choose a specific area in your home where the dog can go regularly. Second, take your dog outside at predictable times, like shortly after a meal, and wait patiently until it goes. Third, you can encourage the dog to go by teaching it a key phrase and repeating it. That will allow the dog to know what is expected of it. Fourth, you should always use positive reinforcement methods without raising your voice. Reward its behavior with small, tasty treats or toys.

How big do Chipoo dogs get?

The Chipoo rarely grows larger than 15 inches at shoulder height and about 20 pounds in weight.

Although the Chipoo does shed a little, the relatively hypoallergenic coat still makes it a good choice for people with allergies.

How long does a Chipoo live?

The Chipoo has a life expectancy of around 12 to 15 years.

No, the Chipoo is a very kind and gentle dog unless specifically threatened or provoked. But it does have the tendency to howl and bark a little.