Camouflages itself as a dead leaf! 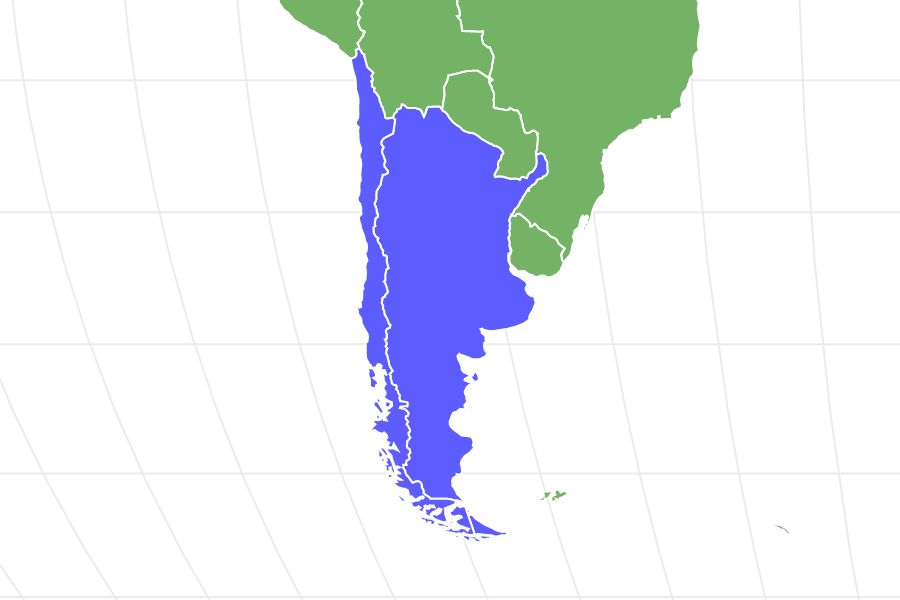 View all of our Darwin’s Frog pictures in the gallery.

View all of the Darwin’s Frog images!

The unique carnivorous Darwin’s frog carries tadpoles in its vocal sac for up to 70 days!

Darwin’s frog is native to streams and forests of Chile and Argentina. This tiny frog species gets its name after explorer Charles Darwin. He discovered the frog during his famous “Voyage of the Beagle” from February 1832 to September 1835. Darwin’s frog is able to camouflage itself on the forest floor, thanks to its evolving to look like a dried-up leaf.

Commonly called Darwin’s frogs, these tiny amphibians of the class Amphibia bear the scientific name of Rhinoderma darwinii. They belong to the family Rhinodermatidae.

Two species of Darwin’s Frogs exist. One originates in northern Chile, while the other lives in southern Chile and Argentina. Sadly, scientists believe the northern Darwin’s frog to be extinct from a deadly fungus outbreak. But hope remains that these northern species still exist somewhere in the forests of northern Chile.

Of their scientific name, “rhinoderma” means rhinoceros-nosed. But they get their common name from the explorer who discovered and documented their existence, Charles R. Darwin.

Darwin’s frog’s upper body skin is brown or green in color with large blotches. Its bottom side is usually black or white. Their skin features many warts as well.

The tiny frog relies on its coloration and skin texture to camouflage itself on the forest floor and in streams, looking like a dried leaf. Each individual frog’s body print and colors work much like a fingerprint for humans. No two frogs have the exact same patterned appearance.

The frog’s body is rounded, but its head is shaped like a triangle with a pointed snout. Its thin legs work very well for hopping on the forest floor at speeds of up to five miles per hour. Only its hind feet have webbing between toes, ideal for swimming. This lets the front feet better grip the ground.

This little frog is similar in size to a sewing thimble. It averages from 0.9 to 1.2 inches in length.

Darwin’s Frog is a diurnal creature, meaning it sleeps at night and is mostly active during daytime. When threatened by predators, the frog plays dead. It lays very still on the forest floor or floating in a stream. Its coloration and skin patterns make it look like a dead leaf, blending it in perfectly with forest debris.

Darwin’s Frogs live in the glades and forests of Chile and Argentina. The frogs prefer living in forests, bogs, and along the edge of slow-moving streams or swamps. But they live at altitudes of up to 3,600 feet above mean sea level. Overall, their habitat includes grasslands, the woody debris of forest floors, mossy areas, young trees, young bushes, and elsewhere in native forests.

Darwin’s Frogs are best suited for places with short vegetation, which keep the soil moist and at a cooler temperature. Since their coloration matches the habitats in which they live, they also find better places to hide from predators.

During the day and when sleeping, Darwin’s Frogs take shelter under logs or moss. They also enjoy basking in sunlight when no predators are near.

Like many of its amphibian and frog cousins, Darwin’s Frog is a meat-eater. To capture its prey, the carnivorous frog simply sits quietly and waits for passing insects, spiders, snails, and worms. When prey comes near, the frog ambushes it quickly and silently with its long, sticky tongue.

The biggest threats to Darwin’s Frogs are the fungus chytrid, which causes an infectious disease called chytridiomycosis. This fungal infection is capable of killing more frogs, more quickly than its natural predators or humans. Scientists do not know the origin of the bacteria responsible for this fungal infection. But it is believed to have wiped out the entire population of the northern Darwin’s Frog species of northern Chile. This means only the southern population of Darwin’s Frogs remain in southern Chile and Argentina.

When a predator is near, the Darwin’s Frog uses its coloring to help it hide from the animal. By laying very still on the forest floor, the frog blends in with its surroundings. The predators only see what looks like another dead leaf on the ground. The frogs also drop or jump into a stream and float like a leaf down the river.

Humans threaten the Darwin’s Frog habitat through urbanization. Deforestation and encroaching cities take habitat from the frogs for human use. Other threats are results of climate change: changing temperatures and increased sun UV exposure can kill the frogs.

The northern Darwin’s frog is believed to be extinct. Its southern cousin of southern Chile and Argentina is vulnerable to extinction. Their risk for extinction is primarily due to human deforestation, climate change, and fungal infection threat.

To reproduce, Darwin’s Frog males call out loudly during the night and throughout each day for females. This call is a quick pattern of “piiip” sounds. When a male finds a female to mate with, he leads her to shelter for breeding. This shelter is usually a mossy log or other partial covering.

The Darwin’s Frog is very unusual in how it takes care of its young. Each mating season ideally results in up to 40 clear eggs to a clutch. The female deposits the clutch of eggs into leafy debris on the forest floor. The male fertilizes the eggs, then stays nearby because his job is not finished. He waits for about three weeks near the clutch until the larvae are able to squirm within their eggs. He then scoops all of the eggs into his throat’s vocal sac. There, they spend about three days before hatching into tadpoles.

At the end of their 50 to 70 days in the vocal sac, the tiny froglets move into their father’s mouth. The male frog then appears to spit the little frogs out. This process usually takes place at a stream.

The International Union for Conservation of Nature (IUCN) lists Darwin’s Frogs (Rhinoderma darwinii) on their Red List of Threatened Species as endangered due to the population is decreasing.

Darwin’s Frogs are carnivores. They eat insects, spiders, snails, and worms. They ambush their prey, sitting still until the prey comes close to the frog. Then the frog sticks out its sticky tongue with lightning speed, capturing the prey and pulling it into its mouth.

How many Darwin's Frogs are left in the world today?

Scientists do not know exactly how many southern Darwin’s Frogs (Rhinoderma darwinii) are left in the southern part of Chile and Argentina. But they do know that this population is on the decline. Because the northern Darwin’s Frog of northern Chile is believed extinct, conservationists are working to preserve Darwin’s Frog habitat. The northern frog went extinct because of an infectious fungal disease.

What is a Darwin's Frog vocal sac?

The Darwin’s Frog vocal sac is a membrane of skin in the male frog’s throat. This sac helps it make loud calls for mating or to make its presence known. Only males have the sac. In Darwin’s Frogs, this is the place where the male keeps its offspring for up to 70 days, while the young grow strong enough to make it on their own in the wild.

What Kingdom do Darwin's Frogs belong to?

What phylum do Darwin's Frogs belong to?

What class do Darwin's Frogs belong to?

What family do Darwin's Frogs belong to?

What order do Darwin's Frogs belong to?

What genus do Darwin's Frogs belong to?

What type of covering do Darwin's Frogs have?

In what type of habitat do Darwin's Frogs live?

Darwin’s Frogs live in beech tree forests and in fields.

What is the main prey for Darwin's Frogs?

What are some distinguishing features of Darwin's Frogs?

Darwin’s Frogs have small bodies and a leaf-like appearance.

What are some predators of Darwin's Frogs?

Predators of Darwin’s Frogs include rodents, snakes, and birds.

What is the average clutch size of a Darwin's Frog?

What is an interesting fact about Darwin's Frogs?

What is the scientific name for the Darwin's Frog?

The scientific name for the Darwin’s Frog is Rhinoderma Darwinii.

What is the lifespan of a Darwin's Frog?

What is the lifespan of a Darwin's Frog?

How fast is a Darwin's Frog?

A Darwin’s Frog can travel at speeds of up to 5 miles per hour.

How do Darwin's Frogs have babies?