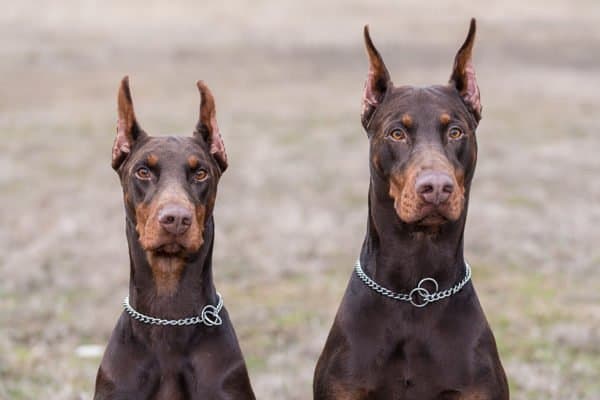 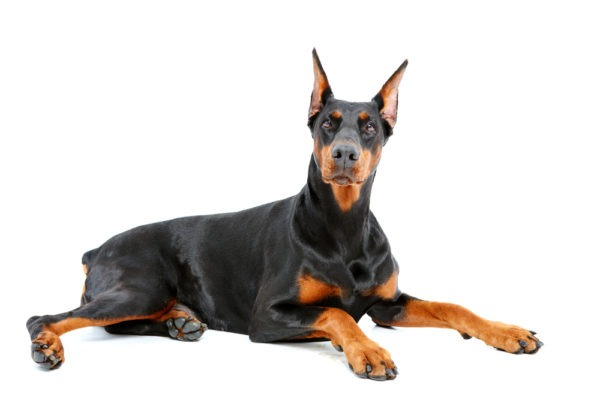 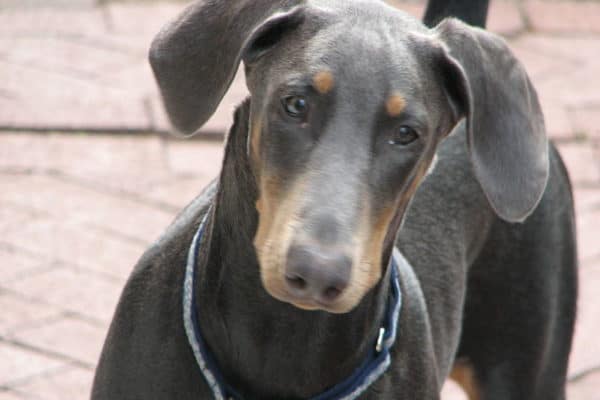 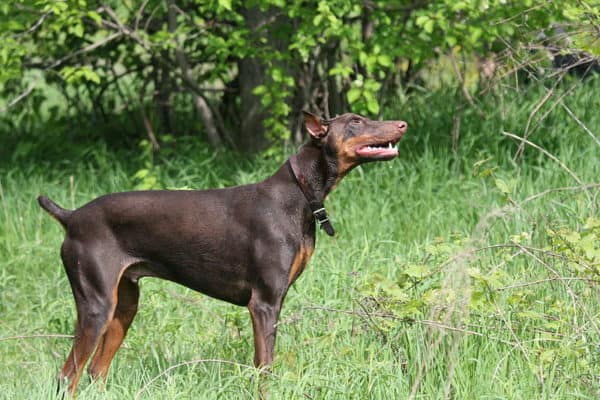 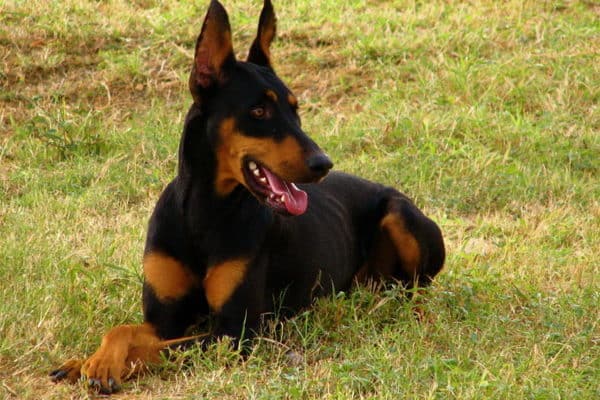 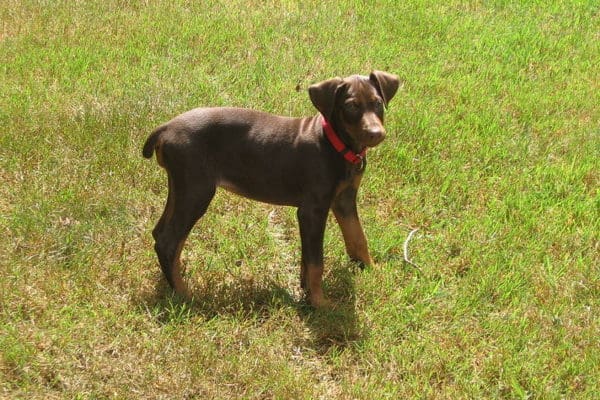 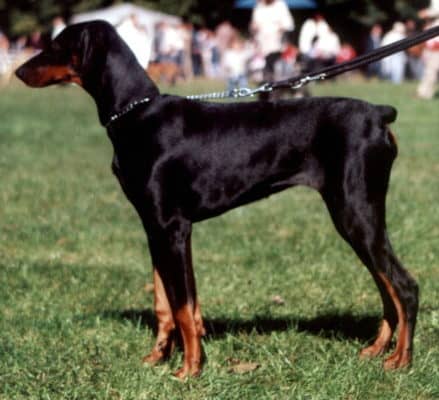 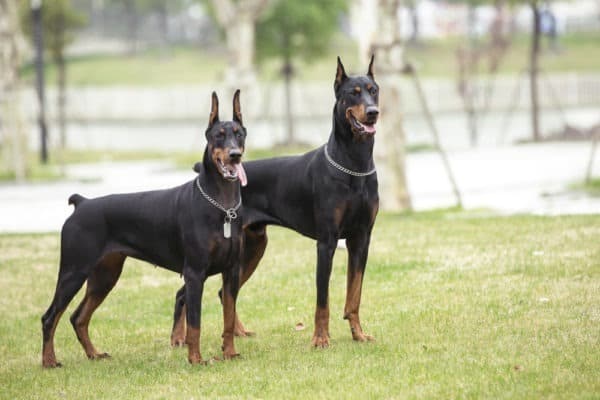 This post about the Doberman pinscher breed may contain affiliate links to our partners. Purchasing through these helps us further the A-Z Animals mission to help us educate about the world’s species so we can all better care for them.

Pinschers are known to be extremely fearless and have been one of the finest protection dog breeds in the world. This breed of dog is known to have originated in Germany and was developed by Karl Friedrich Louis Dobermann in 1890. These dogs come in a variety of colors including black, rust, brown, white, blue, and red.

The red Dobermans are especially considered to be attractive and amazing. The blue ones are a result of a special genetic pigmentation. These dogs also have a miniature version of the breed, known as mini Doberman pinscher. However, the mini pinscher is a whole separate breed.

3 Pros and Cons of Owning a Doberman Pinscher

If you are thinking of owning a Doberman pinscher as a pet, you might want to consider what does — and doesn’t — make it favorable.

There are several health issues that Dobermans suffer from, including cervical vertebral instability and dilated cardiomyopathy. Cervical vertebral instability impacts their spine and neck, causing the dog to wobble (giving the disease the nickname “wobbler syndrome”). Dilated cardiomyopathy is a condition that impacts the heart, thinning the ventricle and preventing it from pumping blood correctly.

Doberman pinschers may also fall ill with Von Willebrand’s disease, which prevents the blood from clotting as it should. It is caused by lack of a protein that the platelets need in order to clot.

The most common health concerns with this dog include:

This dog makes a great family companion, and it is usually very difficult for it to live in kennels. With its outpouring of affection, these dogs like to be with their families inside, despite the plentiful energy.

To make sure that this energy doesn’t become destructive, they must get a lot of physical activity. If you live in an apartment and don’t get out much, it may not be the right dog for you.

How to Take Care of a Doberman Pinscher

If you are looking to buy a Doberman pinscher, there are a few things that you should know about taking care of it. Providing this dog with the right home and nutrition will promote a longer lifespan and a significantly more harmonious home.

Doberman puppies that are up to three months of age should ideally be fed about 3 to 4 times a day. For adults, however, the feed should be broken into two as one big portion could be difficult to digest.

Your Doberman pinscher should be fed foods that are easily digestible. Their main feed includes chicken, beef, brown rice, lamb, and sweet potatoes, which can be served within a dry dog food or prepared by the owner.

Like any other animal that you would have as a pet, Doberman also suffers from a host of problems that could require insurance. However, as an owner, you need to identify the needs and issues of your Doberman so that you can pick the right kind of insurance for your dog that will have it covered when needed.

Some veterinarians offer payment plans and personalized programs that also help with these insurance costs.

The Doberman is not a very high maintenance animal but will need regular grooming for sure. Tasks include the removal of “eye boogers,” brushing the dog’s teeth, removing any excess hair and brushing its fur, and thoroughly clean its ears.

Besides that, you would also need to regularly bathe your dog and trim its nails to keep it healthy, safe, and clean. These dogs do not shed too much, so regular brushing is more of a luxury than a necessity.

These dogs are easy to train and quickly pick up new skills. They are smart and intelligent and don’t take much time in starting to pick up commands. However, the training needs to be consistent and you have to spend a lot of time with your Doberman puppy for it to be used to it.

Usually, the right way to go about it would be to take your Doberman puppy out for about half an hour and start using a simple command. If you take your puppy to the same spot every time, it will start recognizing the scent and will start picking up commands in no time.

Dobermans need a lot of physical activity every day. They are energetic animals and need exercise to get out their energy. Otherwise, they could turn into aggressive pets and with behavioral issues. This dog needs a lot of room to roam, so apartment living may not be ideal. In case your Doberman is injured or stressed, a muzzle would be a great idea. This device would help the dog to do regular activities like eating, drinking, and panting but will restrict the distressed behavior.

Doberman Pinscher puppies are cared for in much the same way as adult Dobermans. However, they are more sensitive than the adult version of this breed, and they need more care. They should be fed 3 to 4 times, unlike adults that should be fed twice each day.

Some dogs are very similar to Doberman pinscher. These breeds include:

1) Ibizan Hound: These dogs are very affectionate towards children. However, they can also sometimes turn very aggressive if threatened. Overall, the breed is considered intelligent and incredibly energetic. Learn more here.

2) Pointer: This is a well-built dog — just like the Doberman pinscher. The German pointer was originally bred as a hunting dog in the 19th century, giving it a strong and sturdy physique. It also is incredibly gentle and loyal to the children in the family. Learn more here.

3) Rottweiler: These dogs are especially like Doberman pinschers and are very attached to their owners. They need to be kept inside the house with the family and usually don’t like to live in kennels. Learn more here.

Doberman Pinschers have been a part of several movies. Some of them include The Amazing Dobermans, America’s Sweethearts, Beethoven, and Father of the Bride to name a few. Some celebrities who have owned this breed including Bea Arthur, Jean-Christophe Novelli, Bela Lugosi, Tanya Roberts, and Raquel Welch.

Here are some popular names for Doberman pinscher:

How much does Doberman pinscher cost to own?

Is Doberman pinscher good with kids?

How long does a Doberman pinscher live?

These dogs usually live for about 10 to 13 years.

How fast can Doberman pinschers run?

These dogs can run at a speed of 32 mph.

Is a Doberman pinscher a good family dog?

Yes, these dogs are known to be great family companions and are very friendly and compassionate towards their owners.

The Doberman pinschers are usually friendly. However, if they are withheld from exercising, their energy can pent up and cause them to be aggressive and initiate other behavioral issues as well.

How long do Doberman pinschers live?

These dogs usually live for about 10 to 13 years.

How big do Doberman pinschers get?

What is the scientific name of Doberman pinscher?