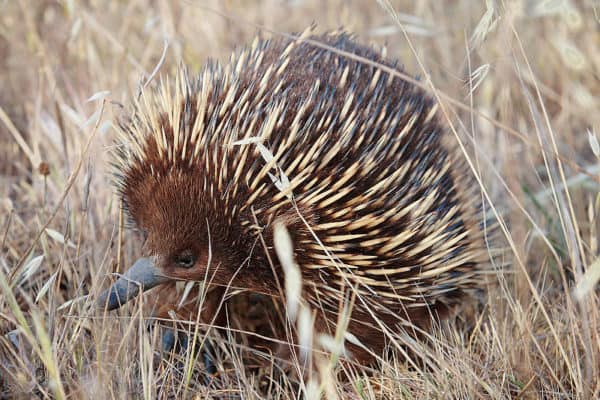 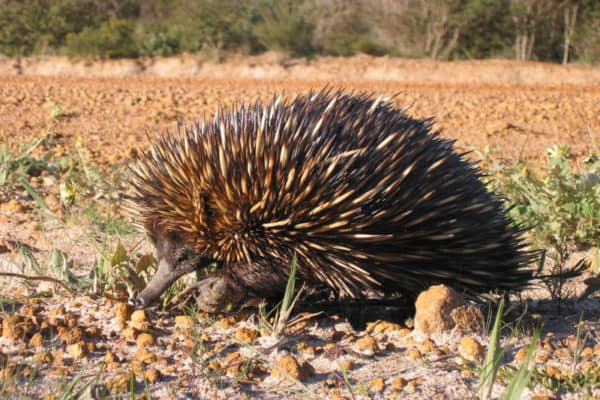 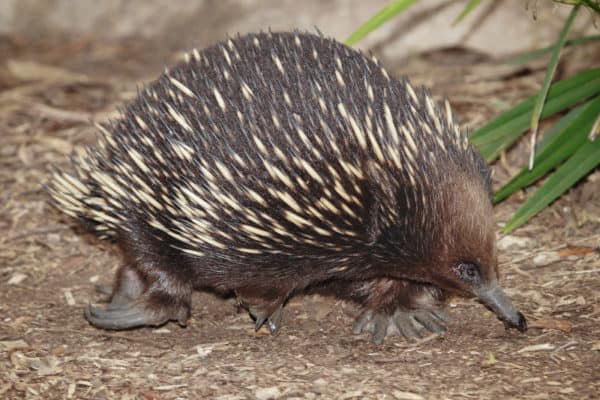 “One of only two mammals that lays eggs!”

Echidnas, formerly called the spiny or spiky anteater, is one of only two mammals that lays eggs! The other is the platypus. Interestingly, both animals are found in Australia. Echidnas are also found in New Guinea. Every other mammal gives birth to live young. Like other mammals, the echidna also feeds its young with milk, is warm blooded and has fur.

These are four species of echidna. Their scientific names are:

Zaglossus means “through the tongue” in Greek. It’s also called the Cyclops long-beaked echidna because it is from the Cyclops Mountains in New Guinea.

Tachyglossus comes from the Greek for “quick” and “tongue.” Aculeatus means “spiny.”

Echidnas have robust bodies and beaks through which they extrude a sticky tongue that can lap up ants, earthworms or termites. They defend themselves by rolling into a ball, very much like an aardvark or a hedgehog and presenting their spines. Echidna spines are made of keratin, like human fingernails. They have surprisingly large brains for their size and well developed cerebral cortices.

The eastern long-beaked echidna, Zaglossus bartoni, differs from its cousins in that it has five claws on its front feet and four claws on its back feet. It can weigh between 11 and 22 pounds and is from two to a little over three feet long. It has spurs on its back legs like the platypus. Both males and females are born with spurs, and they are not venomous, unlike the spurs of the male platypus. Females lose their spurs, but males keep them. Female eastern long-beaked echidnas are also bigger than males.

Zaglossus bruijni, or the western long-beaked echidna, is the largest of all the egg laying mammals. It can weigh up to 36 pounds and has long fur along with spines. It has three claws on its feet and a short tail. The snout curves down and makes up most of the length of the animal’s head. It doesn’t have teeth but there are teeth-like projections on its tongue. The number of claws a member of Zaglossus bruijni has seems to depend on the individual. Some have claws on the middle three digits of a five digit foot while others have five claws. Only the males have spurs.

Sir David’s long-beaked echidna, or Zaglossus attenboroughi is the smallest of the Zaglossus echidnas. It weighs between 11 and 22 pounds. In this case the male is bigger than the female, and only he has spurs on his feet. It has dense, fine fur and only a few white spines. Its lack of external genitalia gives it and other echidnas the order name of Monotremata. This means that the animal excretes, mates and lays eggs through one opening called a cloaca. Females also develop pouches.

Zaglossus attenboroughi is nocturnal and like other echidnas rolls up into a bristling ball when it’s threatened. Its snout is about 2.8 inches long and a bit straighter than that of the other species.

Tachyglossus aculeatus is the short-beaked echidna, named because of the speed with which its tongue catches its prey. Like other echidnas, it is toothless and does not have external ears. It weighs between 4 and 15 pounds and is 12 to 18 inches long. Hardened pads are found at the back of the animal’s mouth, and males have spurs on their hind legs. This echidna has powerful front legs and claws much like a mole. This lets it burrow into the ground quickly. It is adapted to living underground because it can tolerate environments with low oxygen and high carbon dioxide. It cannot sweat, so it stays in its borrow during the hottest part of the day.

The short-beaked echidna hibernates or goes into torpor during the winter.

Unlike the Zaglossus echidnas, the short-beaked echidna is abundant and found in nearly all Australian habitats and into the eastern part of New Guinea.

The echidna prefers moderate temperatures and can be found escaping heat in shaded areas like tunnels, fallen logs, caves, or even burrowing underground. The Zaglossus echidnas live in forests high in the mountains or in alpine meadows and tend to avoid the coast. They are found in New Guinea and Australia.

Long-beaked echidnas eat worms and insect larvae, while short-beaked echidnas eat mostly ants and termites. Similar to anteaters, echidnas use their specially adapted snouts and tongues to extract these small prey from hard to reach places. Echidnas also use an electroreceptive system to locate their food. They have 400-2,000 receptors in their snouts, making them incredibly sensitive to subterranean movements and therefore able to locate prey easily. While this adaptation is common in aquatic or amphibious animals, echidnas are one of only four non aquatic species with this adaption. The others are platypus, bees, and cockroaches.

Unusually, the Echidna not only lays eggs like a reptile, they have a pouch like a kangaroo, protective spikes like a porcupine (though not hollow like a porcupines) a snout like an anteater, and a spiky tongue for extracting hard to reach food. With the lowest body temperature of any mammal and a slow metabolism echidnas can live up to 50 years in captivity.

The greatest threat to echidnas is hunting. Aboriginal Australians consider the small creature to be a food delicacy. Though the short-beaked echidna’s conservation status is Least Concern, the other echidnas are vulnerable or critically endangered. Indeed, one species might even be extinct.

Zaglossus bruijni is critically endangered thanks to the loss of its habitat and hunting. People in Papua, where it lives, consider it a delicacy. However, hunting it has been banned save under special circumstances.

The eastern long-beaked echidna’s conservation status is Vulnerable because of habitat loss and hunting by both humans and feral dogs. However, its status has improved from critically endangered.

Echidnas are also put in danger by parasites such as tapeworms, which they get by drinking water used by infected animals.

Echidnas are solitary and only come together to mate. After they mate, the females raise the babies exclusively. Most people do not know the exact mating habits of Zaglossus echidnas because they are so scarce, and it is difficult to even place tracking devices on them because of their spines. Biologists assume that these echidnas mate and reproduce much like their cousin Tachyglossus aculeatus.

Captive short-beaked echidnas reach sexual maturity when they’re between five and 12 years, and females lay eggs from between every other year to every six years. There are no special names for male and female echidnas, probably because it took people so long to find out which sex was which.

During the mating season, which is between June and August, the female is followed by one or a group of males. Males follow in single file in what’s called an “echidna train.” This can go on for a few days or for weeks, but the female only mates once per season and only with one male.

The female is pregnant for about 23 days, and during that time she creates a nursery burrow. She lays one egg in her pouch. Echidna eggs are leathery and cream colored. They are about a half an inch in diameter and weigh between .053 and .071 of an ounce. The egg hatches in 10 days, and the baby helps itself escape with an egg tooth, much like a chicken.

Baby echidnas are called puggles, and they are about 0.6 inches long and weigh between .011 and .014 of an ounce. They leave the pouch and attach themselves to areas on their mother’s chest that secrete milk. These are not the nipples or teats found in other animals, but patches. The milk oozes out from dozens of tiny pores. The milk is so rich that it is sometimes pink from its iron content. This allows the baby to go for long periods without feeding while the mother leaves the burrow to look for food. Most puggles nurse for about 200 days, then leave the burrow soon after. When this happens, the baby and its mother cease to have contact.

• Biologists believe there are between 5 and 50 million short-beaked echidnas in Australia, though they are much more rare in New Guinea.

• The numbers of Zaglossus bruijni are in severe decline, and the animal may be extinct

• Though the number of adult Zaglossus attenboroughi is unknown, its population is also decreasing.

Are echidna carnivores, herbivores, or omnivores?

Echidnas are carnivores that specialize in insects and invertebrates.The short-beaked echidna eats termites and ants. They create pits in the soil as they look for food, usually in the shade of large old trees. They tear open ant colonies and termite nests with their claws and use their tongues to catch the insects. Then, they grind them up with the hard pads in their mouths. Because it is almost impossible not to eat soil along with the ants and termites, the echidna’s feces are often full of dirt.Sir David’s long-beaked echidnas are thought to eat worms and other invertebrates. People sometimes find the holes their snouts poke in the ground as they look for food.The eastern long-beaked echidna feeds at night on grubs and earthworms. The spiny, toothlike structures on their tongues help them get a firm grip on the soft bodied invertebrates. They often find prey in rotting logs or by pressing their head and forelimbs into wet earth. This causes them to uncover the earthworms.Zaglossus bruijni eats earthworms almost exclusively. They eat the earthworm head first, holding it in place with the spikes in its tongue. Zaglossus bruijni may also eat termites, ants or grubs.

What is the difference between Echidnas vs anteaters?

Echidnas and anteaters are not related to each other, even though they use the same method for collecting food. True anteaters are found in South America and north into Mexico and belong to the suborder Vermilingua, which means “worm tongue.” They include the giant anteater, the silky anteater, the southern tamandua and the northern tamandua.Like the spiky echidna, anteaters have long snouts with very long, sticky tongues. Their tongues, which are actually attached to their breastbone, can be longer than their heads. Their mouths are like tubes, and they lack teeth but have lips. They are also like echidnas in that they have powerful claws that can tear open the nests of ants and termites.Anteaters have thick fur to protect them from the bites and stings of their prey, and they use their tongue to lap up as many of the insects as quickly as they can. Like echidnas, their tongues have tiny hooks that grab on to their food. Copious amounts of saliva also may help the anteater from feeling bites or stings. Instead of hard pads at the back of their mouths, anteaters have hard folds in their stomachs that grind up their meal with the help of the sand and grit that they’ve eaten.True anteaters are also like echidnas in that it is difficult to sex them, though males tend to be larger. The female usually has one baby at a time, though they have twins in rare cases.