Found exclusively on the African continent!

Click through all of our Elephant Shrew images in the gallery. 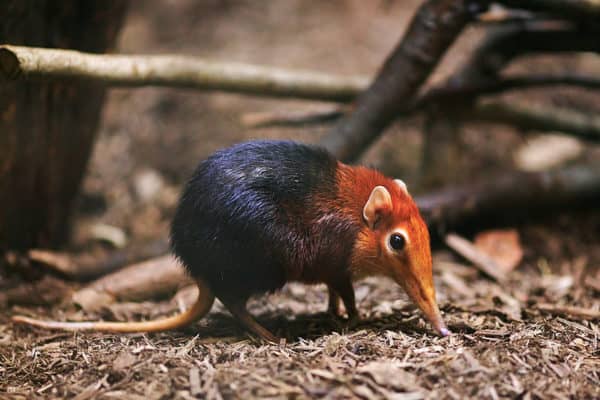 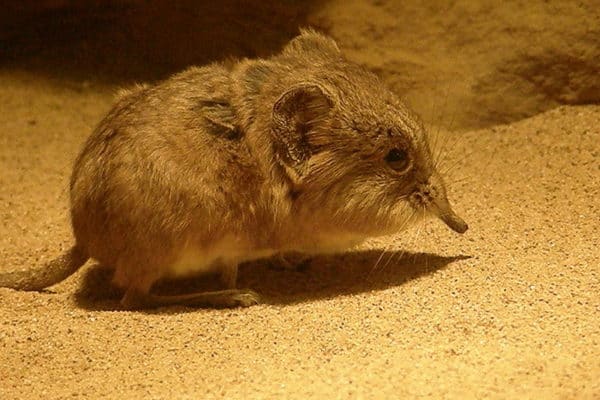 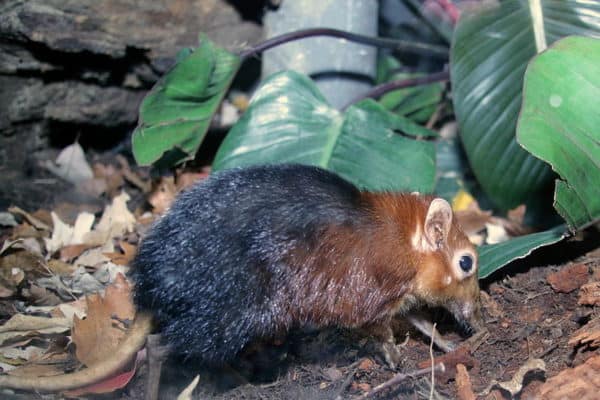 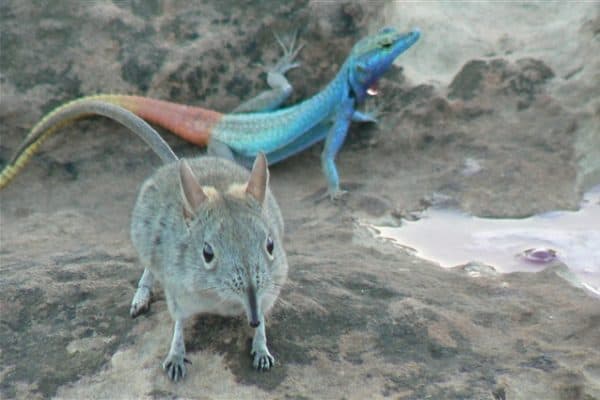 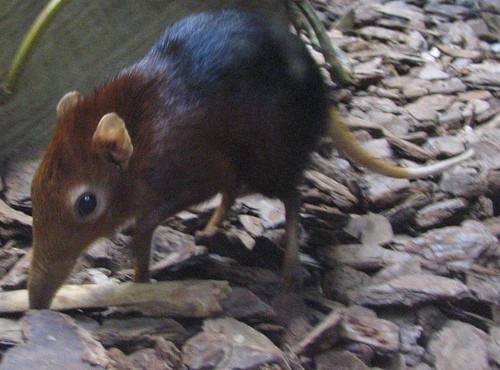 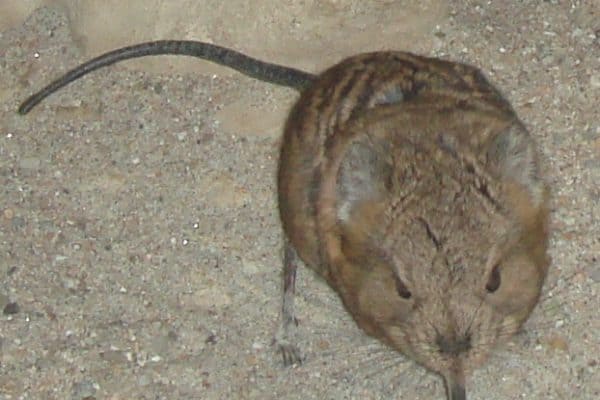 View all of the Elephant Shrew images!

You would never guess it by looking at them, but elephant shrews are more closely related to elephants than shrews.

There are approximately 20 different species of these shrews, but they all belong to the family Macroscelididae. The name is derived from the Greek words “macro,” meaning “long,” and “skelidos,” meaning “legs.” All elephant shrews have very long and powerful legs relative to the small size of their bodies, so this is a fitting name.

Elephant shrews can belong to all of the following genera:

Other common non-scientific names for this type of animal are “jumping shrew” and “sengi.” They are known as the elephant shrew most commonly due to their long snout.

These shrews are quite small and typically only grow to be four to twelve inches in length, not counting their tails. An elephant shrew’s tail can grow up to nine inches in length. The largest species of this shrew can weigh up to one and a half pounds, but most species weigh less than a pound. To put this in perspective, this means that the average elephant shrew weighs about as much as a large can of soup.

In general, these shrews have short, stiff, and glossy fur similar to rodents like mice, and their coloring often depends on the species. They can sport black, grey, brown, white, tan, or golden fur, and certain species have a checkered coat with multiple colors.

They have scaly tails, powerful hind legs, long feet, and long, thin snouts that are similar enough to an elephant’s trunk to give them their colloquial name. Their long, flexible snouts, along with their large eyes and ears, allow them to hunt for insects and escape predators.

Their long hind legs allow them to jump up to three feet in the air, similarly to rabbits, and this is where the nickname “jumping shrew” comes from.

These shrews are extremely active and considered diurnal, which means they sleep at night and are awake during the day.

These shrews belong to a special group of mammals known as Afrotheria, which means that they are of African origin. They can be seen in zoos, but they only live in the wilds of Africa.

In particular, they can be found in the stone deserts, savannas, and arid steppes of the continent. In fact, they are known to thrive in the Namib Desert, which is famous for being one of the driest places in the world. They can also be found in the tropical forests of East Africa as well.

These animals are primarily insectivores, but they may also eat leaves, fruits, and seeds. Ants, termites, worms, spiders, centipedes, and millipedes are their diet of choice.

They use their proboscis-like noses together with their paws to clear away small paths on the ground in order to lure insects close. They have exceptional senses of sight, hearing, and smell, and this helps them to both searches for food and escape predators.

These shrews have long, skinny tongues like an anteater, and this helps them to hunt and eat insects more easily.

Because they are so small, these shrews face a number of predators, including snakes, lizards, and various birds of prey. While it’s also true that any carnivorous or omnivorous type of animal would prey upon the little elephant shrew, the truth is that they are difficult to catch.

These shrews are well-adapted to their habitats. Not only are they masterfully camouflaged by their coloring, but they are also very speedy and nimble. Most elephant shrews can run up to 18 miles per hour and leap three feet into the air.

More than predators, the biggest threat to the shrew comes from the loss of habitat. Deforestation and the habitat fragmentation that comes with agriculture and logging both have had a devastating impact on the elephant shrew population.

They are listed as “not extinct,” but their conservation status is generally considered endangered. The two species of these shrews that are considered the most threatened are the gray-faced sengi, which was only discovered in 2005, and the golden-rumped elephant shrew, which is officially listed as endangered.

These animals have relatively short lifespans, so they reach sexual maturity at an early age. Most elephant shrews live only two years in the wild and up to four years in captivity.

One unusual trait of these shrews is that the females have menstrual cycles that are very similar to those of human females. Most mammals are only sexually viable during certain times of the year, so frequent menstruation means that they are able to birth multiple litters annually. Another uncommon trait is that elephant shrews mate for life, and these couples fiercely defend their territory.

Gestation ranges from 45 to 60 days, and a typical healthy litter contains no more than three babies. It is common for female shrews to give birth to only one or two babies at a time.

Babies are weaned from their mothers within a week of birth, and they are ready to explore their surroundings and migrate away from the nest by day 15. After about 45 days, the young elephant shrews will become sexually active and establish their own nests far away from their parents.

What is an elephant shrew?

An elephant shrew, also commonly known as a jumping shrew or a sengi, is a small, rat-sized mammal that is native to Africa.The name “elephant shrew” is derived from the animal’s long, thin and flexible snout, which is said to resemble an elephant’s trunk.Elephant shrews are a part of what is known as Africa’s “Little 5,” a phrase used to call attention to some of the smaller, lesser-known African wildlife. This name is meant to contrast the so-called “Big 5,” which includes lions, elephants, rhinos, leopards, and buffaloes.

Elephant shrews are considered omnivores. Their diet primarily consists of insects such as ants, termites, worms, spiders, centipedes, and millipedes, but they are also known to feast on plant matter, fruits, and seeds that they are able to find near their nests.Female elephant shrews will also store mashed food in their cheek pouches to feed to their young once they have begun to wean themselves from her milk.

Why do elephant shrews have long noses?

The long, thin, and flexible nose of an elephant shrew is technically called a proboscis. An elephant shrew’s snout is used to help it hunt for food and escape predators. It is also a helpful tool that can be used to clear little pathways that the elephant shrew uses to lure insects and quickly run away from danger.Elephant shrews also have long tongues like anteaters, and having a thin, elongated snout allows them to use their long tongues to flick small insects into their mouths.

Can elephant shrews be pets?

Despite their cute and cuddly appearance, elephant shrews are wild animals that can only survive and thrive in Africa or in carefully controlled captive environments like zoos and conservation centers.Besides this, they are also an endangered species, and this makes them unsuitable and illegal to have as pets.Instead of an elephant shrew, consider adopting a mouse, rat, gerbil, hamster or chinchilla.


Are elephant shrews related to elephants?

Believe it or not, the tiny, furry elephant shrew is more closely related to its massive namesake than it is to actual shrews. Researchers have noted that the elephant shrew shares much of its genetic material with elephants.Interestingly enough, even though it is called a shrew, the elephant shrew is not related to shrews at all. This is why they are more commonly referred to as sengis. “Sengi” is a Swahili word, and it denotes them as a species completely separate from shrews.

Are elephant shrews dangerous to humans?

You might have heard that shrew bites are venomous to humans, and this is true. While a bite from a shrew is unpleasant, the venom is not typically lethal to humans. However, the good news is that elephant shrews are not a part of the shrew family, so they do not carry the same venomous bite.Generally speaking, elephant shrews do not pose much danger to humans. Sengis tend to shy away from anything that could be considered dangerous or predatory, so they do not interact with humans much at all.

What Kingdom do Elephant Shrews belong to?

What phylum do Elephant Shrews belong to?

What class do Elephant Shrews belong to?

What family do Elephant Shrews belong to?

What order do Elephant Shrews belong to?

What genus do Elephant Shrews belong to?

What type of covering do Elephant Shrews have?

Elephant Shrews are covered in Fur.

In what type of habitat do Elephant Shrews live?

What is the main prey for Elephant Shrews?

What are some distinguishing features of Elephant Shrews?

Elephant Shrews have long noses and long back legs.

What are some predators of Elephant Shrews?

Predators of Elephant Shrews include snakes, lizards, and birds of prey.

What is the average litter size for an Elephant Shrew?

The average litter size for an Elephant Shrew is 2.

What is an interesting fact about Elephant Shrews?

Elephant Shrews are found exclusively on the African continent!