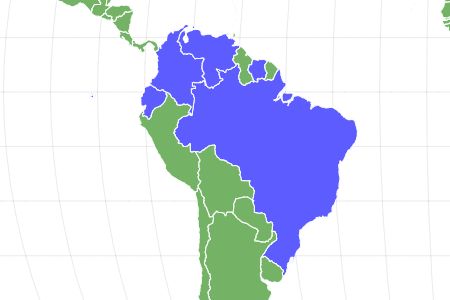 View all of our False coral snake pictures in the gallery.

View all of the False coral snake images!

A false coral snake looks a lot like a coral snake but is non-venomous. Its diet consists of smaller snakes, lizards, and frogs. This snake makes its home in South America. False coral snakes are found in wetlands, forests, and savannas. They use their blunt snout to burrow into the soil in their habitat.

Where to Find False Coral Snakes

The false coral snake lives in the northern portion of South America. These snakes live near bodies of water, and many are found in the Amazon Rainforest.

These snakes spend a lot of time burrowing in mud and moist soil. They also hide beneath piles of leaf litter.

Anilius scytale is the scientific name of the false coral snake. It goes by the name American pipe snake as well. The Greek word scytale translates to baton. This relates to the cylindrical shape of this snake.

It’s in the Aniliidae family and the Reptilia class.

The false coral snake is recorded as Least Concern by the IUCN Red List of Threatened Species. Its population is not known probably because of this snake’s tendency to hide underground.

How to Identify False Coral Snake: Appearance and Description

The false coral snake’s body features a pattern of narrow red and black bands running from head to tail and over its belly. Its entire body has an even width, and it measures up to 28 inches long. It has two round black eyes located on the black band of scales on this reptile’s head. This snake has a rounded red snout.

If a predator is not deterred by the colors and pattern of a false coral snake, this resourceful reptile takes another step to scare the threat away. It flattens its tail and raises it off the ground, so it looks like the hooded head of a cobra! When it comes to scaring away predators, the false coral snake can be sneaky!

How to identify a false coral snake:

False Coral Snake: How Dangerous Are They?

A false coral snake doesn’t have venom and is not considered dangerous. This snake lives beneath the ground in burrows, so it’s a rarity to see one. But, if a human does get bitten by this snake there are some steps to take to give the injury the right type of care.

First, wash the bite wound with soap and water. Put first-aid cream on the injury to prevent an infection from taking hold. Then, put a bandage over the wound to protect it from dirt and dust as it heals. If the bite wound becomes extremely red or swollen, go to a hospital or doctor’s office to get medical care.

False coral snakes have very little contact with humans. They live in rainforests, savannas, and wetlands. In fact, the total population of this snake is unknown because it is so difficult to find them.

How do false coral snakes hunt?

False coral snakes constrict their prey. Once the animal has stopped struggling, the snake starts at the head of its prey to swallow it whole. This snake’s jaw can be unhinged in order for it to swallow its prey.

No, they are timid in nature.

Where do false coral snakes live?

These snakes live in rainforests and savannas in South America. Specifically, they are in the countries of Brazil, Colombia, Ecuador, Suriname, and Venezuela.

What do false coral snakes eat?

They have a diet of lizards, small snakes, and frogs.

How much does a false coral snake cost?

The cost of this snake is around $100 to purchase depending on its age. Juvenile snakes may be a little higher in cost than older snakes.

Though these snakes need special care in the form of a temperature and light monitored enclosure, a carnivorous diet, and substrate to dig in, they are popular pets. These snakes have a lifespan of up to 15 years in captivity.

Where are false coral snakes found?

It has a rainforest, wetland, or savanna habitat. These snakes are most at home in areas with damp soil where they can make burrows.

How big are false coral snakes?

They are smaller snakes growing to a maximum of 28 inches long.

Why is it called a false coral snake?

What is the difference between a coral snake and a false coral snake?

Coral snakes have venom while false coral snakes are non-venomous. This is why it’s essential to know the differences between them.

Coral snakes are longer. They can measure three or even five feet in length. False coral snakes grow to about 28 inches in length.