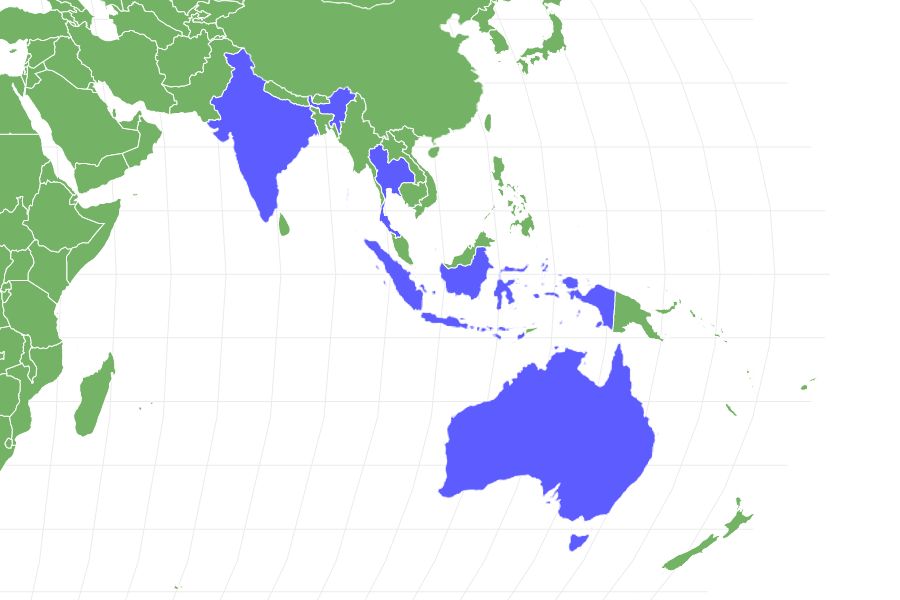 View all of our Boiga pictures in the gallery.

View all of the Boiga images!

The Boiga is a genus of snakes who are members of the Colubridae family.

They are native to Asia, Australia, and India, but they have spread to many other parts of the world. These snakes are highly adaptable and able to survive in many varied environments. Boiga snakes are mildly venomous.

• Because of their big eyes, they are also known as cat snakes or cat-eyed snakes.
• Despite being venomous, they are popular as exotic pets.
• There are more than 50 species of Boiga, and there are hundreds of sub-species.

Boigas prefer a warm, humid habitat, but they are highly adaptable. Their hardiness has ensured they are well-populated in their range.

Members of this genus make good zoo exhibits because they tend to be large and vividly colored. One example is Boiga dendrophila divergens, also known as the Luzon mangrove snake or the gold-ringed cat snake. It is a striking snake with shiny, smooth black scales and vivid yellow bands. This snake is at the Buffalo Zoo.

This snake species is part of a breeding nursery at the Moscow Zoo.

Boiga melanota, the western mangrove cat snake, is native to Thailand and one of the species that live in areas protected by national parks in Thailand. This snake is known for its glossy black background and large yellow bands. It is one of the biggest cat snake species in Asia. These national parks are also home to Boiga dendrophila divergens and several other cat snakes.

The green cat snake (Boiga cyanea) is a bright green snake with dark blue or black patches. This is another common, widespread member of the Boiga family. Boiga cyanea is native to most of Indonesia.

Since Boiga is a genus and not a specific species of snake, the name Boiga covers many different snakes. There are more than 50 species of Boiga snake, and they include:

The snake is classed as “least concern” for conservation status by the IUCN Redlist.

These snakes have decimated local rodent populations, which means trees and plants are slow to germinate. These trees depend on rodents to pollinate their seeds.

Since 2010, the Guam and United States governments have been using “mouse bombs,” which are dead mice filled with acetaminophen, a pain reliever that is deadly to the snakes. Airplanes fly overhead and drop the poisoned mice onto areas populated by the snakes.

The government also employs snake detection dogs who inspect all cargo that leaves Guam. Authorities want to make sure other islands don’t get any brown tree snakes that could have the same impact. These dog teams and their handlers work 24-hour shifts to inspect every item before it leaves the island.

In 2021, conservationists reported that these efforts were finally having some effect. Brown tree snake populations have declined. The work is ongoing, however. In 2021, the U.S. government authorized $4 million to fight the brown tree snake problem.

How To Identify Boiga: Appearance and Description

The Boiga, also known as the cat snake, is a long, slender snake with a large head. They vary greatly in appearance among species but typically have black backgrounds with bronze or yellow bands. Some are spotted, however, and others are solid in color. Their distinctive feature is that they are opisthoglyphous, which means their fangs are in the back of their heads.

Boiga snakes grow 2 to 3 feet long on average. They have large eyes and long, forked tongues.

Boigas are classed as mildly venomous. Venom toxicity, like other characteristics, varies among species, but there are no known Boiga snakes that have deadly venom. Some species, including the mangrove snake and brown tree snake, can cause swelling and pain when they bite.

These snakes tend to be striking in size and color. For this reason, they are popular among people who keep exotic snakes as pets. They also make good pets because they are hardy, adaptable, and able to handle the stress of transportation well.

Boiga snakes are not aggressive, but they will bite if they are disturbed or threatened.

The Boiga genus includes many striking snakes with vivid coloring. These snakes are members of the Colubridae family, which is the largest of all snake families. Although they are classed as mildly venomous, it’s smart to avoid their bites, which can be painful.

Boiga is the name for a genus of snakes belonging to the Colubridae family.

Yes, they are classed as mildly venomous. Their venom is not considered dangerous to humans. They are safe enough that they have become a popular pet among people who raise exotic snakes.

They are nocturnal hunters. They sleep in trees in the daytime and search for their prey at night. They use an ambush method to attack, bite and inject venom into their prey.

What type of food do they eat?

Boigas eat:
• Mice
• Rats
• Voles
• Lizards
• Birds
• Smaller snakes
In captivity, they eat the food offered by their owners. It is difficult to get them to eat a rodent-only diet, so people who keep them must give them a variety of food.

No, they are not aggressive.

Their native habitat is warm, humid, and arboreal. They live in the mangrove forests and lowland forests of Indonesia, Asia, and other parts of the world.

Can you survive a Boiga bite?

Yes, you can survive a Boiga bite.

Where do you find Boiga?

This snake is widespread in its territory. Boigas are abundant in forests, national parks, and other wild areas. You can also see them in zoos and private aquariums.

Can you own a Boiga as a pet?

Yes, you can. They make good pets because they are tough enough to survive transportation to a new location. It is important to create a habitat that mimics the snake’s preferred environment of dense tree foliage, warmth, and humidity.