Click through all of our Fin Whale images in the gallery. 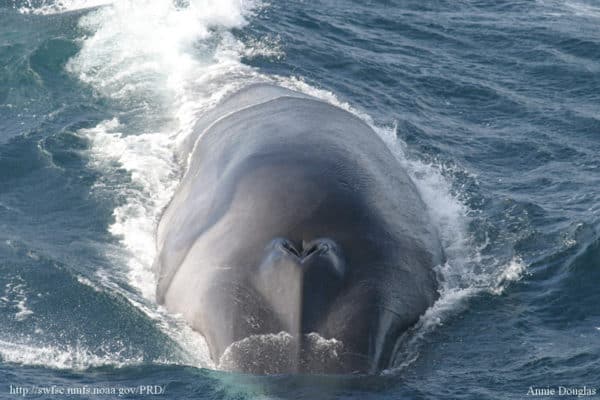 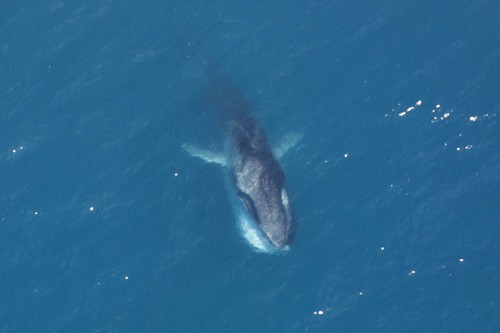 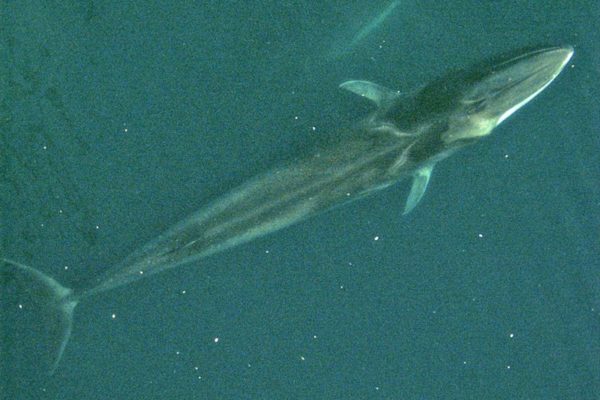 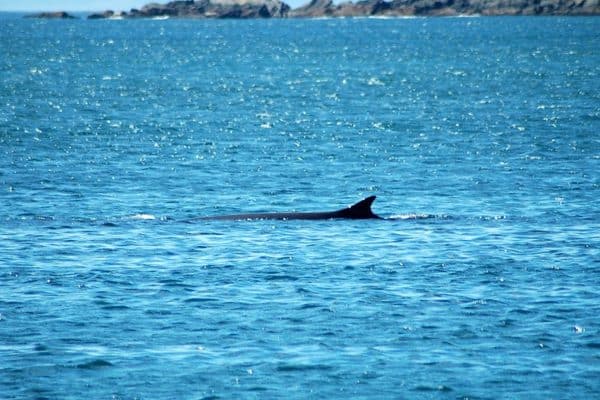 View all of the Fin Whale images!

The fin whale is one of the largest animals to ever exist on the earth.

Residing deep within the world’s great oceans, the fin whale cuts a majestic figure as it glides effortlessly through the water. Despite their enormous size, these whales are fast and agile swimmers that have adapted supremely well to their aquatic environment. Once highly endangered by human hunting, the whale is now making a slow comeback. They appear frequently enough for avid whale watchers to enjoy.

Balaenoptera physalus is the official scientific name of the fin whale. Physalus is derived from the Greek word physa, which means ‘blows ‘or a ‘blowpipe.’ This is a reference to the whale’s blowhole.

The fin whale belongs to the genus Balaenoptera, which also includes the common minke whale, blue whale, and Sei whale. The taxonomical family of Balaenopteridae, also known as the rorquals, is the largest group of baleen whales in the world. The fin whale is a type of cetacean, encompassing all whales and dolphins.

With its long, slender body, the fin whale can be distinguished from similar species by the presence of a large hooked dorsal fin on the back and a distinctive ridge running to its tail. It has a grayish or brownish coloration around its back and head, with white coloration around the belly. The markings around the head are asymmetrical – dark on the left side of the lower jaw and white on the right side. It also has two blowholes on its back.

The average fin whale is more than 65 feet in length and weighs up 80 tons, or about the weight of several semi-trucks stacked together. This makes it the second-largest whale species, eclipsed only by the truly massive blue whale. The female may be ever so slightly bigger than the male, but otherwise, they exhibit little sexual dimorphism (meaning differences between the sexes).

Fin whales are highly social creatures that travel in pods. Although they are sometimes found alone, fin whales will normally cluster together in groups of up to ten at a time. A large number of fin whales may congregate at feeding grounds, even mixing with other species of whales and deep-sea predators. The fin whale relies heavily on low-pitched sounds to communicate with each other. These sounds range between 16 Hz and 40 Hz, well outside of a human’s normal hearing range. They also produce regular pulses and rumbles at around 20 Hz. This is one of the lowest-frequency sounds of any animal on the earth. Scientists believe the sound may be related to courtship and feeding. It may also help them gather information about their surroundings.

Fin whales are capable of displaying great intelligence, compassion, playfulness, and grief. Although it is difficult to study these characteristics in the wild, scientists know that whales have a relatively large brain to body size. In absolute terms, whales in general have the largest brains of any animal on the earth. They may also have complex brain structures necessary for social intelligence and a theory of mind.

Fin whales are specially adapted to live in the water. Many of their external organs, such as the ears, evolved into the internal parts of their body to reduce drag while they are swimming. Due to their remarkable adaptations, they can dive underwater up to 1,500 feet to feed. Most of the time, however, they will remain only a few hundred feet beneath the ocean while traveling.

Like all other cetaceans, they must surface and forcefully expel air through their blowhole to breathe. They will blow out several times before making a deep dive, during which they conserve as much oxygen as possible in their blood and muscles. Their physiology changes greatly to deal with the pressure and lack of oxygen deep underwater. Scientists surmise that they even shut down certain organs in their body that are non-essential while hunting.

Fin whales are surprisingly fast for their sizes — and also some of the fastest whales on the earth. They can maintain speeds of almost 30 mph for short bursts and normal speeds of up to 25 mph. This is why fin whales have earned the nickname “the greyhound of the sea.”

Fin whales are often an integral part of the local ocean ecosystem. Their enormous bodies are home to many aquatic life forms and parasites, and when they perish, their bodies are consumed by all kinds of deep-sea animals on the ocean floor.

Except for the northern and southern extremities that remain covered in ice most of the year, the fin whale inhabits most of the world’s oceans and seas, including parts of the Mediterranean and Caribbean. It prefers cool and temperate waters, and it is somewhat less common in tropical regions. The fin whale also inhabits the coastal and shelf waters at least 200 meters or 650 feet deep.

Although some populations are in fact sedentary throughout most of the year, the fin whale is largely a migratory species, moving around the world in response to changes in the temperature and food availability. The whale’s migration patterns are not well understood, but they appear to prefer warmer climates in the fall and colder climates in the spring and summer.

The fin whale’s diet consists almost entirely of squids, crustaceans, and small fish. Tiny ubiquitous organisms such as krill and copepods are among its most common food. The fin whale has the amazing ability to expand its mouth to an immense size. When the whale begins to feed, it takes in a large amount of food and water. The whale then pushes the water back out through the baleen plates while trapping the food inside. It can eat up to two tons of food every day. Fin whales have several strategies for gathering food. One of the most common strategies is to swim around schools of fish and gather them into a single place so it can consume them all at once. It can spend several hours each day hunting.

Due to its immense size, there are almost no natural fin whale predators, but there have been a few reported anecdotes of groups of killer whale harassing or killing individuals. Without any real natural predators, fin whales are most susceptible to human activities.

Although they are now protected from whaling by international law in most places around the world, they are still in danger from vessel strikes and entanglements in nets. These accidents are fortunately rare. However, the noise of boats may confuse the whale’s communications with mates. Overfishing has also depleted vital reserves of prey from the ocean.

Although some aspects of whale mating behavior are still poorly understood, fin whales appear to form pairs during breeding season. Scientists have determined that fin whales tend to mate in temperate waters around the winter months. They do not have specific mating grounds and rely on their voices to find each other. Males chase after females and emit a low-frequency sound that travels well in the water.

Once a pair has mated, the females will carry their young for about a full year before the calf is born. The newly born calf is about 20 feet long and weighs nearly 7,000 pounds, and it knows how to swim almost immediately upon emerging from the womb. It takes another six or seven months before the mother will fully wean the calf. Because the calf cannot suckle directly, the mother must squirt the milk into its baby’s mouth. The females of the species only produce about one offspring at a time every two to three years.

Fin whales have long maturation periods. Males tend to become sexually mature at six to ten years, while females become sexually mature at seven to 12 years of age. However, it takes about 25 to 30 years in total for a fin whale to fully mature. Like humans, the fin whale can live to be 80 to 90 years old, although longer lifespans of more than a hundred years have been recorded.

Fin whales were once a common sight around the world. Hundreds of thousands of them roamed the oceans, and hunters largely ignored them because they were hard to catch. But once the appropriate technology was developed, heavy whale hunting in the 20th century greatly depleted their numbers. According to the University of Michigan’s Animal Diversity Web, more than 10,000 whales were hunted every year by the 1950s. Although protection was extended between 1976 and 1990, the whale populations dropped to a low of only 38,000 by 1997, placing it at danger of extinction.

According to the International Union for the Conservation of Nature (IUCN)‘s Red List, the current status of the fin whale is vulnerable. There are now currently about 100,000 mature individuals left in the world, and the population numbers appear to be increasing. However, it may take many more decades of careful conservation before the fin whale returns to its previous numbers.

Since the fin whale’s diet consists of mainly small sea creatures, such as krill, fish, and squid, it is considered a carnivore.

Where are fin whales found?

The fin whale is found throughout the world’s ocean. Tourists and wildlife lovers can sometimes spot these massive creatures from the shore or shallow waters. If you want to spot a fin whale in the wild, then you will need to know their migration patterns and common locations. Popular watch spots include California (where they occur throughout most of the year), New England or Eastern Canada, and the Bay of Biscay.

Why are fin whales threatened?

Fin whales were once hunted for their oil, meat, and baleen. Although the hunting has mostly ceased (Japan, Iceland, and natives in Greenland do occasionally continue to kill fin whales), population numbers have only rebounded partly since the low in the 1980s and 1990s.

How big are fin whales?

The fin whale is more than 65 feet long and up to 80 tons in weight. There are some minor variations between the average sizes of the subspecies. The southern fin whale is several feet longer than the northern fin whale, but the difference is relatively minimal.

How did fin whales evolve?

Whales evolved from even-toed ungulates — which includes deer, pigs, giraffes, sheep, and goats — starting around 50 million years ago. The predecessor of the whale was likely a small terrestrial mammal resembling a modern chevrotain, also known as a mouse deer. The closest living ancestor is likely the hippopotamus. Interestingly, fin whales have many characteristics that testify to their terrestrial origins, including a multi-chambered stomach, even though they look almost nothing like other ungulates judging by their outward appearance. Although the exact evolution of the fin whale is not understood, it is likely that the baleen whales evolved within the last 20 million years or so.

What Kingdom do Fin Whales belong to?

What phylum do Fin Whales belong to?

What class do Fin Whales belong to?

What family do Fin Whales belong to?

What order do Fin Whales belong to?

What genus do Fin Whales belong to?

What type of covering do Fin Whales have?

What is the main prey for Fin Whales?

What are some distinguishing features of Fin Whales?

Fin Whales have pointed snouts and two blowholes on the tops of their heads.

What are some predators of Fin Whales?

Predators of Fin Whales include humans and large sharks.

What is the average litter size for a Fin Whale?

The average litter size for a Fin Whale is 1.

What is an interesting fact about Fin Whales?

What is the scientific name for the Fin Whale?

The scientific name for the Fin Whale is Balaenoptera Physalus.