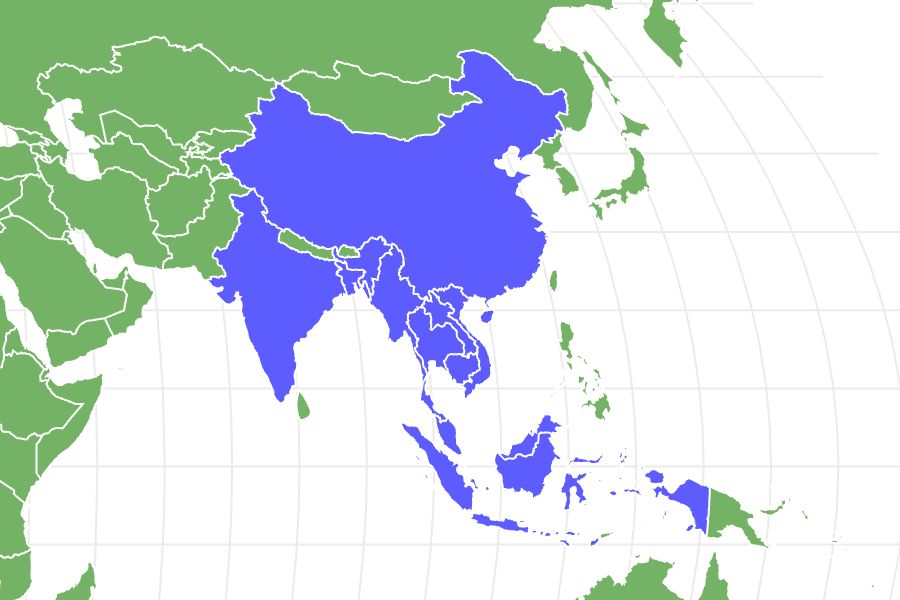 View all of our Gibbon pictures in the gallery.

View all of the Gibbon images!

Gibbons are tree-dwelling apes that live in Asia and Indonesia. Also known as lesser apes as distinct from great apes, gibbons are quick and agile, brachiating through the treetops at speeds up to 35 miles per hour (56 kph). There are 18 distinct species of this arboreal, or tree-dwelling, mammal, including white-handed, slamang, and lar gibbons. The majority of gibbon species are endangered, and some are critically endangered.

The scientific name for gibbon is Hylobatidae. The Hylobatidae ape family contains the genera Hylobates, Hoolock, Nomascus, and Symphalangus.

These are light, agile apes. Their height ranges from 15 to 36 inches (40 to 90 cm), depending on their species. The largest gibbons, the siamang, are about half the height of their human counterparts. All species have small heads and smooth, apelike faces framed with fur. Just like the great apes and unlike monkeys, they do not have tails.

One of their most noticeable features is their uncommonly long arms, which they use to brachiate through the canopies of trees that serve as their habitat. When these apes walk upright, they hold their arms up by their heads to keep their balance.

These animals have specialized wrist joints that allow them to move their hands from side to side as well as back to front. This promotes fast, efficient progress from branch to branch.

The hands and feet of these lesser apes are elongated. Each hand has a deep cleft that helps them grip strongly onto branches. The siamang gibbon, which is among the largest types of these apes, has two toes on each foot that are permanently fused together.

Their fur can be any color of brown or black, sometimes mixed with white. Their faces, feet and hands often have contrasting markings, as in the Bornean white-bearded or yellow-cheeked species.

These lesser apes spend the greater part of their lives aloft in the rainforest canopy. Their long reach and powerful legs make them the world’s greatest brachiators. They can travel quickly, spanning distances of up to 50 feet in a single leap. Occasionally, they will miss a branch or misjudge a distance between trees, and this often results in broken bones

They venture to the forest floor only occasionally. Perhaps they need to look for food or flee from another animal in the treetops. When they are on the ground, these lesser apes often travel on two feet, holding their arms above their heads to stay upright.

All the gibbon species are vocal. Their voices are musical and can travel considerable distances. They use sound to locate other gibbons, warn away intruders and woo their mates. The wooing song, often a duet with the intended mate, is known as the great call.

Siamang gibbons and other species have uniquely developed throat sacs. When the animal inhales, filling the throat sac with air, it amplifies its call through the tropical forest, helping locate other apes, mark territorial boundaries or join in a mating duet. The largest species, the siamang, has a loud voice that travels up to two miles.

In general, these primates mate for life. They live in small, nuclear families made up of a mated pair and one juvenile offspring. Although they sleep in the trees, these animals do not build nests like other apes. Once the young one matures, it ventures out to form its own family group.

These animals inhabit the rain forests of Southeast Asia in these countries:

These arboreal animals need a dense forest canopy that provides food, shelter and a means of transportation. Various species live in different regions such as mountains or valleys, but they all share a preference for treetop habitats.

These animals mostly eat fruit and vegetation that are available in the rain forest canopy. They are omnivores, however, so they do eat meat occasionally such as insects, bird eggs and small animals.

Large cats native to Southeast Asia, such as clouded leopards and tigers, prey on these lesser apes. Big snakes and eagles also pose a threat to these arboreal apes. One significant study of Maroon Langur monkeys in Borneo showed that white-bearded gibbons made warning calls to alert their own species as well as other animals like the monkeys when predators were nearby, giving them the chance to seek safety.

Humans hunt these animals in the wild to sell to zoos. People in some cultures purchase parts of the animals for healing or eating.

The biggest threat by far, however, is human encroachment on the rain forests that they call home. As civilization claims more and more of these forests, these animals have less food and rapidly shrinking habitats, which is the primary reason so many of the species are endangered.

The female gives birth to a single offspring at a time. They may have as many as six babies over the course of their breeding period. Females in the wild reach sexual maturity around eight years of age while males mature a bit later, around 10 years old. These arboreal mammals take a single mate at a time, but they may change partners once their offspring have grown up.

Female pregnancy lasts six and a half months. Once she gives birth, both parents care for the baby until it is old enough to leave home.

On average, these animals in their natural habitat live approximately 30-35 years. Those in captivity tend to live longer, up to 50 years. The longest-lived individual on record, a Mueller’s gibbon named Nippy at New Zealand’s Wellington Zoo, died at age 60.

Those species with endangered status are:

The eastern hoolock gibbon is vulnerable but not yet endangered. Skywalker hoolock and northern yellow-cheeked gibbons require further study to determine their status.

Gibbons in the Zoo

Many zoos in major US cities have these animals on exhibit. Some of the species you can see in these zoos include the lar, the siamang, and the white-cheeked gibbon. Other types of these tree-dwellers in zoos are the Javan gibbon, the eastern hoolock and the pileated gibbon.

In fact, zoos throughout the world have different gibbon species. The most common in captivity are the siamang, the white-cheeked and the lar..

What is a gibbon?

A gibbon is a lesser ape that lives in Southeast Asia. It spends its life in the rainforest canopies and swings from tree to tree. Its extra-long arms and powerful legs make it the fastest tree-dwelling mammal.

What are the smallest and the largest types of gibbons?

The smallest species is the lar gibbon. It is one of the seven dwarf species, and adults are about eight inches tall and weigh 12-13 pounds. The largest gibbon is the siamang, which grows up to three feet tall and weighs up to 26 pounds.

Gibbons are not monkeys. They do not have tails as monkeys do. Gibbons are more closely related to the great apes of Africa and Asia, but they are called lesser apes.

Gibbons normally do not pose a threat to humans. Like any animal in the wild, however, they become aggressive when they believe their family or their territory is in danger. They use their booming voices to warn off intruders.

Where do gibbons live?

Gibbons live in countries throughout Southeast Asia. Their natural habitat is the rain forest. They also live in zoos throughout the world.

Why do gibbons have long arms?

With arms half again as long as their legs, gibbons are designed to brachiate, which means swinging through the treetops. They have special wrist joints that allow rotation so they can easily twist and turn.

How many gibbons are there left on earth?

Although researchers haven’t counted all of the species of gibbons on earth, they have come up with approximate numbers for the most endangered groups:

Have they discovered any new species?

The Skywalker hoolock gibbon is a recent discovery. The first official announcement of this new gibbon came out in the American Journal of Primatology in 2017. The name Skywalker comes from Star Wars lore, but it also is appropriate to an animal that spends most of its life in the treetops.

Why do gibbons live longer in zoos than in the wild?

In the wild, gibbons have to compete for food and mates. They are at risk from predators. They can hurt themselves if they fall from the trees and must recover without medical care. It’s different in the zoo. Regular feedings and a balanced diet promote good health. They often have a mate provided for them, and they are not in danger from any predators. Even though they live in captivity, they tend to stay healthier and live longer.

What will happen to gibbons when the rain forests are gone?

Gibbons’ lives and healthy rain forests are inextricably linked. As the forests become smaller due to human activities, the number of gibbons also shrinks. However, the extinction of this unique, irreplaceable animal is not inevitable. Conservation groups like the Gibbon Conservation Center and Gibbon Conservation Alliance are working to save gibbon habitat and provide safe homes for gibbons in captivity.

Are Gibbons herbivores, carnivores, or omnivores?

Gibbons are Omnivores, meaning they eat both plants and other animals.

What Kingdom do Gibbons belong to?

Gibbons belong to the Kingdom Animalia.

What phylum do Gibbons belong to?

Gibbons belong to the phylum Chordata.

What class do Gibbons belong to?

Gibbons belong to the class Mammalia.

What family do Gibbons belong to?

Gibbons belong to the family Hylobatidae.

What order do Gibbons belong to?

Gibbons belong to the order Primates.

What genus do Gibbons belong to?

Gibbons belong to the genus Hylobates.

What type of covering do Gibbons have?

Gibbons are covered in Hair.

What is the main prey for Gibbons?

What are some predators of Gibbons?

Predators of Gibbons include leopards, snakes, and birds of prey.

How many babies do Gibbons have?

The average number of babies a Gibbon has is 1.

What is an interesting fact about Gibbons?

Gibbons are found in dense jungles and tropical forests!

What is the scientific name for the Gibbon?

The scientific name for the Gibbon is Hylobatidae.

What is the lifespan of a Gibbon?

How fast is a Gibbon?

A Gibbon can travel at speeds of up to 35 miles per hour.