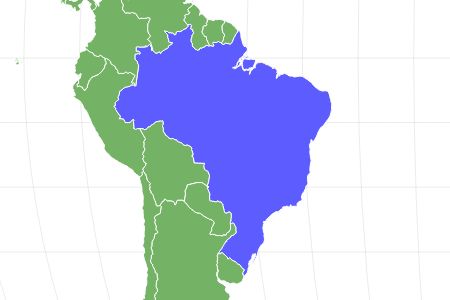 View all of our Golden Lancehead pictures in the gallery.

View all of the Golden Lancehead images!

The island-dwelling golden lancehead snake is one of the most venomous snakes in the world.

It only lives on one island 30 miles off the coast of Brazil and eats birds primarily. This is a slender pit viper with a golden color and a spearhead-shaped head. Rumors say that it caused the deaths of a lighthouse keeper and his family in the 1920s, but it’s not documented.

Where to Find Golden Lanceheads

Golden lancehead snakes only live on one island off the coast of Brazil – Ila Queimada Grande, known to most of the world as Snake Island. They live in a variety of habitats on the island, from rocky hills to subtropical forests.

Ila Queimada Grande, which translates as the Island of the Big burn, used to be connected to mainland Brazil, but at the end of the last ice age, the world’s sea levels rose and isolated it from the rest of South America. The animals trapped here suddenly had both an opportunity and a challenge.

For some reason, when the water levels rose, there weren’t any land predators or mammals. They had to change if they were to survive – and change they did!

While there weren’t any land mammals for prey, there were birds. Lots of birds. So the snakes took to the trees and developed a venom that takes them down quickly.

Fast forward 11,000 years, and you have a 106-acre island 30 miles off the coast of Brazil that is home to snakes, birds, insects, and little else. Golden lanceheads only live in the forested part, an area of about 63 acres.

Today, the only people allowed to visit the island are the Brazilian military, who maintain the lighthouse, and researchers with special permission from the Brazilian government.

This snake’s scientific name describes both the type of snake and where they live. Bothrops is Greek and means pit face, while insularis means island; fitting, as they live on an island.

Their common name, golden lancehead, refers to their head shape and color. These snakes have a golden belly and a spearhead-shaped head. All 40-plus lancehead species have heads of this shape. An earlier French name for the genus, fer-de-lance, means the same, but scientists now apply it to only a couple of species.

The golden lancehead snakes have a population of between 2,000 and 4,000 on Snake Island. This is the only place in the world you’ll find these snakes, and in light of this fact, they’re on the IUCN Redlist as Critically Endangered.

At one point, people burned the vegetation on the island to try to kill off the snakes and start a banana plantation. Unfortunately for them, the snakes hid in crevices until the flames died down. The snake population suffered, and the areas that burned are growing back, but it may yet be decades before the forests recover completely.

Brazilian military maintains a lighthouse on the island, and they have removed a lot of the trees and vegetation where the snakes hide. This did some damage to the population, but it’s the poachers who are the biggest unknown.

Some scientists believe that poachers are doing the most damage to the population. Golden lancehead snakes are so valuable in the illegal pet trade and scientific research that poachers visit the island illegally to try to capture and sell them. One specimen can come with a paycheck of $10,000 to $30,000, depending upon the age and health. To some smugglers, that’s a worthy payoff for the risk of an agonizing death.

However, studies aren’t conclusive because snake populations are difficult to accurately observe. A study published in 2014 concluded that their primary challenges to survival are food and reproduction. They observed that males seemed to have a higher survival rate than females and believe it may be due to the higher quantity of resources that females require for breeding.

These snakes measure between two and four feet as adults. There isn’t much data on juveniles; however, their closest relative, the yarara (B. jararaca), produces offspring that average about 12 inches long. So, this seems like a reasonable estimate.

They are slender snakes, and the golden lanceheads’ color ranges from yellowish to light golden brown with darker irregular markings along the length of their back. Their markings are mostly triangular, with somewhat squarish markings interspersed in between. These snakes have a sharply angular head that is reminiscent of a spearhead (hence its name), and yellow-gold eyes with elliptical pupils.

This snake is one of the most venomous species in the world. While no one on record has ever died from a bite from a golden lancehead, scientists estimate that an untreated bite may carry a 7% fatality rate. They base this on the mortality rate for other lancehead species bites.

Golden lancehead snakes evolved a highly toxic and fast-acting venom. Some say that it melts human flesh, but this is most likely an exaggeration. However, according to research, it is up to 5% more toxic than that of its mainland cousins.

Their venom contains hemotoxic venom that helps the snake digest their food. It causes pain and swelling around the bite, nausea and vomiting, blood in the vomit and urine, bruising, intestinal bleeding, kidney failure, brain hemorrhage, and severe death of muscular tissue. Some say that those bitten and envenomated by a golden lancehead snake could die within six hours.

Venom from this snake and other venomous snakes is valuable to scientists. Several medical advancements have come from research performed on snake venom. Researchers believe that this species holds even more promise for medical research.

This snake eats primarily birds, but younger snakes may also eat smaller prey such as lizards or nestlings. Most often, golden lancehead snakes eat tyrant flycatchers, a passerine bird on the island. There’s some evidence, based on damaged tails and observed behavior, that the species uses some form of caudal luring to entice their prey close enough to strike.

Due to the isolated nature of the golden lancehead population, human interactions are exceedingly rare, and almost always intentional (either researchers or poachers).

Where do golden lancehead snakes live?

These snakes only live on one small island off the coast of Brazil the locals call Ila Queimada Grande, which most people call Snake Island.

How do golden lancehead snakes hunt?

How dangerous are golden lancehead snakes?

Very. Scientists say their venom is up to 5 times more toxic than that of their mainland cousin, the yarara. Lanceheads in South America cause more than 90% of all snakebite fatalities.

What do golden lancehead snakes eat?

Young golden lanceheads eat small lizards and invertebrates, as they grow, they graduate to birds. Their favorite food seems to be the tyrant flycatcher.

What are the key differences between a golden lancehead and a king cobra?

The key differences between a golden lancehead and a king cobra are their size, location, and colors.

What are the differences between a golden lancehead and a black mamba?

The key differences between a golden lancehead and a black mamba are size, color, location, and type of venom they use.

What are the key differences between golden lanceheads and inland taipans?

The key differences between golden lanceheads and inland taipans are their venom potency, size, and colors.

What are the differences between a golden lancehead and a pit viper?

The greatest differences between a golden lancehead and pit vipers are their size, venom, and colors.

Golden lanceheads are small snakes measuring just 4ft long, have a potent venom that can kill many humans, and are known for their yellow skin. Other pit vipers can grow over 10ft long, possess earthy colors, and have deadlier venom with several times the mortality rate.