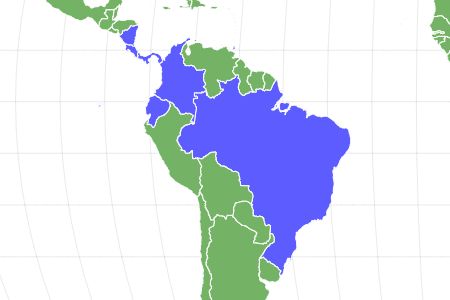 View all of our Bushmaster Snake pictures in the gallery.

View all of the Bushmaster Snake images!

The bushmaster is a beautiful snake, large in size, with dark blotches or rhomboids over lighter colored, often beaded scales, but it is as deadly as it is beautiful. Though its venom may not be as potent as that of other vipers, it can deliver a lot of it through fangs that can be as long as two inches. Not only that, the snake will actually rear up and chase you if you make it mad enough! Read on for more information about the Lachesis pit viper.

Here are four amazing facts about these reptile predators.

Where To Find the Bushmaster

The Lachesis pit viper lives in Central America, northern South America, and Trinidad. It prefers a moist, warm, old-growth forest habitat in a location that gives it easy access to fresh water.

Bushmaster snakes belong to the Lachesis genus. This genus was named after Lachesis, one of the Three Fates. These were Greek goddesses who spun out, measured, and eventually snipped the thread of a person’s life. Lachesis was the Fate who determined how long life was going to be. There are four bushmaster species:

The Four Different Types of Bushmaster

L. acrochorda can be found in Panama and northern South America, mostly in Colombia and Ecuador. Its called the Chocoan bushmaster because it is found in the Chocó Department of Colombia. Identification can be made through the “warty” scales on its belly. It can grow as long as 7.68 feet.

The Puntarenas province of Costa Rica is the location of L. melanocephala, the black-headed bushmaster. The size of this snake ranges from 7.62 to 6.6 feet, but it can grow as long as 7.9 feet. It gets its name for the black patch on the top of the head.

L. muta is the South American or Atlantic bushmaster. This snake is also found in Trinidad and has two subspecies, including the nominate species. They are L. muta muta, which is found in northern South America and Costa Rica, and Trinidad and L. muta rhombeata, which is found in Brazil’s Atlantic Forest. This snake is the largest in size of the bushmasters and has been known to grow to 12 feet. Indeed, L. muta is the longest venomous snake in the New World and the third-longest venomous snake on the planet. Only the black mamba and the king cobra are longer.

Identification of L. muta can be had from its wide head, round snout, and narrow neck. Its colors are grayish-brown, yellow, or red ground with black or dark brown upside-down triangles or rhomboids with pale interiors on the back.

Once thought to be the same species as L. muta, Lachesis stenophrys is the Central American bushmaster. It gets its specific name from the Greek words meaning “narrow eyebrow” due to the stripes on the scales behind its eyes. It is found in the tropical rainforests and wet mountain forests of Nicaragua, Panama, and Costa Rica. Its colors are much like those of L. muta.

Though the exact number of Lachesis pit vipers is unknown, their conservation status is unassessed by the IUCN Red List. However, some biologists believe these snakes are vulnerable because of the destruction of their habitat.

The bushmaster is a large snake that grows from six to 12 feet in length. It has a pattern of dark triangles, diamonds, or rhomboids along its back against a lighter ground of orange, pinkish-tan, or yellow. It has a ridge of dorsal spines down its back. The black stripe that runs behind each eye is found on all of the species and not just L. stenophrys, and the tail ends in a short spike. The snake has pits in its face that allow it to sense heat. This gives it the name “pit viper.”

The scales of the snake are small and range in texture from almost smooth to tuberculate, which means they resemble beads and contribute to the snake’s overall beauty. Identification of each species is sometimes done by counting the ventral scales. L. stenophrys, for example, has 191 to 209 of these scales, while L. acrochorda has between 202 and 228.

Which Snake Is More Venomous: The Fer de Lance or Bushmaster?

When it comes to the strength of their venom, the bushmaster has a slight edge on the fer de lance, another snake with impressive fangs. On the other hand, the fer de lance kills more people. Venom effects of a fer de lance bite include nausea and vomiting, headache, necrosis around the bitten area, a rapid heartbeat, and internal and external bleeding. The area around the bite swells up grotesquely. This happens with surprising speed after the person is envenomated. Eventually, the blood pressure crashes, and the person succumbs to kidney failure.

Venom effects of the bushmaster are similar, as the venom also affects the blood. A Lachesis pit viper is potentially more dangerous because it delivers a large amount of venom with each bite and will actually chase after a person who annoys it.

For all their beauty, bushmasters are very dangerous snakes. They bite repeatedly, at great speed, and their bites deliver large amounts of venom that attack both the circulatory and nervous systems. Venom effects are pain and swelling where the person was bitten followed by diarrhea, nausea, vomiting, sweating, slow heartbeat, and abdominal pain. If an antivenin isn’t administered, the person can go into shock, their blood pressure can crash, and they can suffer cardiac arrest.

Bushmasters are solitary outside of the breeding season, and they are crepuscular or nocturnal. They mostly live on the ground. Their diet is made up of small rodents, birds, amphibians, and other reptiles. The bushmaster does not chase down its prey but simply finds a location with a large prey animal population and waits for one to walk within striking distance.

As an adult, this large and venomous snake has few predators save for humans, though juveniles may fall prey to birds of prey or larger snakes.

Bushmasters breed all through the year, and females lay eggs, which is unusual for a pit viper. After laying five to 19 eggs in an abandoned burrow, she’ll coil herself around them and defend them. The babies hatch after about 60 to 79 days, and during that time their mother doesn’t eat but may leave the nest to get a drink of water. The colors of the hatchlings are brighter than those of their parents, and they won’t get the adult livery until they’re about one or two. They’re ready to breed themselves when they’re around four years old. The lifespan of the snake can be as much as 24 years.

Like the great majority of snakes, bushmasters are valuable because as predators they keep down the population of rodent pests. Their venom may also have medical uses. Of course, the potency of the snake’s venom and its aggressiveness makes it greatly feared even though it doesn’t kill as many people as the fer de lance.

Bushmasters are quite venomous. Their venom attacks the circulatory and nervous systems and can lead to death if the person isn’t treated.

How do bushmasters hunt?

Bushmasters don’t hunt but wait for prey to come within striking distance.

Bushmasters can be aggressive, especially if they are defending their eggs.

Where do bushmasters live?

Bushmasters live in Central and South America and Trinidad in the Caribbean.

What do bushmasters eat?

Small mammals, amphibians, birds, and reptiles make up much of the snake’s diet.

How deadly is a bushmaster snake?

Will a bushmaster snake chase you?

A bushmaster snake might indeed chase you for some feet if you make it angry.

What happens if you get bit by a bushmaster snake?

If you get bit by a member of the Lachesis genus, call for medical help immediately. Do not apply ice to the location of the bite and do not cut into it or try to suck out the venom though you can try a pump extractor. Apply a constricting band around the limb between the bite and the heart, but make sure not to cut off circulation. Rest the limb below the level of the heart.

What is a bushmaster snake?

Where does the bushmaster snake live?

These snakes live in the wet, tropical old forest habitats of Trinidad and Central and South America.