B. asper, B. atrox, B. lanceolatus

The Most Dangerous Snake in the Americas 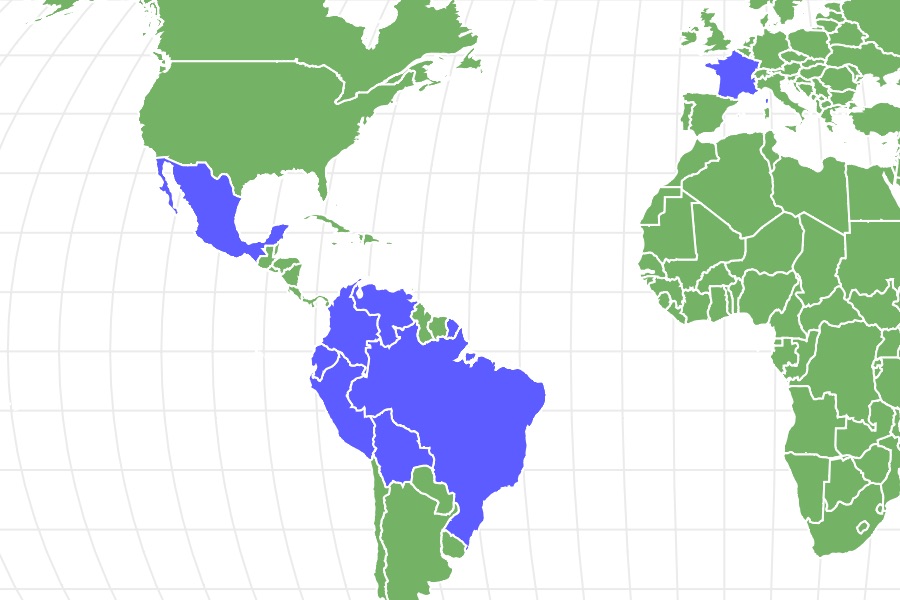 View all of our Fer-de-lance Snake pictures in the gallery.

View all of the Fer-de-lance Snake images!

“The Most Dangerous Snake in the Americas”

Camouflage helps these snakes hide from potential prey as well as potential predators, but it also hides them from barefoot people out for a walk. Unlike some snakes, this pit viper minds being stepped on, and while it may start to move away from the offending foot, it might just as easily change its mind and bite. Still, like all snakes, fer-de-lance snakes are fascinating beasts. Read on to learn more about them.

B. lanceolatus is only found in Martinique, a Caribbean island that is part of France, though at least two of these snakes have been found in Guadeloupe. B. atrox, the common lancehead is found in the tropics of south and east Venezuela and southeastern Colombia. It’s also found Trinidad, French Guiana, Ecuador, Peru, Bolivia and northern Brazil.

B. asper, called the terciopelo is found in Central America and eastern Mexico and south to Colombia, Ecuador, Venezuela, and Peru.

The snakes live in a wide range of habitats, including tropical rain and evergreen forests, savannas, cloud forests, the lower slopes of mountains and even deserts. They are seen in cultivated areas that are also the homes of their rodent prey.

Fer-de-lance snakes from the New World are members of the Bothrops genus. The meaning of Bothrops is something like “pit eye” and comes from the Greek words bothrops, or “pit” and ops or eye. It refers to the heat-seeking pit organ between the eye and the nostril in the snake’s head.

Lanceolatus is Latin for “lance-shaped.” This describes the shape of the snake’s head. The meaning of atrox is “cruel, severe, dreadful” in Latin and the meaning of asper is “rough” or “harsh.” This word is also Latin. Asper and atrox probably describe the effects of the venom if a person gets bitten by one of these snakes.

None of these snakes have subspecies.

The Different Types of Fer-de-Lance

If you believe that every snake found in the Bothrops genus is a type of fer-de-lance, then they have several things in common. They have the long head that comes to a point that gives them the name “lance head” and a notably sharp ridge between the flat top of their head and the area between their eye and their snout. They have three to 14 scales at the top of their head. The middle of the back can have 21 to 29 rows of scales, while there are between 139 and 240 scales on the belly and 30 to 86 scales on the underside of the tail. They can grow from 19.5 inches to over 8 feet in length. Every one of them is dangerously venomous and endemic to Mexico and Central and South America.

Fer-de-lances are usually shades of earth colors such as brown, gray, yellow, olive, and black with often geometric blotches at the sides and top of the body. The two-striped forest-pitviper, Bothrops bilineatus is an exception as it is mostly pale green with small black spots. The conservation status of these snakes ranges from not evaluated to critically endangered in the case of the golden lancehead, B. insularis.

According to the IUCN Red List, B. lanceolatus’ conservation status is endangered. B. atrox is common and listed as least concern, and so is B. asper’s population as evaluated by the IUCN Red List.

How To Identify Fer-de-Lance: Appearance and Description

B. lanceolatus can grow to about 5 feet long and has brown and black splotches on a gray ground. B. atrox can have a variety of ground colors, including brown, olive, gray, or green with undertones of rust or yellow. It sports dark triangles with pale edges whose points meet in the middle of the snake’s back. It can grow as long as 6.5 feet.

The terciopelo’s head is wider and flatter than the heads of the other snakes, and it has distinct “eyelids.” Its head is dark brown to black, with a pale yellow, cream or white belly. Like the other snakes, it has triangular blotches that grow denser toward its tail and may have a yellow zig-zag down each side. Females are much bigger and heavier than males and have more scales. A very large terciopelo can be over 8 feet long and weigh over 13 pounds.

Fer-de-Lance Venom: How Dangerous Are They?

Fer-de-lances are exceedingly dangerous snakes. The terciopelo is responsible for more snakebite deaths than any other snake in the area where it lives. The common lancehead, which is often found on farms is feared for both its venom and its aggressiveness, even as it eats vermin. B. lanceolatus, though endangered, is also known to be aggressive. The venom of these snakes are complex mixes of toxins that attack the blood and cause hemorrhaging, edema, extreme pain and necrosis that can lead to cardiovascular shock and kidney failure.

Though fer-de-lance snakes do pose a danger to humans, they are also beneficial in that they eat vermin such as rats and mice. Their venom is also collected and studied to see if it can have some pharmacological use. The venom of these snakes is already used to produce anti-venom to treat snake bites and save the lives and limbs of victims.

Fer-de-lances don’t hunt so much as they lie in wait for their favorite prey to come within striking distance. The heat-sensing pits in their head tell them when prey is nearby. This is why so many people are bitten by these snakes. They are well camouflaged on unpaved roads and paths and people inadvertently step on them.

These snakes are known to be very aggressive if they’re annoyed. They’re not only aggressive but unpredictable. It may look like the snake is moving away, but then it may turn and attack.

Fer-de-lances live in Mexico and Central and South America in a variety of habitats, including rainforests and even deserts.

When these snakes are young their diet is made up of arthropods such as spiders, insects and lizards. As they grow their diet expands to include small mammals, birds, amphibians and snakes that are smaller than they are.

What is a fer-de-Lance?

A fer-de-lance is a very venomous snake that is only found in Mexico and points south in a variety of habitats, including farms. It is a danger to people because it lives so close to human habitations.

How venomous is a fer-de-Lance?

The terciopelo can inject as much as 1530 milligrams of venom in a bite, and a bite with that much venom can probably kill 32 people.

How deadly is a fer-de-lance?

The death rate for people who do not receive anti-venom after they’re bitten by a fer-de-lance is about 7 to 9 percent. But even if you don’t die, the bite can cause such severe necrosis in a limb that you may need to get that limb amputated.

Why is it called a fer-de-lance?

It is called that because its head resembles the tip of a spear.

Can you eat a fer-de-lance snake?

No, fer-de-lances are not edible.

How fast can a fer-de-lance kill you?

How fast you die after a fer de lance bites you depends on how much venom the snake injected. Some snakes don’t inject any venom when they bite, and these bites are described as “dry.” Still, time is of the essence, and you should seek medical help right away if you’re bitten by a fer-de-lance. It’s possible to feel symptoms such as pain, swelling and nausea within 15 minutes after envenomation.

What's the difference between a fer-de-lance and a golden lancehead?