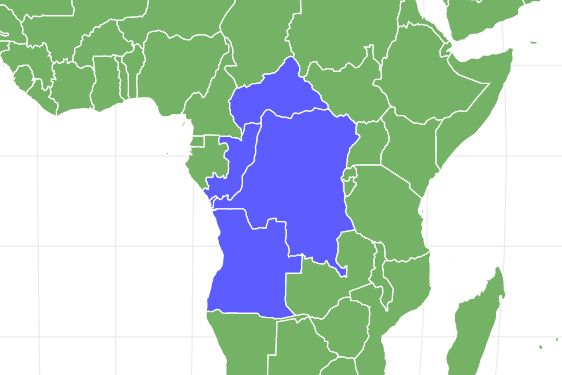 View all of our Goliath Tigerfish pictures in the gallery.

View all of the Goliath Tigerfish images!

Some people call the Goliath Tigerfish a “fish on steroids” or the African version of the piranha.

Whatever you call it, the Goliath tigerfish is one scary animal. These strong fish are considered demon fish by some African tribespeople. While some aquarists keep them as exotic pets, it’s best to know how to handle them before taking the plunge.

Goliath tigerfish are the largest members of the five species in the genus Hydrocynus. The first part of its scientific name, Hydrocynus goliath, comes from Greek, meaning hydro (water) and kyon (dog). However, some French-speaking African cultures call this fish Poisson Chien (dogfish) instead of tigerfish.

Goliath tigerfish are primarily olive on top and silvery on the bottom, but you will also find gradations of yellow, brown, and gray with a golden appearance around their faces. They also have an upright dorsal fin and three smaller fins below their bellies. Fully grown tigerfish are four to five feet long and weigh 90 to 100 pounds. Each tooth in the Goliath tigerfish’s mouth can be up to seven inches long, rivaling the size of teeth in many sharks.

This tigerfish species lives in larger rivers and lakes in the Congo River basin, including Lualaba River, Lake Upemba, and Lake Tanganyika. Africa is their sole habitat. Their exact population is unknown, but as they are numerous in their native habitat, their conservation status is of least concern.

Experts recommend that only experienced aquarists keep Goliath tigerfish as pets in a home aquarium because of their aggressiveness. They are usually sold as juveniles, only three to six inches long, yet they require a large tank to grow properly. As these fish mature, you may have to eventually move them from an aquarium to a pond. Nevertheless, they won’t reach their biggest size as they would in the wild. You should not keep Goliath tigerfish with other smaller fish as they will view their tank mates as food and eat them. They require water that is well oxygenated with a moderate to strong current as they are sensitive to water quality.

Goliath tigerfish are apex predators, meaning they have few animals who hunt them. When hunting, Goliath tigerfish use calmer eddies of rivers and lakes to ambush their prey. While these fish use their keen sight to detect their meals, they also have a unique ability to detect low-level frequencies allowing them to sense when prey is nearby. Scientists also believe these fish use their powerful bite force to stun and kill their prey. They don’t use their massive teeth for chewing. Once they kill their prey, they swallow it whole. They hunt catfish, angelfish, cichlids, and gobies.

Not much is known about how Goliath tigerfish reproduce as scientists have not studied the species extensively. They usually spawn during summer when they find suitable breeding grounds, usually flooded riverbanks, and shore. When they find a suitable spawning ground, female Goliath tigerfish can release up to 780,000 eggs at once. They tend to hide their nests in underwater vegetation, indicating juvenile tigerfish vulnerability. The hatchlings stay there until water levels force them out. Baby tigerfish feed on plankton and slowly graduate to larger prey as they get older. Goliath tigerfish grow slowly at only four to six inches per year, so they can take up to 10 years to reach their full size. Breeding them in an aquarium is virtually impossible, so all Goliath tigerfish sold as pets are caught in the wild.

Goliath Tigerfish in Fishing and Cooking

Goliath tigerfish are considered a sportfishing species primarily. However, these giant fish can feed an entire African village when caught for food. They are whitefish, so their meat is tender and tasty. They are often grilled, fried, baked, and prepared in a similar manner to tilapia. Goliath tigerfish are strong fighters considered to be prized gamefish. They take almost any kind of bait and repeatedly jump when hooked, so a wire leader is necessary due to their sharp teeth.

There are no specific figures on how many Goliath tigerfish exist in the wild. However, as their IUCN (Internation Union for Conservation of Nature) red list status is of least concern, one can assume that there are sufficient numbers of these fish in the wild. However, at the same time, local officials in Africa advise sport fishers to release Goliath tigerfish when possible.

How big do Goliath tigerfish get?

As the largest member of the tigerfish family, they can reach a length of four to five feet and weigh as much as 90-100 pounds.

Is the Goliath tigerfish a piranha?

Goliath tigerfish are often considered a bigger and deadlier version of the piranha, yet they are two different species that are distantly related.

What is the biggest Goliath tigerfish ever caught?

The largest one on record weighed 154 pounds.

What do Goliath tigerfish eat?

Goliath tigerfish are piscivores, meaning they will eat other fish. In the wild, they eat catfish, angelfish, carp, cichlids, and gobies.