Click through all of our Grouse images in the gallery. 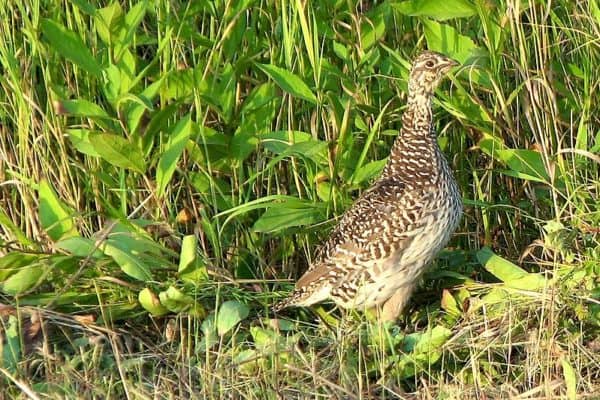 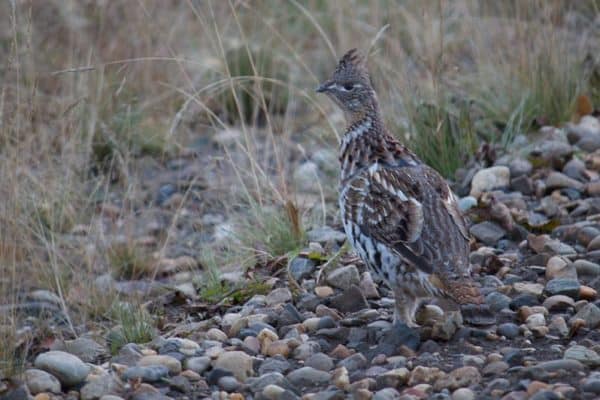 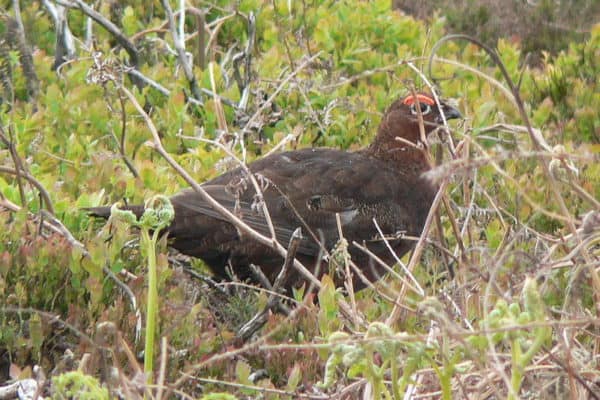 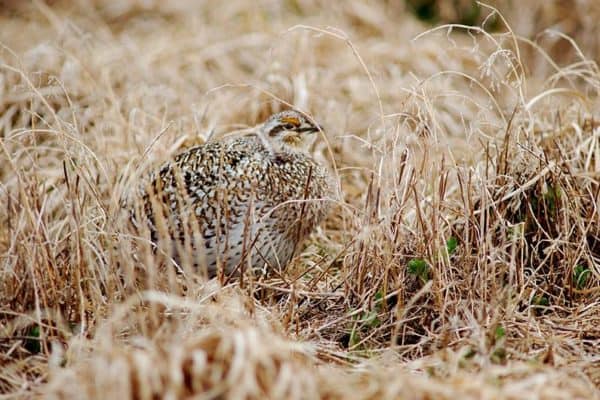 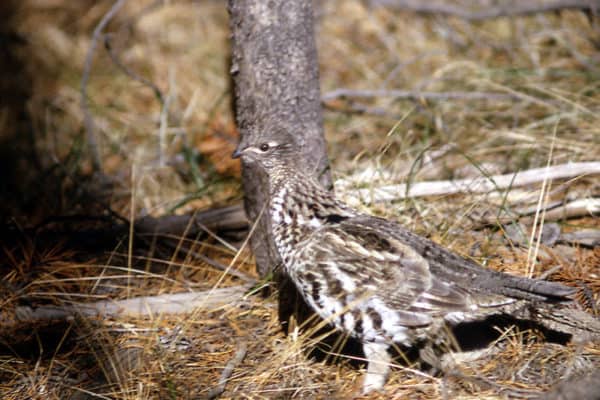 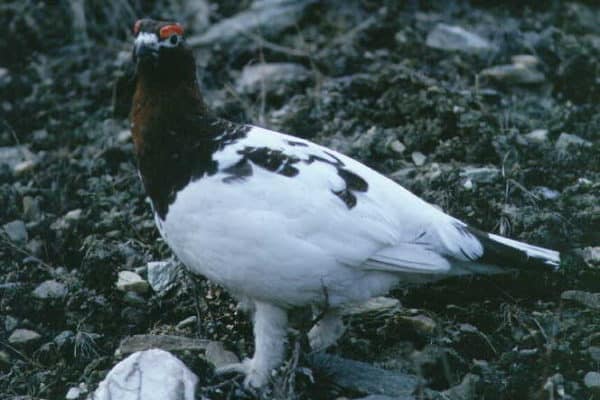 View all of the Grouse images!

A bird species with feathers on nostrils, legs, and feet!

Grouse are medium sized, stocky birds that live in the Northern Hemisphere. Their feathers closely resemble their habitat. This plumage provides them with camouflage and helps them survive. Grouse are closely related to chickens, turkeys and pheasants. About eight million of these upland game birds are hunted each year for food or sport in their grassy and forested habitat.

Grouse are part of the order Galliformes and the family Phasianidae. The bird’s scientific name is Tetraoninae. This name comes from the Latin word tetrao-, meaning “a kind of gamebird” and -idae, from the ancient Greek term for “appearance.”

There are about 10 species of grouse in the United States and Canada. These include the blue grouse, spruce grouse, ruffed grouse, sharp-tailed grouse and sage grouse. Also included are the greater and lesser prairie chickens, willow ptarmigan, rock ptarmigan and white-tailed ptarmigan.

Grouse are plump birds that primarily thrive on the ground, where they nest in tall grasses and other ground cover. They can glide in the air for short distances when alarmed and to get away from predators. Their brown, gray and red feathers protect the birds from weather and disguise them in their surroundings. Feathers grow over their nostrils, legs and toes to help them stay warm and travel over snow. The birds also have thick necks, long legs and short, hooked beaks.

Most grouse grow only to as many as 30 centimeters in height. But the wood grouse of Europe and Asia can grow as large as 100 centimeters. The biggest North American grouse is the sage grouse, often growing to 62 to 70 centimeters. This is smaller than geese and about the same size as a chicken. Males are usually twice as large as females in adulthood.

Forest grouse live mostly alone and with their chicks. A hen’s nest of eggs or group of chicks is called a clutch. Prairie grouse are more social and do not mind meeting each other in their habitat. In fall and winter, arctic and tundra-dwelling grouse form flocks of up to 100 birds. Most males mate with multiple females, except for the willow grouse that takes only one mate at a time.

One or more types of grouse live in most types of habitat in North America. In the United States, they inhabit everywhere from the subarctic regions of Alaska to the prairies of Texas. Grouse live in tundra, heathlands, grasslands, temperate forest and boreal forest. Some species of grouse also live in Europe and Asia. This bird family is also called upland gamebirds, as they do not dwell in the watery habitats of wetland gamebirds, such as ducks and geese.

Depending on where they live, grouse usually either nest in tall grasses or on the floor of forests. Grouse living in snowy regions dive and burrow under the snow to live. Their body heat helps them create a nicely packed, igloo-like shelter that stays warmer than the outside air.

Male grouse typically maintain a territory of between 10 and 50 acres. They do not want other males around. Female grouse wander on about 100 acres. Females do not mind other grouse on the same land.

Grouse are mostly non-migratory. This means they live in one habitat year-round. But the ptarmigan or snow grouse migrates to northwestern states or lower elevations during winter from their warm-season arctic habitat.

Grouse are widely hunted for their meat. In North America and Europe, it is a common practice for hunting groups to farm grouse by giving the birds land to thrive. These semi-protected habitats provide space for hunters to track and “flush out” individual mature birds during a hunt.

Some species of grouse enjoy eating evergreen tree needles. Many forests give them an endless supply of these needles that other creatures ignore. The sage grouse only eats sagebrush in winter and shelters beneath it. In warm months, sage is a major part of their diet, too.

Grouse purposefully eat sand or other grit at times. This helps them digest some of the rough plants they eat.

Grouse thrive in harsh winters where many other birds do not. They also have plump, meaty bodies that make a great meal for humans and animals. This makes the birds attractive to many four-legged predators. These include foxes, wolves, wildcats and lynx. Large birds of prey also eat grouse and snakes eat their eggs.

Humans hunt about eight million grouse each year in America, alone. Luckily, many of these hunts take place on lands where farmers hatch grouse to add more to the population. In the wild, grouse have large clutches, meaning many eggs and chicks to each mother. This helps keep hunters from causing the birds to go extinct.

Habitat loss happens when people build cities where forests, prairies or grass lands once existed. This pushes the birds out of their natural lands and to less suitable places where they cannot thrive. Farming and forest fires also take away their habitat.

Scientists are working on ways to help grouse keep their habitat. One of the biggest ways to help them is in how we preserve forests and regrow trees.

Male grouse of all species except one mate with multiple females at once. It is only the willow grouse that has one mate per season. To compete for their mates, male grouse perform courtship displays at dawn and dusk each spring. They dance and strut, fluff their feathers and drum their wings on fallen logs. Male sage grouse and prairie chickens inflate a brightly colored neck air sac to show off for females, too. Sometimes the males fight to compete for females.

Females build their nests in the ground. They find a natural dip in the ground’s surface sheltered by ground cover like grasses or sagebrush. They line this nest with plant materials, such as leaves and twigs.

About a week after mating, female grouse starts laying eggs that look like smaller chicken eggs. She lays only one for each day or two. She can replace lost or broken eggs with new ones. When she is done, she has a clutch of between five to 12 eggs. If all goes well, each of these hatch 21 to 28 days later.

Chicks leave the nest right after hatching. The mother grouse stands guard over her brood. The mother protects the young from predators and other threats. She takes them to good places for foraging for food, where the chicks must find their own plant or insect meals. Male willow grouse help their mates protect their babies. But for other species, the males do not take care of the young.

By the time the chicks are two weeks old, they have wings and can fly in little bursts. But they stay in the nest and around their mother until they reach adult size and weight in autumn. That is at about 12 weeks of age.

Grouse can first mate when they are a few years old. Most North American grouse live for seven or eight years in the wild. Some live as long as 11 years. But cold weather and disease can kill as many as three in every four young grouse each year.

From season to season and year to year, the number of grouse living in the world varies widely. Harsh winters, unfavorable seasons, or disease can cause the population to decrease by thousands. After each hunting season, there are millions of fewer birds than just in the months before. But grouse bounce back well. They have many eggs in their clutch and can nest a second time in a mating season, if the first set of eggs are lost.

In North America, there are about 15 grouse per mile of land. The sage grouse is most vulnerable to habitat loss in America. There are only eight million sage grouse in the U.S. today. While it is not listed as endangered, the sage grouse is a “near threatened” species. In 2019, an order by the Trump administration opened up sage grouse habitat in the western United States to oil drilling. This action threatens the habitat of millions of Sage Grouse, and many scientists expect the drilling to cause the sage grouse to go extinct.

View all 46 animals that start with G

Is the grouse an herbivore, omnivore or carnivore?

Grouse is a hunted bird. It is not farmed for food. Its meat is both dark and white like chicken or turkey. But it does not taste like these farmed birds. Instead, it tastes gamey or wild, taking on the flavor of much of what the bird eats. It is not as fatty as duck or goose.When cooked, a grouse looks very much like a small cooked chicken. You can season and enjoy a grouse like any other poultry. But it is best prepared in stew, a mix of other fowl, as a pot pie, roasted, barbecued or in casserole. The meat is not tender and older grouse can be quite chewy. Most chefs try to bring many other flavors into their grouse dishes to make the meal taste less gamey.

Are pheasants and grouse the same?

Grouse and pheasants come from the same order and family of birds. They are like cousins of each other, but not of the same species. Although many pheasants live in other countries like the U.S., they are not native to lands outside of Asia. Grouse are native to the North American continent and other parts of the world, including Europe and Asia.Pheasants and grouse have similar diets of plants and insects. They are both hunted meats that humans enjoy eating. Both birds have red, brown and gray variations of their feathers. But male pheasants has much more “showy” feathers than male grouse. They show off some vibrant markings and have very long tail feathers.

What Kingdom do Grouse belong to?

Grouse belong to the Kingdom Animalia.

What phylum do Grouse belong to?

Grouse belong to the phylum Chordata.

What class do Grouse belong to?

Grouse belong to the class Aves.

What family do Grouse belong to?

Grouse belong to the family Phasianidae.

What order do Grouse belong to?

Grouse belong to the order Galliformes.

What genus do Grouse belong to?

Grouse belong to the genus Tetraoninae.

What type of covering do Grouse have?

Grouse are covered in Feathers.

In what type of habitat do Grouse live?

What are some distinguishing features of Grouse?

Grouse have long tail feathers and feathered legs and toes.

What do Grouse eat?

What are some predators of Grouse?

Predators of Grouse include foxes, lynx, and birds of prey.

What is the average clutch size of a Grouse?

What is an interesting fact about Grouse?

Grouse have feathered legs and toes!

What is the scientific name for the Grouse?

The scientific name for the Grouse is Tetraoninae.