Click through all of our Pheasant images in the gallery. 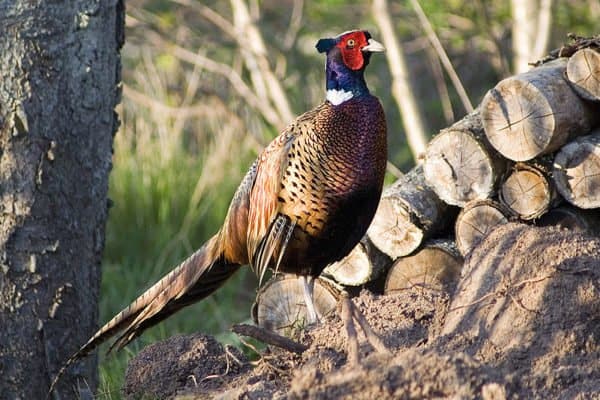 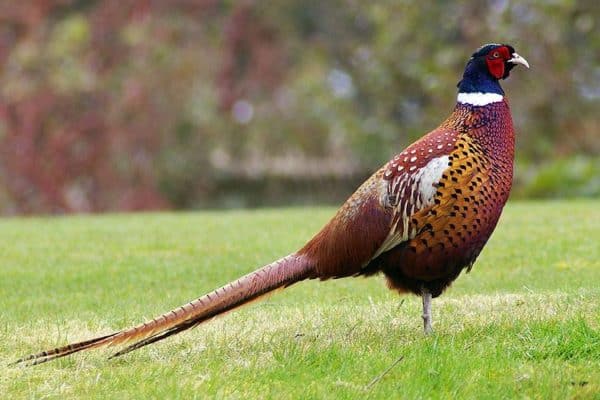 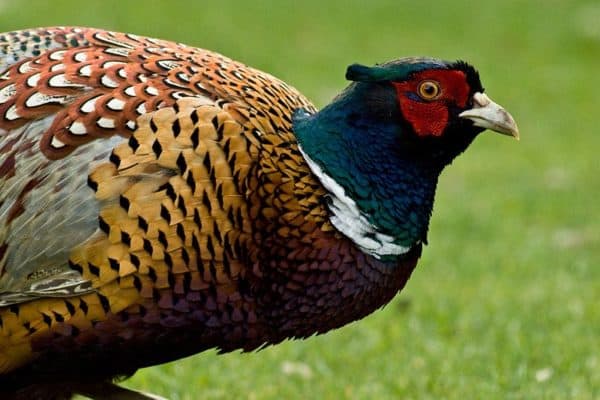 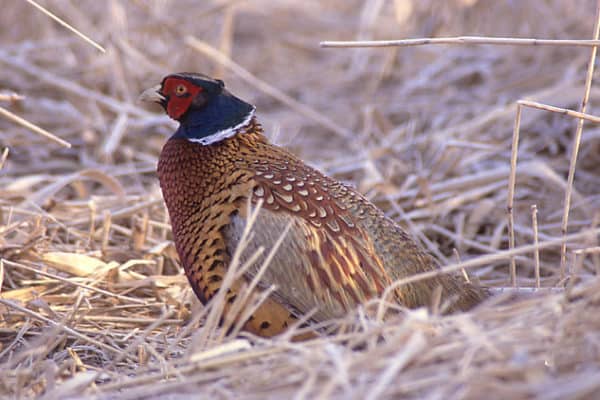 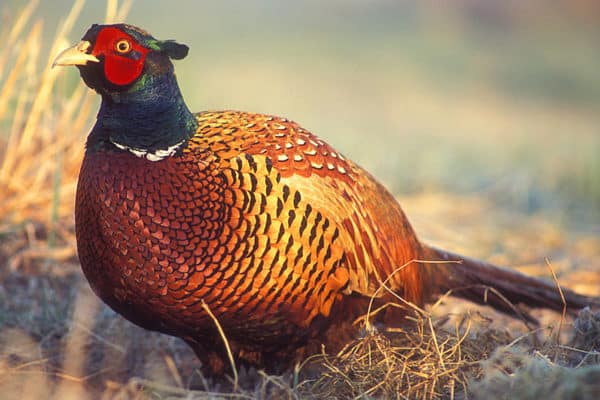 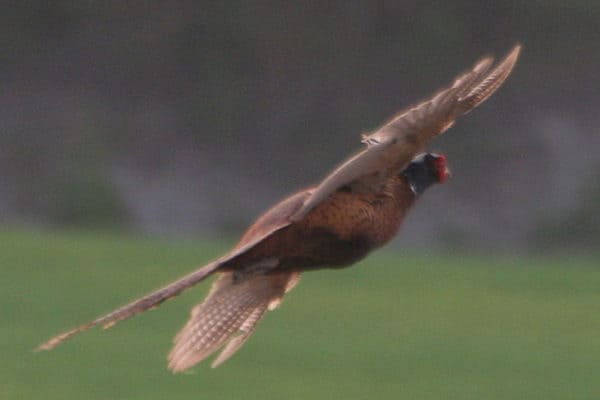 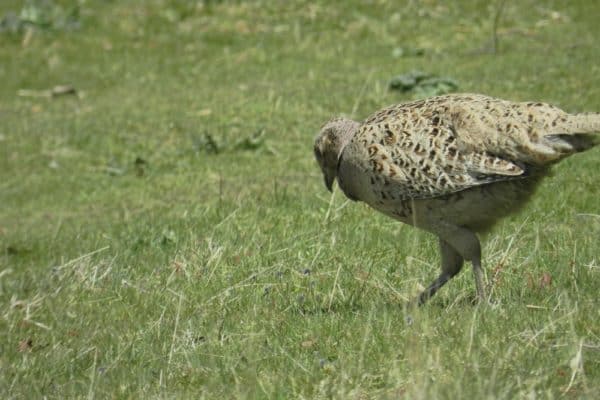 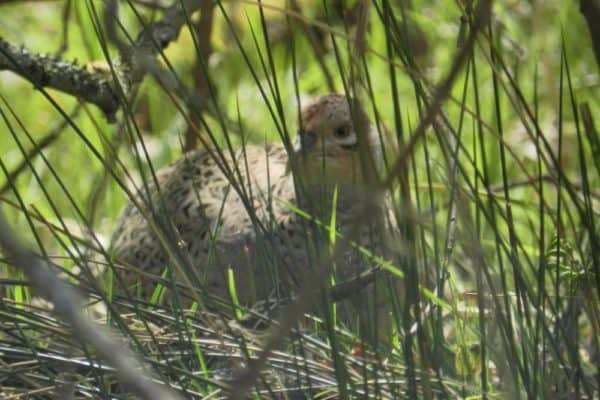 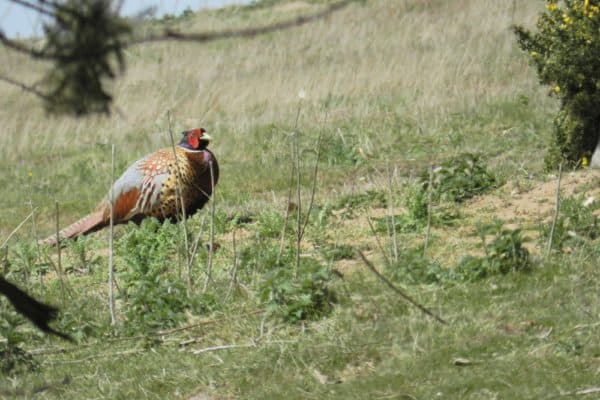 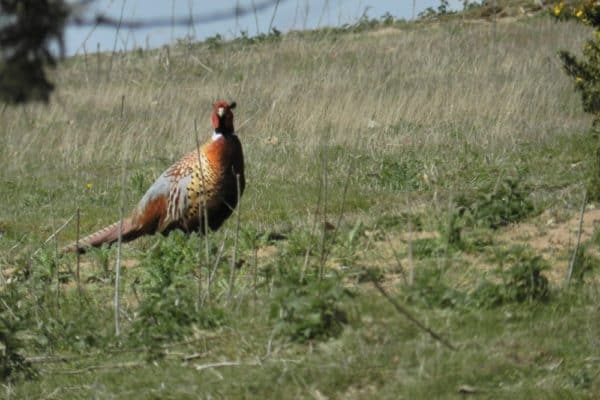 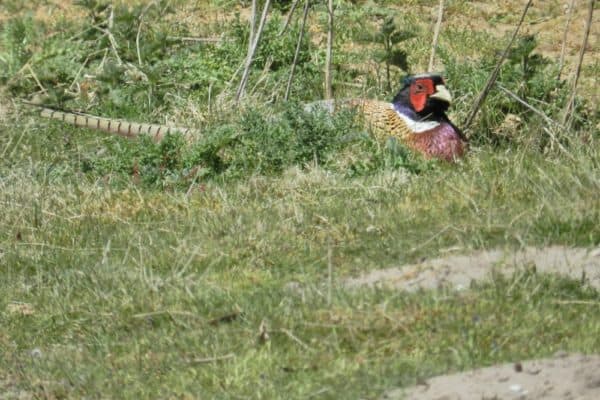 View all of the Pheasant images!

Pheasants are gorgeous game birds that feature beautiful plumage and long, powerful legs. There are an estimated 49 pheasant species, but the common pheasant, the Golden Pheasant, the Reeves’s Pheasant, and the silver pheasant are some of the most well-known types. The bird comes from Asia, and it was brought to the United States during the 1880s. Pheasants are able to fly, but they’re clumsy at it and prefer to be on the ground. It is the state bird of South Dakota.

• The bird species has a long gorgeous tail

• Pheasants taste like chicken but have a slightly sweeter flavor

The scientific name for the common pheasant is Phasianus colchicus, and the bird is in the Phasianidae family. The bird is also in the Aves class. Its species name is colchicus, which is a Latin word that means “of Colchis.” In the past, Colchis was a country located on the Black Sea. Today, it is the country of Georgia. An alternate name for the common pheasant is ring-necked pheasant. There are approximately 30 subspecies of these birds. You can identify a subspecies bird by its male plumage. In particular, you’ll be looking for a white ring around the bird’s neck or a lack of one. The bird’s genus name is from the Latin word “phasianus.”

Male and female pheasants look very different. Male birds, which are also called cocks and roosters, feature vibrant red masks across their faces. Their faces are surrounded by shimmery green feathers located on the sides of their heads. Females are generally unadorned and are typically a plain buff shade of brown. The basic coloring of females keeps them more camouflaged from predators. Both males and females have long, pointed tails. The tail of the bird is often half of the bird’s total length. When a pheasant believes itself to be in danger, it will emit a coarse croaking noise. The birds also have strong leg muscles that help them run away from predators.

An adult bird measures around 21 inches to 34 inches in length. The birds have a wingspan that ranges from 28 inches to 34 inches, and they weigh from 2 pounds to 3 pounds. When it comes to traveling from place to place, these birds prefer to walk or run. They’re not slow. In fact, the birds can run up to 10 miles an hour. If you should startle one, it may erupt from its hiding place and fly into the air at a speed of up to 50 miles an hour.

The Golden Pheasant, which is also called the Chinese Pheasant, is a stunning bird. Like common pheasants, males and females are different in appearance. Males are from 35 to 41 inches long with their tails making up more than half of a bird’s total length. Females are a bit smaller than the males. They range in size from 23 to 31 inches long. The tail of a female is about half of her length. The wingspan of this type of pheasant is around 27 inches. This type of pheasant weighs about 1 pound.

Roosters feature bright coloring that includes a golden comb tinged with red. This coloring starts at the tip of their heads and along their necks. The bird has a bright red undercoating, a light brown, long banded tail, and dark wings. Their lower back is golden, and their upper back is green. Males have bright yellow eyes. Their throat, face, and chin are rust colored while their wattles, skin, beak, legs, and feet are yellow.

Females are not as brightly colored. The females have speckled brown feathers as well as light brown faces, breasts, throats, and wings. Their feet are a light yellow. Also, female Golden Pheasants are less fluffy than the males are.

The bird species do not have sweat glands. If they become too hot, then they will pant in the same way that dogs do to expel any extra body heat. As with other creatures including people, these birds don’t like being out in the bad weather. Instead of going out, the birds will remain in their roosts for days at a time without eating.

These birds don’t migrate. You might find the birds hanging out alone or in small groups. Males can be aggressive when they’re establishing breeding territories. To eliminate dirt, oil, dead skin cells, and old feathers, they will give themselves dust baths.

These birds live in a wide range of habitats ranging from sea level to mountain areas that are 11,000 feet high. The birds reside in grasslands, deserts and forests. Despite being adaptable to diverse habitats, the birds prefer certain kinds of environments for particular activities. For instance, in the spring and summer, they roost in dense shrubs and trees. When fall arrives, the birds move to farm fields, forested wetlands and weedy places. Early season nesting causes the birds to look for shelter along fence lines, ditches, and grassy roadsides. As vegetation starts to grow denser and taller in the spring, pheasants move their nesting activities to alfalfa fields and hayfields. These birds nest on the ground, but at night, the birds roost in tree branches.

The Golden Pheasant is native to the mountain areas of Western and Central China. People introduced this type of pheasant to the UK about 100 years ago.

The diet of the ring-necked pheasant varies with the seasons. During the winter, the birds eat roots, berries, grains, and seeds. When summer arrives, they chow down on insects, spiders, and fresh green shoots. If they’re being raised for food or sport, then it takes about 100 pounds of feed, which is about as heavy as a kangaroo, to sustain 50 chicks for 6 weeks. This amount is an estimated 2 pounds of feed for each bird during the first six weeks. As the birds reach 6 weeks to 20 weeks of age, each bird will need to eat about 1 pound of feed every week.

While pheasants may eat earthworms in the wild, don’t give your birds worms if you’re raising pheasants. Worms can be a health risk because they may transmit the eggs of a number of harmful parasites.

Animals that prey on young pheasants include owls, foxes and hawks while skunks and raccoons like to feed on pheasant eggs. Owls and hawks are able to target the birds easily during the winter because the snow decreases a pheasant’s ability to hide. While pheasants are not currently at risk of becoming extinct, the bird populations are decreasing from habitat losses and excess human hunting. In fact, in their natural habitats, hunters have caused the birds to come close to extinction. People are responsible for habitat destruction and egg collecting.

Pheasants are also at risk from avian influenza, which is a disease that affects domestic birds and those in the wild. When a bird becomes infected with the disease, they can spread it to others from their saliva, feces and nasal secretions.

Pheasants typically start their mating ritual late in March, and it peaks in May. During this time, male pheasants claim their territories. These vary in size from a several acres to areas that measure a half section or more. To attract a female, the rooster will crow and strut. If another male should enter his territory, then he will attack. A male bird will also beat his wings rapidly, showing a hen that he is strong and powerful. Therefore, his offspring will be strong and powerful too.

Ring-necked pheasants make their nests under a hedge or within dense cover. They line their nests with leaves and grass. Sometimes, the female birds will nest inside a nest that another bird has abandoned. Male pheasants are polygynous and frequently have a harem that includes several female birds.

Pheasants produce from eight to 15 eggs. They are able to have as many as 18 eggs, but in most cases, they have from 10 to 12. Pheasant eggs are olive colored, and the female birds lay them throughout a two to three-week period from April to June. For pheasants, the incubation time is around 22 to 27 days. Once baby pheasants have hatched, they will stay by their mother for a few weeks. However, they will leave the nest at just a few hours old. Chicks are born with their eyes open. They are also covered in down.

Like other birds, baby pheasants are called chicks. After they hatch, chicks grow fast. They’re able to fly when they’re just 12 to 14 days old. Chicks look like adult pheasants once they reach 15 weeks old. Chicks will eat the same things as adults. They dine on fruit, grain and leaves along with caterpillars, grasshoppers and other insects.

Pheasants are a prey bird, and as such, they must confront major mortality sources that start from the time that they are inside an egg within a nest. During a mild winter in a protective habitat, pheasants have a 95% survival rate, but during a severe winter, the birds have a 50% survival rate. If a winter is mild and the birds are in a poor habitat, they have an 80% survival rate. If they are dealing with a harsh winter in a poor habitat, then their survival rate is just 20%. In the wild, pheasants live for 1 to 2 years. When they’re kept in captivity, they live for as long as 18 years.

The pheasant population is decreasing in many places. During the ‘60s and ‘70s, more than 250,000 hunters killed over a million of them a few times each year just in the state of Illinois. Changes in farming and how people use land has caused a big decline in the pheasant population. In the year 2000, an estimated 59,000 hunters killed around 157,000 birds. For the 2017 to 2018 hunting season, approximately 12,500 hunters harvested almost 34,000 wild birds.

The pheasant population is different state by state. In 2018, Iowa reported better bird numbers. Following a survey, a pheasant assessment team reported that they were finding an average of 21 birds for every 30 miles. For that year, the state estimated that it had 250,000 to 300,000 roosters.

Are Pheasants Carnivores, Herbivores or Omnivores?

Since pheasants are birds, the taste of them is generally compared to chicken. However, the birds usually live in the wild, and because they are omnivores, they will eat almost anything edible, and what they eat influences how they taste to you. If you eat one, it will likely remind you of chicken, but pheasant meat is usually gamier and sweeter in flavor.

Where do Pheasants Live?

Pheasants live throughout the world because of human intervention.

What Kingdom do Pheasants belong to?

Pheasants belong to the Kingdom Animalia.

What phylum do Pheasants belong to?

Pheasants belong to the phylum Chordata.

What class do Pheasants belong to?

Pheasants belong to the class Aves.

What family do Pheasants belong to?

Pheasants belong to the family Phasianidae.

What order do Pheasants belong to?

Pheasants belong to the order Galliformes.

What genus do Pheasants belong to?

Pheasants belong to the genus Phasianus.

What type of covering do Pheasants have?

Pheasants are covered in Feathers.

What are some distinguishing features of Pheasants?

What do Pheasants eat?

What are some predators of Pheasants?

Predators of Pheasants include foxes, dogs, and humans.

What is the average clutch size of a Pheasant?

What is an interesting fact about Pheasants?

Female Pheasants lay between 8 and 12 eggs per clutch!

What is the scientific name for the Pheasant?

The scientific name for the Pheasant is Phasianus Colchicus.