Adult Hercules moths don’t eat since they don’t have mouths. 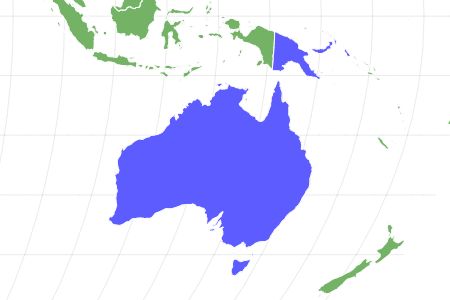 View all of our Hercules Moth pictures in the gallery.

View all of the Hercules Moth images!

An adult Hercules moth has a wingspan of 27cm (11 in) making it the largest moth in the world in terms of wing area!

It has an adult lifespan of only 10-14 days where its main objective is to find a mate and reproduce. The female will emit a pheromone that can attract a male from 2km (1.2mi) away. Hercules moths don’t have a mouth and will not eat, but survive on food stores from when they were caterpillars.

Hercules moth is a moth of the family Saturniidae and belongs to the order Lepidoptera. Saturniidae includes some of the largest species of moths in the world with almost 2,300 species.

Adults of this species are characterized by big wings with lobes, heavy bodies covered in hair-like scales, and little to no mouthparts.

Some of the more notable of the many species include:

Appearance: How To Identify Hercules Moths

The Hercules moth is very hard to miss. It is the largest moth in the world in terms of wing area with a wingspan that can reach up to 27cm (11 in). Many people have actually mistaken them for birds. This makes sense since the largest-ever Hercules moth had a wingspan of 36cm (14in)!

You can easily identify a Hercules moth by its golden brown and white color, with transparent spots on the wing sections. Adult males have the corners of their wings stretched into two “tails.” The males are smaller than the females and have different antennae. Male moths have thick antennae and female moths have thin, thread-like antennae. While you may see them flying around sometimes, they try not to fly more than they have to since they are relying on food stores for energy. You will likely see them perched on trees while they are looking for mates.

Before it becomes this giant of a moth, the caterpillar is easily recognizable by its pale blue or green color with red spots on its side and yellow spikes along its back. This caterpillar grows up to 12 cm (about 4.7 in) and will weigh around 29 grams in its final stage before it cacoons. These caterpillars also have 2 large false eyes on their ends to confuse potential predators.

Habitat: Where to find Hercules Moths

Lucky for those who do not like moths, the Hercules moth is only found in New Guinea and in Northern Australia. These tropical regions are perfect for these moths who spend most of their lives as caterpillars eating leaves in the rainforests. Hercules moths have a relatively short lifespan so they will spend their adult life in rainforests finding a mate to reproduce with. Unlike most moths that you will find near your porch lights, these moths will stay in the rainforests for the most part. They will not expend more energy than they need to in order to find a mate. You can find these gentle giants at the Queensland Museum if you want to see some up close.

Diet: What do Hercules moths eat?

Of course, since the Hercules moth is one of the largest of its species it makes sense that as a caterpillar it would need quite a bit of food to grow. A Hercules moth spends 3 months which is the majority of its life as a caterpillar but it can stay in this stage for up to 2 years. It feeds on the leaves of rainforest trees such as the red bean trees (Dysoxylum mollissimum molle) and cheese trees (Glochidion ferdinandi) but its preferred leaf comes from the bleeding heart tree (Homalanthus populifolius). Although it lives in the rainforest with a wide variety of leaves available, it only eats about 6-7 species of plants. At the Australian Butterfly Sanctuary, they will actually cut down one tree for every 12 Hercules moth caterpillars!

As an adult, the Hercules moth uses the stores from when it was a caterpillar as fuel. It has no mouthparts and therefore does not feed as an adult.

What eats the Hercules moth?

As a caterpillar, the natural predators for Hercules moths are mainly birds, but some other insects such as beetles or wasps often eat caterpillars. Along with these predators, there are also many reptiles, toads, and frogs that will try to eat this caterpillar, but the 2 eyes on their backside help to deter predators. Even as adults, birds such as black butcherbirds are the main predators of this giant moth, but bats are also known to prey on these moths.

These moths although very large are extremely harmless. If you happen across one it is best to leave it be as it is only trying to find a mate. And with no mouthparts, there is nothing to fear!

The Hercules moth has two main functions in its life, to eat as much as possible, then reproduce. As a caterpillar, it needs to eat as much as it can because this will be the fuel to keep it alive once it becomes an adult.

A female Hercules moth can lay between 80-100 eggs in the same tree as its main food source. Once its eggs are laid they die. These eggs will hatch in about 14 days and a small caterpillar will emerge. A Hercules moth can remain in its caterpillar, or pupal, stage ranging from a few months up to two years, but will generally only stay in this stage for about 3 months.

As an adult, the life of this moth is quite short-lived. A female Hercules moth emerges from her chrysalis with the intention to mate. She will immediately start to release a pheromone. This pheromone can be detected by the males, with the help of their feathery antennae, from up to 2km(1.2mi) away. The good news is that humans can’t actually smell this pheromone. Once the “signal” is picked up the male will find a female and mate. The male normally dies soon after. The female then finds a good leafy tree to lay her eggs, then also dies soon after and the process starts all over. While some Hercules moths can stay alive up to 14 days, the typical time for all of this to happen is only about 4-5 days.

Where are Hercules moths found?

Hercules moths are not dangerous at all. If you see one it is likely on its way to mate as its lifespan is only about 4-5 days long on average.